It’s a tremendous shame that British food has gained such an internationally dreadful reputation, yet it’s hardly surprising. Alongside a bland curry originally made from gravy, yogurt and tinned soup, the Sunday Roast stands out as one of our most prominent national dishes. Generally served as a late lunch, with portion sizes vast enough to […] 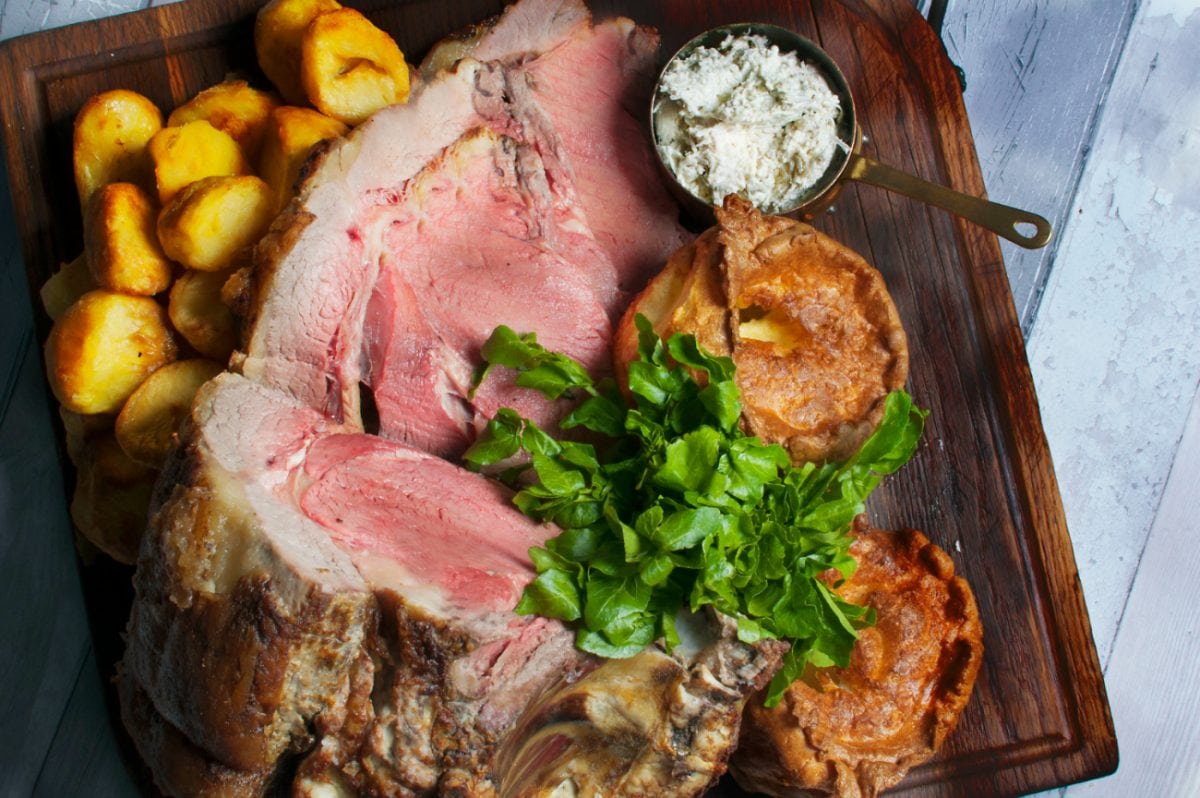 It’s a tremendous shame that British food has gained such an internationally dreadful reputation, yet it’s hardly surprising.

Alongside a bland curry originally made from gravy, yogurt and tinned soup, the Sunday Roast stands out as one of our most prominent national dishes. Generally served as a late lunch, with portion sizes vast enough to see us through to the following weekend, the roast dinner is essentially a collation of ingredients slung into the oven then left for at least an hour longer than necessary. The real problem with preparing meat this way is that it’s devastatingly easy to overcook.

When executed properly, however, a roast dinner is a thing of beauty. Something to instil pride. Alas more often than not, it is a culinary car crash – yet so many of us insist on eating it at least 52 times each year. In theory, the average Brit will eat more than 4000 roast dinners throughout an entire lifetime. That’s an incredible amount of half-soggy-half-crispy potatoes, torrid stuffing and vegetables boiled so zealously that their inclusion is entirely in vain.

Overlooking Borough Market from the first floor of the old Flower Hall, Roast Restaurant is so proud of its heritage that it’s named after the widely celebrated dish. Considerably more refined than a Carvery, it is an establishment that strives to prove roast dinners are not merely for Sundays, or for the tastefully exempt.

As a restaurant, it’s clear that Roast is best suited to Sunday lunchtime visits, or for an early breakfast before scouring the market produce on offer downstairs. Just be sure to visit before shopping. This way, you’re less likely to spend heaps of money on meat that’s had its hind massaged with phoenix feathers, or that’s been serenaded by mythical sirens to increase its value.

Inside, the restaurant is unbecomingly vast with space for over 120 covers, and it’s completely full during our Friday lunch visit. Although tables are relatively close together, the upper-level dining space is flooded with natural light spilling through the windows overlooking the market, St. Paul’s Cathedral and London Bridge Station, lending a sense of space. As for the food, the starters read like my favoured Death Row menu, so it takes a while to decide.

In choosing, we notice an exclusively Kentish beer menu and choose to narrow our food choices over a drink. A light lager from Chapel Down Winery in Tenterden is pleasant, but with far too much effervescence for my personal taste, though my companion is impressed. Roast’s exclusive East India Pale specially brewed by the Whitstable Brewery, on the other hand, has a complex malt base that’s prominent throughout. By nature, the beer has far less hop dominance than the EIPA label would suggest, but it’s a refreshing start to the meal. 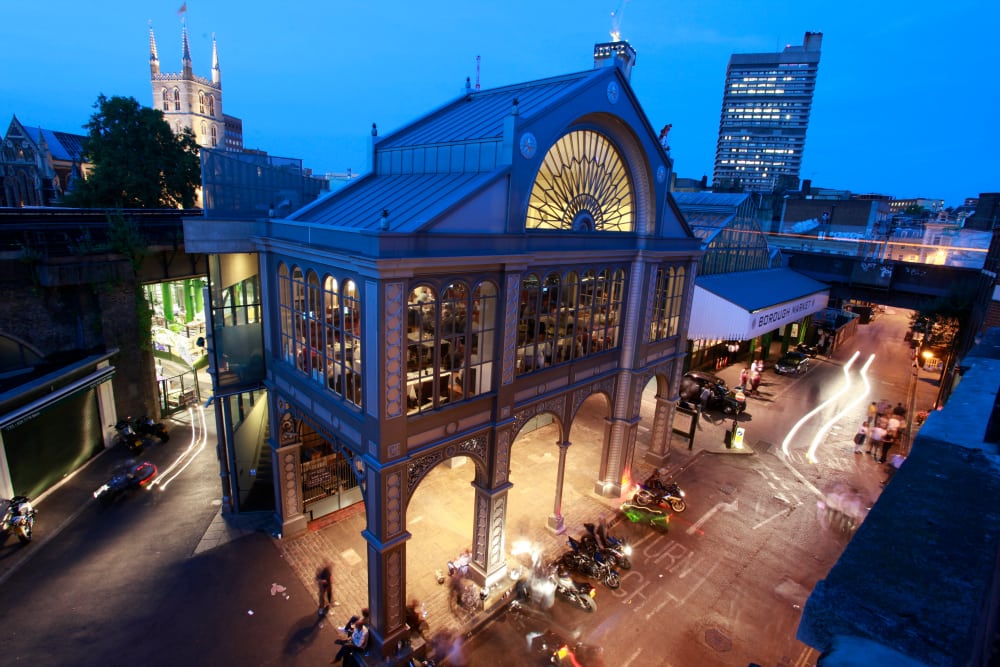 From the kitchen, three scallops are served with salsify (which tastes like oyster) and a decadent butter sauce. These are accompanied by a generous handful of samphire and segments of sharp blood orange. Though the samphire is cooked well and complements the scallop, the scallops have an astringent bitterness from over-caramelisation. On the other hand, the blood orange, alone, is delightful but its acidity completely overpowers the rest of the dish. Far better is Scotch egg made with haggis and Lorne sausage. The composition is simple, but the execution is as close to perfection as can be expected from the busy lunch service. The egg is soft boiled with a rising sun-coloured yolk, the meat is rich but not overcoming, and the breadcrumbs are crisp but not dry.

The mains section of the menu is proudly steeped in British cuisine, and although options besides roasted meat are available (plus the brand new ‘Ultimate Roast Burger’) it feels wrong to order otherwise. Friday’s weekly special is roasted rib of Welsh Black beef with Yorkshire pudding and roast potatoes. A similar roast beef dish is available throughout the week, yet this particular choice focuses on a more premium cut of beef with focus on sourcing. We’re told that the rib of beef is cooked each day to an initial medium-rare, but can also be cooked for longer upon request.

I opt for medium-rare, but the meat arrives having been cooked closer to a medium or medium-well. Regardless, the meat’s quality is inescapable, with a fair portion size and marbled fat that melts on the tongue – if only the poor cow could have been rescued from the oven ten minutes earlier. Alongside the beef, thick gravy is rich with enough red wine to discolour one’s teeth and a generous crack of black pepper, working exceedingly well with the beef. To accompany the dish, a glass of Argentinian Ruca Malen Malbec is recommended by the Sommelier, and pairs perfectly. Elsewhere, roast potatoes are crispy though dry and the Yorkshire pudding resembles a misshapen soufflé, yet tastes fantastic.

Another roasted meat dish boasts a remarkably generous serving of rolled pork belly with a prominent taste of woody herbs (presumably used as a stuffing) and crackling that crunches but doesn’t call for titanium dentures. Again, the meat is somewhat overcooked, although the taste is generally favourable, as is the case with creamy accompanying mashed potatoes. We finish with sticky date pudding slathered with tooth-achingly sweet caramel sauce, though the sponge is surprisingly light. In contrast, flourless orange and almond cake is resplendently airy, joined with tart rhubarb and lemon rind-flecked yoghurt ice cream. Alongside the rhubarb, the ice cream works as a formidable palate cleanser.

The food served at Roast is of a generally good standard, and the overall lunch experience is favourable. While roast dinners served here are relatively expensive, they’re far superior to those from most over-priced gastro pubs. Instead, they’re closer to refined versions of home-cooked roast dinners, forgoing the need to spend time cooking, or washing up.