A London fine-dining institution, lunch at Michelin-starred Galvin La Chapelle, behind Spitalfields, is an absolute delight. Instead of serving an exclusive menu of (often pompous) haute cuisine, the restaurant offers some of the best French gastronomic delights available in London, alongside one of the most stunning settings. The grade II listed location of brothers Chris and Jeff […] 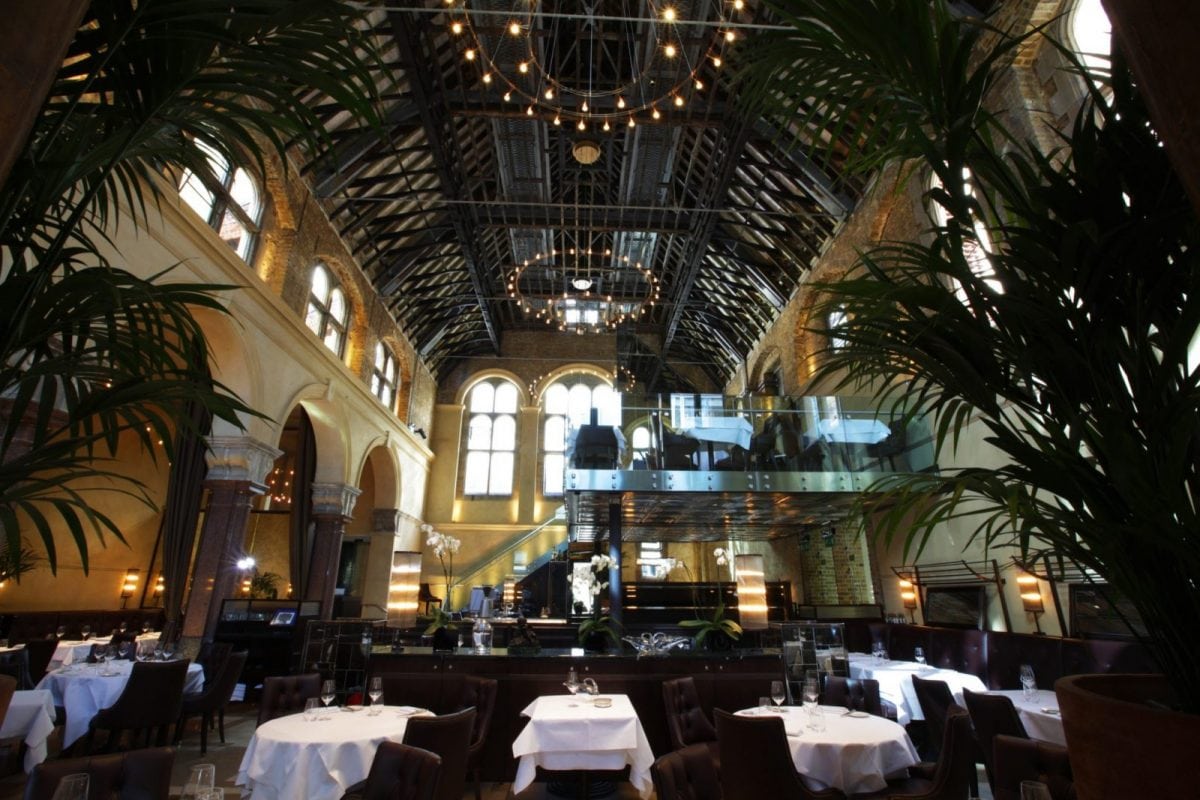 A London fine-dining institution, lunch at Michelin-starred Galvin La Chapelle, behind Spitalfields, is an absolute delight.

Instead of serving an exclusive menu of (often pompous) haute cuisine, the restaurant offers some of the best French gastronomic delights available in London, alongside one of the most stunning settings. The grade II listed location of brothers Chris and Jeff Galvin’s third restaurant has a long colourful history. At the end of the 19th century, the building was used as the parish of Bishopsgate and the central foundation school for girls. The structure then served as a parish hall and gymnasium. After remaining in a derelict state for 17 years, however, the space was acquired by the Galvin brothers in 2009 and underwent a huge refurbishment before opening as a restaurant. Although the rest of the building has been renovated, most of the wooden ceiling beams and granite pillars remain original – now joined by plush chocolate leather seating, spaciously arranged tables and an abundance of natural light that cascades through the lofty windows.

Contrasting the rough wooden ceiling beams and flooring, the tables are dressed with the table linen white as the driven snow and immaculately polished cutlery, plus service that’s perhaps unusual for a restaurant of this type. Although respectful and well-informed, the service at Galvin La Chapelle refrains from becoming fusty or supercilious. Instead, all members of staff (across two visits) are friendly, helpful and happy to engage in conversation: efficient but without suffocating us at the table. The food served, on the other hand, is a culinary tour of the globe. Although deeply rooted in classic French technique, the menu contains nods to Mediterranean cuisine, as well as some welcome colonial Moroccan influences.

The ‘Menu Du Chef’ – a set menu with three choices for starters, mains and dessert – offers some of London’s best value, priced at £29 for two courses, or £34.50 for three, available at lunch and for an early dinner (until seven o’clock). On one visit, the regularly changing menu featured the likes of lightly charred mackerel fillet accompanied by pickled Tokyo turnip and cucumber, each of which cut through the fish’s natural oiliness. A selection of beetroot, on the other hand, showcased the vegetable with a range of different textures and preparation techniques, joined by crunch of walnuts and lactic goat’s curd. A main of wild garlic risotto seemed aesthetically underwhelming, but delivered a punch of flavour that seemed impossible from a vegetarian dish. Less morally outgoing, calves’ liver was overcooked and coated in a sauce of heavily-smoked Alsace bacon, completely overpowering the rest of the dish. All can be forgiven, though, when considering the simply remarkable dessert of poached rhubarb with a butter oat biscuit which crumbles on the tongue.

The a la carte menu here is considerably more expensive, but offers a number of incomparable dishes. First, often under-appreciated lamb sweetbreads (£22.50) are cooked to perfection, sliced and fanned across a large white plate. The golden-brown outer of the sweetbreads, here, is complemented by a vivid glow of orange presented by ribbons of slightly al dente carrot and a pistachio and sherry ‘velouté’ (actually more of a puree) that exudes flavour. The best starter sampled, no less, vaunts a tentacle of octopus (£21.50) that’s curled slightly on the grill. Again, the cooking of the octopus is astounding, soft inside but well-charred, perched atop a bed of vegetables that looks similar to the famous Ratatouille served to critic Anton Ego in the Disney-Pixar blockbuster. It is, perhaps, the best starter available in East London at this moment in time.

A main course of Herdwick lamb (£39) offers three impeccably rare cutlets of lamb, though it’s the Moroccan-inspired pastilla of slowly-braised meat wrapped in filo pastry that’s most alluring, so good in fact that I could have eaten the kitchen’s entire stock. Bresse pigeon ‘tagine’ (£36.50) is also served with a pastilla, much to my delight. Presented within a clay tagine pot, the dish is less of a classic tagine than the menu may suggest, but a modern, refined take on a Moroccan custom. The pigeon breast element of the dish is cooked properly, served atop a cradle of fluffy couscous spiked with fragments of preserved lemon and soft-boiled quail’s egg. I do not dislike the preserved lemon element – I hate it. Salty, sharp and sour, the preserved lemon has no place here. Though fairly traditional, the flavour is so overwhelming it completely knocks the balance of an otherwise faultless dish. Thank heavens for that pastilla of melt-in-the-mouth leg meat which harbours a little sweetness.

To finish, banana soufflé (£12.50) looks too good to be true, yet still tastes strongly of banana without any residual flavour of scrambled eggs. Alone, the soufflé is remarkable, but it’s transcended even further by a scoop of silky peanut butter ice cream with flavour that works in harmony with the banana. Across the table, the ‘Poire belle Hélène’ (£12.50) served at Galvin La Chapelle is a nod to Auguste Escoffier’s classic poached pear with chocolate. Here, a terrifically soft, delicate pear is poached and placed on top of a crumb base, covered with a sphere of chocolate that’s theatrically dilapidated by a stream of molten hot sauce. The result is a success: in contrast to the refreshing pear, the chocolate is a decadent conclusion that elevates the dish with a dumbfounding level of richness, naturally.

Alongside the food that’s mostly world-class, the service and atmosphere – Galvin La Chapelle proves that, above all, fine-dining can be accessible. Yes, the a la carte menu is expensive, but lunch or dinner here is amongst the available in this part of the city, topped with an undeniable sense of occasion and a genuinely refreshing atmosphere.