Just a couple of years ago, the notion of opening a successful, trendy café off the main drag of Balham High Road would have perhaps seemed unthinkable to anybody without a SW12 postcode. Yet what with nearby Brixton unexpectedly becoming the place to eat, with Clapham not far behind, it was only a matter of […] 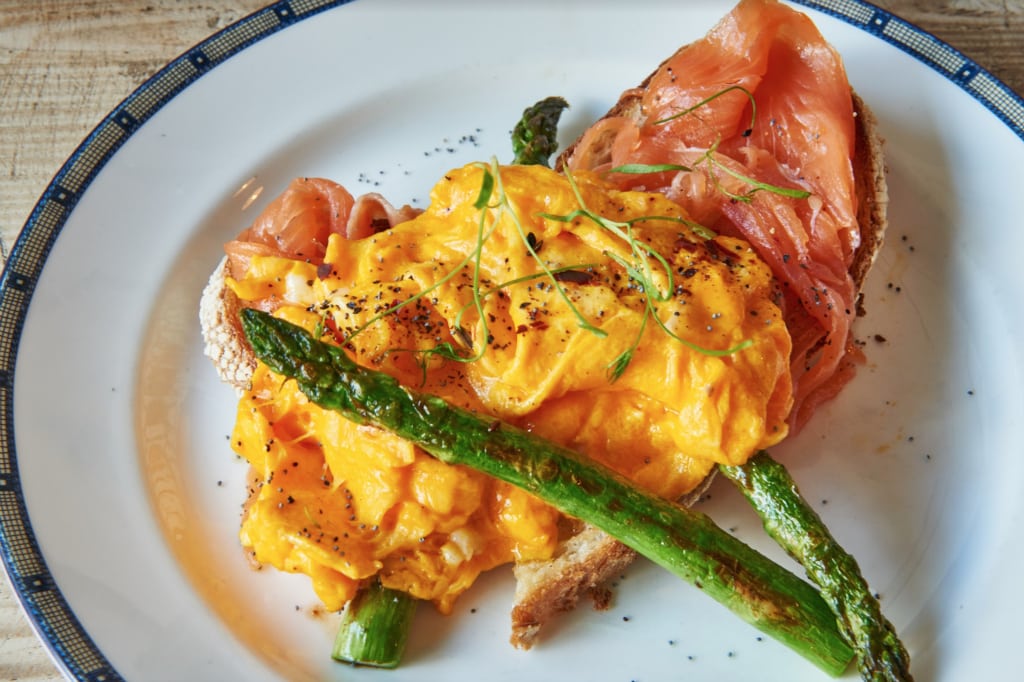 Just a couple of years ago, the notion of opening a successful, trendy café off the main drag of Balham High Road would have perhaps seemed unthinkable to anybody without a SW12 postcode. Yet what with nearby Brixton unexpectedly becoming the place to eat, with Clapham not far behind, it was only a matter of time before the surrounding areas would begin to follow suit.

Set up by three friends and launched earlier this year, Brother Marcus is stylised as a “garden café”, sandwiched between a taxi rank and a branch of Dirty Burger, just seconds from Balham tube station. Like many of the cafes that line the streets of Shoreditch, Stoke Newington and Dalston, the interior of Brother Marcus is humble and understated. It does, however, seem like the sort of place where one can request a MacBook charger to accompany their flat white, slice of gluten-free cake, and can of unfiltered, unpasteurised and locally sourced craft ale, all without sounding too precious.

Rough wooden tables and benches are joined by bare hard wood floors and a colour scheme of stone greys and vanilla. Meanwhile, on-trend Edison light bulbs hang somewhat unnecessarily, given the amount of natural light that floods the space from the windows that open completely, allowing the sound of rattling pushchairs and contemptibly loud bass leaking from passing cars to join Brother Marcus’ Friday afternoon soundtrack that’s exclusively filled with cuts from The Smiths’ back-catalogue. As far as the food is concerned – brunch is served daily and there’s a lot of attention to produce that’s organic, seasonal and of exceptional quality. There’s also a prominent focus on coffee, alongside a strong cocktail list, favouring social and environmentally friendly Caravan green coffee. Brewed for 16 hours, filtered twice and served over ice with a slice of lemon, the menu’s BM cold brew, for instance, is remarkably heady. After just one sip, the thought of sprinting home to the other side of London doesn’t seem unreasonable.

The brunch menu, on the other hand, includes various foods served on toast, with the ‘Brother Special’ delivering a thick wedge of lightly toasted sourdough topped with smoked salmon, al dente asparagus spears, a smattering of chilli flakes and scrambled eggs the colour of a tropic sunset, sourced from a farm in St. Ives. The colouring is actually due to trace addition of paprika to the hen’s diet, juxtaposed to the artificial dyes that are controversially used all too often. The sandwiches section of the brunch menu is also impressive, with the ‘Giddy Aunt’ and its show-stealing beetroot and feta fritters, courgette, rocket and tomato, plus the playfully named ‘Mother Clucker’ with chicken, bacon, fresh avocado, tomato and Greek yogurt. Both are delicious, provide good balance of flavour, and are surprisingly filling.

To finish, a large helping of French toast was plenty for our party of three, combining rich flavours of sweet cinnamon and egg-soaked bread with fresh blueberries, strawberries and raspberries, all bathing in a pool of maple syrup. The food at Brother Marcus is simple, but it’s generally very good, well-priced and mostly guiltless. And teamed with great cocktails, even better coffee, plus a hospitable atmosphere – what more could anybody desire from a friendly neighbourhood brunch spot?