Bronte is the second venture from father-son duo Trevor and Adam Davies and judging by the success of their first project (Circus in Covent Garden), it has a lot to live up to. The brainchild of ‘cook to the stars’ Executive Chef Andrew Lassetter and Head Chef Guy Betteridge (previously of Gordon Ramsay Group), Bronte’s […] 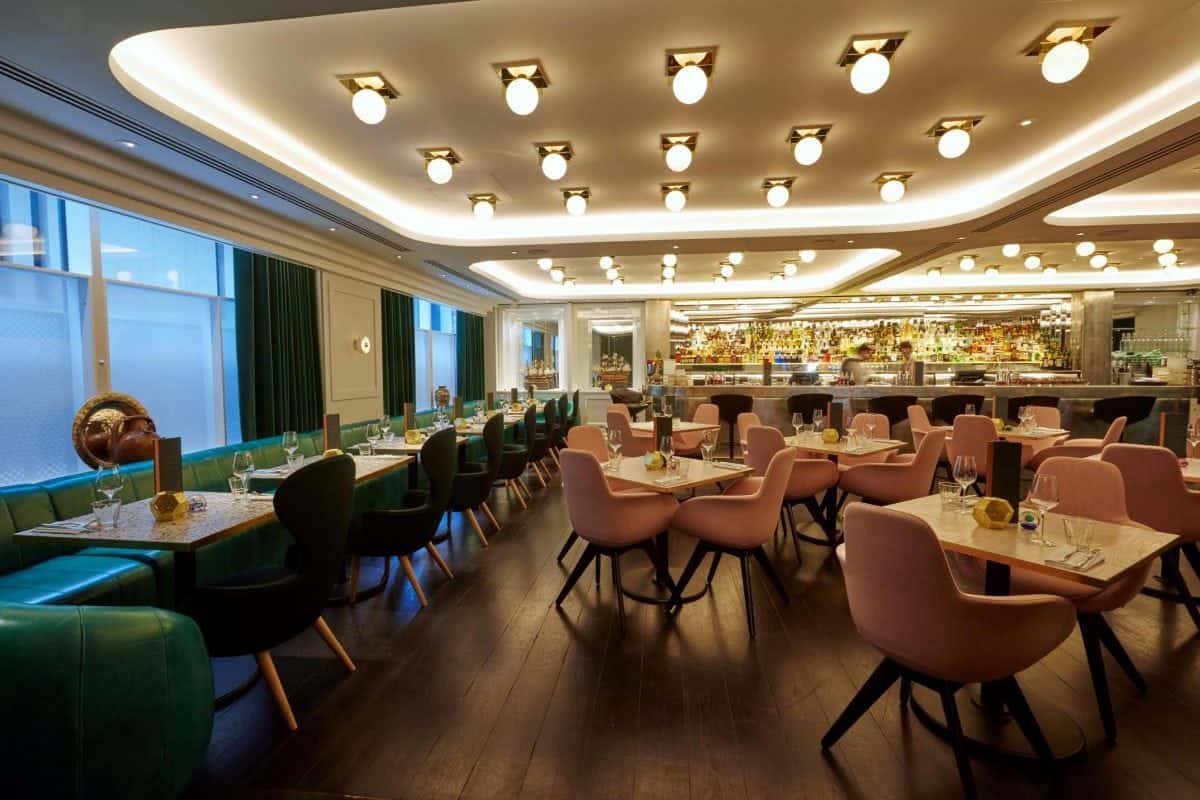 Bronte is the second venture from father-son duo Trevor and Adam Davies and judging by the success of their first project (Circus in Covent Garden), it has a lot to live up to.

The brainchild of ‘cook to the stars’ Executive Chef Andrew Lassetter and Head Chef Guy Betteridge (previously of Gordon Ramsay Group), Bronte’s menu promises a ‘sumptuous selection of Asian and modern British dishes’. Quite the compilation. But first, it’s worth pausing for the décor. Designed by Tom Dixon, Bronte’s space is stunning. An enormous bar is highlighted by rows and rows of back-lit bottles, pink concrete, green booths and candy floss pink armchairs (which admittedly sit quite far from the tables, but are fortunately comfortable) and the walls are lined with ‘Cabinets of Curiosities’. It’s eccentric and a little retro, but it works.

Split into ‘four distinct areas’, the space features a restaurant (where we eat dinner); a terrace currently filled with groups of people enjoying many, many drinks; a café; and the mezzanine. While visually striking, the biggest problem is that these areas aren’t distinct at all. The restaurant is in the rearmost section of Bronte, suggesting seclusion from the bar and terrace at the very front. Unfortunately, on a mild June evening the bar is full to the brim and as the evening progresses its atmosphere (and loud music) begins to take over the entire restaurant space – its original oasis dispersing like a fata morgana.

But that comes later. For now, we’re offered a table at the edge of the dining area, brought some water for the table and left alone to make our selection. The menu is, indeed, rooted in a selection of British (steak, pork chop, BBQ chicken) and Asian (maki and tempura) dishes, but the two cuisines are (to my boundless gratitude) kept separate. Perhaps with the exception of Edamame and Kale Pancakes. We begin with chorizo and grilled squid (£4) served with avocado, chilli and a pepper dressing; and Beef Carpaccio (£12) with truffle cream, crispy artichokes, horseradish and chives. The squid is, unfortunately, chewy but the whole dish has pleasant spice from the chorizo. The beef, on the other hand, is excellent. The truffle cream gets lost, but the beef and artichoke crisps are actually perfect on their own.

For mains, fillet steak is ordered medium-rare and served with artichoke puree, parsnip crisps and wild mushrooms (£30). Charred on the outside, but succulent in the middle, the steak is served exactly as requested, requiring very little effort to cut. The artichoke puree and wild mushrooms, on the other hand, bring a welcome earthiness to the dish and the parsnip crisps provide some crunch, in contrast with the beef.

Miso black cod (£34) is also cooked to perfection. It falls apart at the lightest touch but hasn’t lost any of its robustness. In addition, a miso dressing makes the whole thing wonderfully sticky and the radish salad (which I squeeze the lime over) adds freshness. The salad is, in fact, the only slight let down. Parts of it taste unwashed and although advertised as radish and pickled ginger salad, the ginger is missing. I imagine it would bring a welcome heat and sourness to the dish. Regardless, the dish is still remarkable (though, admittedly, I ignore the blackened leek, which seems wholly out of place).

By now, we’ve finished our glasses of Chardonnay and Malbec (both excellent) and peruse both the dessert and drinks menus together. I’m set on a dessert wine, but our waiter suggests a cocktail or a glass of whisky. Having sat near that amazing bar all evening, we allow ourselves to be persuaded. After enquiring about preferences, our waiter departs and returns with a rare Japanese Suntory Yamazaki 12 year-old (£17) on the rocks, smoky and full-bodied. My cocktail is a mysterious tequila-based floral number with a small meringue on top. It’s a long drink, which grows tiresome about halfway through, thanks to its sweetness. Were it served short, it would be spot on.

To finish, pineapple carpaccio with yuzu sorbet (£7) is refreshing: a great end to a great meal. But, with the addition of the yuzu sorbet, the dish cries out for something sweet. Some baby meringues, perhaps? Almond and polenta cake (£7) is light and fluffy with well-balanced flavour. Elsewhere, an accompanying apricot macaroon is sticky and light – a delicious addition.

Overall, the food at Bronte is excellent, though the atmosphere has the habit of becoming tedious. The bar presents a great opportunity for people-watching, I’d imagine – best enjoyed with a whisky or nice glass of wine over the cocktails.