by Tyler Kofman
in Food and Drink, Restaurants 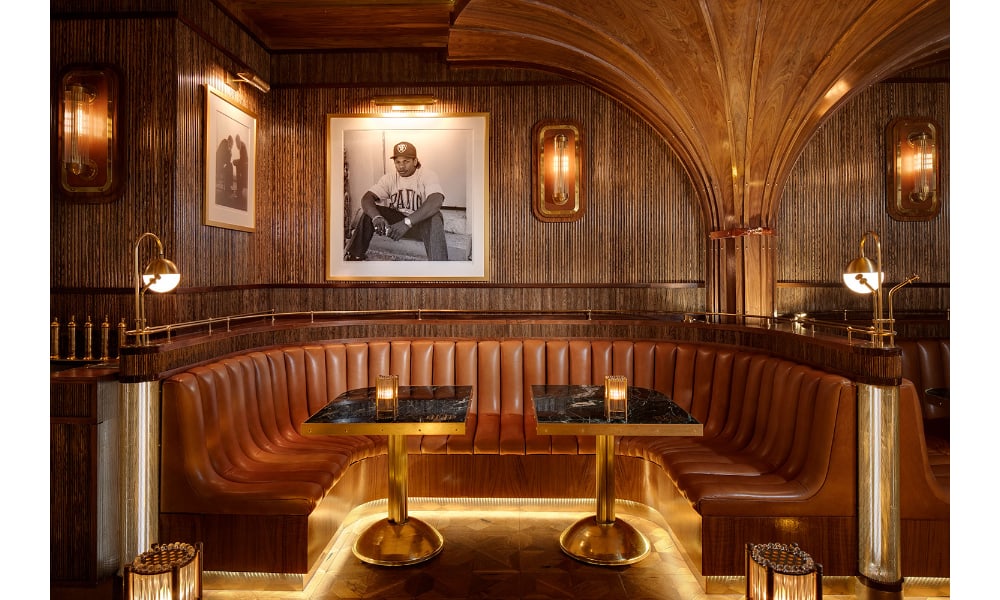 In a city known for shirtless surfers and beach-side fish tacos, it’s safe to say opening a $6.5 million New York-style steakhouse takes serious guts. But for restaurant group Consortium Holdings, it’s just another walk in the park. The group has fostered 12 restaurants and bars since 2007 and each has its special place in the San Diego culinary scene. Although none are quite like Born & Raised, the company’s first foray into extravagant fine-dining.

Regal gold door handles shaped into the letters ‘B & R’ welcome you into the dimly lit, tastefully-designed dining room that transports you back to 1920’s Manhattan. Rich mahogany covers the ceilings and deep, tufted booths allow well-dressed diners a comfortable place to sit; which is important as this isn’t a place you want to leave anytime soon.

If you look beyond the picturesque gold-trimmed dining room, you can’t help but notice the smoke and fire embers that jump in the restaurant’s open kitchen. The walls are adorned with mismatched black and white photos of Hip-Hop stars, NWA’s Eazy-E and the late Ol’ Dirty Bastard of Wu Tang Clan (one of the owners is a big rap fan). Upstairs, just past the open-air bar with views of downtown, the individual toilets are what one would expect from a high-end steakhouse until noticing the gold-etched ‘Shit Happens’ on the seat. Although Born & Raised is classy, the restaurant caters to all walks of life and stifles the typical turn-your-nose-up atmosphere often found at fancier places.

If the atmosphere doesn’t win you over, the food will. The menu includes delicacies like Burgundy snails ($15) sitting in insalubrious bone marrow served with Normandy-style buttered toast. Black caviar is also served by the ounce, or if you’re lucky, as a bump off your hand, just to get the feast started. If you haven’t noticed already, this isn’t a place you’re going to want to be tight on a budget (steaks start at $40). The seasonal crudo ($16) is a must-try, especially considering Consortium Holdings has already captured the seafood scene with Ironside Fish & Oyster, another of their restaurants.

While starters are exciting, be careful not to fill up before the main course. The steak selection is up there with the best in the country. Born & Raised sources from the country’s best purveyors and offers an in-house glass-walled, dry-ageing room that gives diners a visual sense of what they’re getting themselves into. Along with their in-house cuts, the restaurant offers both Japanese and American Wagyu that is generally exceptional. They’re priced at $19/oz and $13/oz respectively, with a minimum 3-oz order required (but order 6+ oz because you’re going to want more).

If you’re all about the finer things in life, feel free to add-on crab legs, lobster, or foie gras and truffles to any steak selection. Of course, what’s a good steak without some sides. The Robuchon potato ($10) will – if you haven’t already tasted late chef Joël Robuchon’s superlative pomme puree – legitimately make you wonder how mashed potatoes can taste so good. Partner that with the classics like a table-side Caesar salad ($14) or coal-roasted leeks ($10) and you’ve got yourself a meal. Top it all off with a treat from the dessert cart that wheels around the towering cheesecake and carrot cake and now you need a wheelbarrow to get you out of there. But before you leave, wander upstairs to the rooftop bar to take in some sights of downtown San Diego with a popular Born & Raised Old Fashioned.

So, was Consortium Holdings risk was worth the reward? Unequivocally so. Born & Raised is a steakhouse that rivals any you’ll find in other American foodie cities like New York or Chicago. In a city not particularly known for its high-end food scene, it’s quietly putting San Diego on the map.