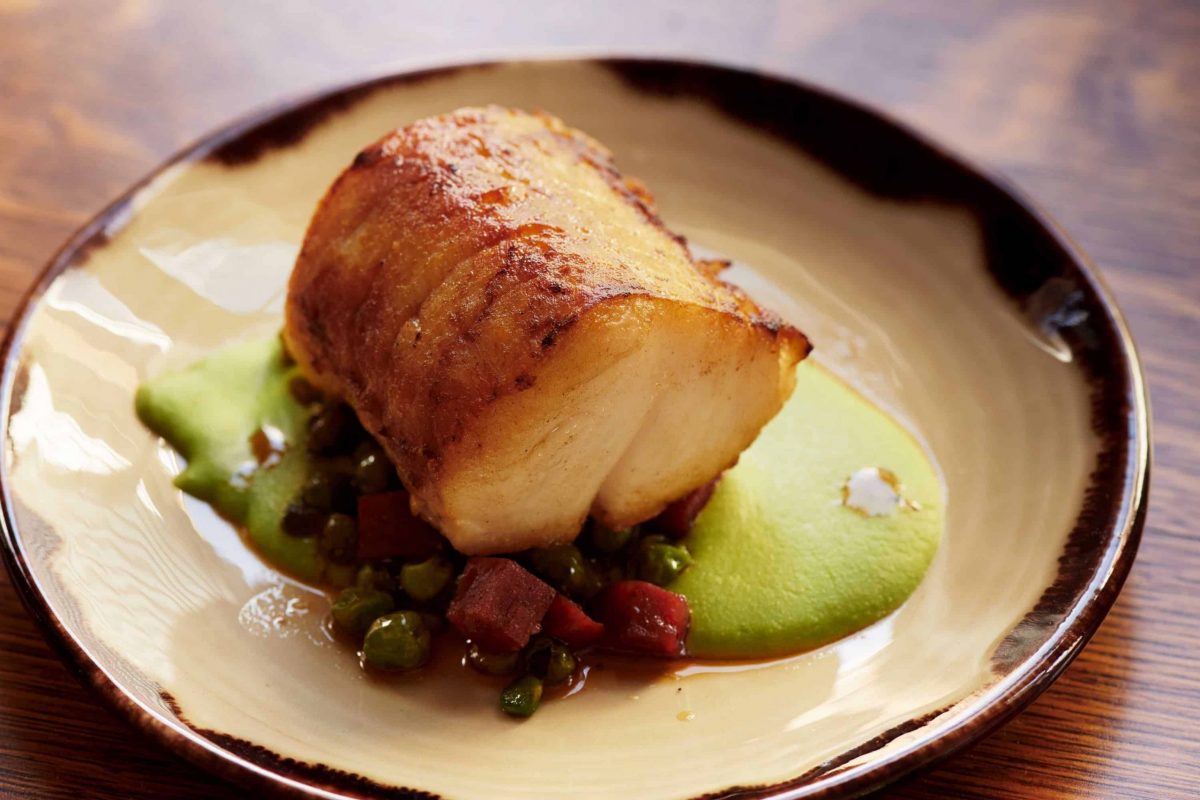 After 15 years of working working for celebrity chef Gordon Ramsay’s restaurant group, Stuart Gillies quietly departed the company last year. Holding various positions in the group, Gillies was eventually promoted to the group’s CEO in 2016 and is credited with making Gordon Ramsay Group’s restaurant portfolio profitable in 2016, after five years of losing money.

Now working on his own project, the chef-turned-restaurateur has opened a new wine bar and restaurant with his wife, Cecilia, occupying a former bank building on Chislehurst High Street. On the surface, the suburban district of south east London (technically in Kent) seems an unusual location to open a solo restaurant venture, but having lived there for a number of years, and having raised their four children in the area, Stuart and Cecilia Gillies’ Bank House has a focus on the local community.

Close to Chislehurst station (just 20 minutes from London Bridge), Bank House is styled as a European wine bar and kitchen. Housed in a Victorian brownstone building, the venue is set across three floors and has been converted. Nods to the building’s history remain in the cellar, with the vault now used to store wine, while the ground-floor and first-floor dining areas are comfortable and modern. Downstairs, a hardwood and aged copper top bar dominates, running the length of the downstairs wall, while upstairs is somewhat cosier, equipped with a modern fireplace. Otherwise, the space is festooned with soft furnishings in warm textures and colours against the oak parquet floors and flashes of exposed brickwork decorated with vibrant contemporary art. In keeping with the accessible décor, service also strikes a likeable balance between friendly and professional.

As for the drinks offering at Bank House, the wine list has been curated by Angelika Oparczyk, who worked alongside Gillies at Gordon Ramsay Group, with a dynamic selection of both natural and English wines alongside some interesting traditional selections, many of which are available by the bottle and on tap. A dedicated section of the list also champions young winemakers from across the continent, including the likes of Vina Ilusion from Spain and Les Vignerons d’Estezargues collective from France. The regularly changing food menu, on the other hand, features an assortment of small, sharing plates with a pronounced European accent. A significant step up from standard wine bar fare, with head chef Bobby Brown (also formerly of Gordon Ramsay Group) heading up the tiny kitchen. Here, most of the ingredients used are sourced from local suppliers.

A recent visit began with a glass of Kentish winery Chapel Down’s sparkling Bacchus, joined by a parade of simple small plates such as fiery ‘nduja generously spread across toasted sourdough and finished with a blizzard of parmesan; smoked anchovies simply drizzled with good olive oil and a smattering of chives; and hunks of warm, piquant chorizo embellished with a healthy drizzle of honey. Simple dishes demonstrating balance and restraint (an underrated skill), allowing the quality of the base ingredients to prevail. Also perfect with the intense, full-bodied Petite Sirah from Ironstone Vineyard in California, available by the glass or bottle.

Even better were a trio of croquetas, cloaked with fine breadcrumbs and plunged into seething oil until practically perfect. Buttermilk fried chicken followed the same blueprint, with chicken portions cloaked by thin, craggy batter, bolstered by a dollop of mayonnaise embellished with a squeeze of lime and piquant habanero. One final fried dish, pea fritters were a very light take on the under-appreciated chip shop dish, heavily seasoned and delightfully moreish. Another highlight came with a small tranche of hake, the cooking of which was exemplary, served with some fatty chorizo dice over a bed of lurid green pea puree spiked with mint, which demanded to be scooped up with an additional side of triple-cooked chips. Finally, a Chislehurst wine bar that’s accessible, serves impressive food and is – ultimately – worth talking about.