Peruvian food is big business in London, with so many Latin American restaurants and ceviche bars constantly launching within the capital. Since opening Ceviche in Soho, in 2012, Peruvian DJ-turned-restaurateur Martin Morales now has a four-strong portfolio of restaurants with strong Peruvian leanings. Morales is also the author of two cookbooks, with a brand new […] 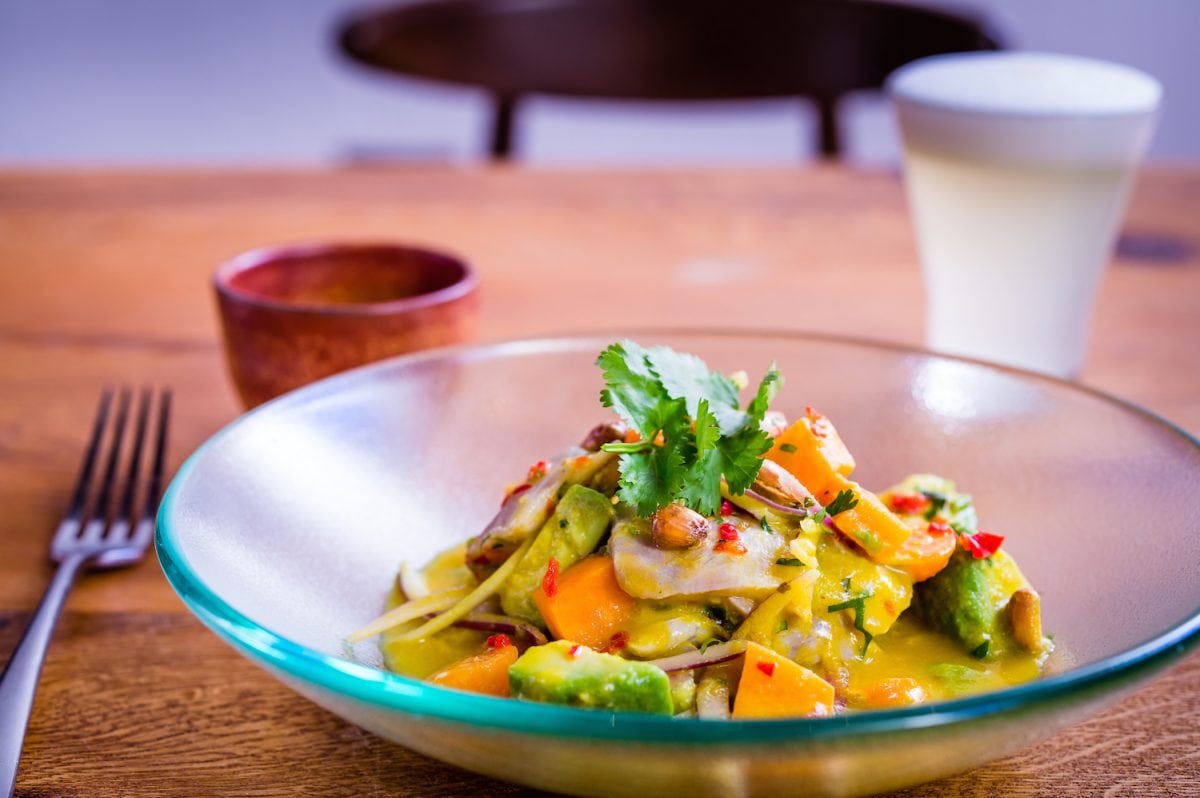 Peruvian food is big business in London, with so many Latin American restaurants and ceviche bars constantly launching within the capital. Since opening Ceviche in Soho, in 2012, Peruvian DJ-turned-restaurateur Martin Morales now has a four-strong portfolio of restaurants with strong Peruvian leanings. Morales is also the author of two cookbooks, with a brand new Andina recipe book published this month.

On the corner of fashionable Redchurch Street and Shoreditch High Street, Andina (Morales’ second restaurant) opened at the end of 2013. A split-level space with a bright café-style ground floor space and cosier downstairs dining room – we sit upstairs at a predictable bare wood table top, overlooking the open kitchen counter which serves ceviche – the restaurant’s clear signature. Open all day, the food served at Andina is heavily inspired by ‘soul food’ and the Picanterias of the Peruvian Andes, hence the name. The brunch offering is allegedly remarkable, while the main menu is vast and focuses largely on clean, ingredient-led dishes, with some bizarre combinations that appear exciting, at the very least. A relatively sophisticated children’s menu is also available.

From the ceviche bar, we order two ceviches which follow a snack of cancha; crunchy and brackish corn, like underdeveloped salted popcorn and a round of Pisco sours. Strongly recommended ceviche Andina comprises a mound of raw sea bass (the menu promises it is sustainably sourced) with a pleasant concoction of fatty avocado and earthy sweet potato. It’s the sharp, acidic Amarillo ‘tiger’s milk’, however, that unites each of the flavours and tantalises our taste buds. Similarly, Yana ceviche also harbours a fierce tiger’s milk to accompany slivers of Yellowfin tuna, quinoa and pickled pineapple that lends a slight Hawaiian facet to the dish.

Causa de Arguedas is possibly the most baffling menu item, not only here – but throughout all of East London at the moment. Three crags of cold, wasabi-green mashed potato are served with minute dice of tuna tartare. The taste is fine, but texturally It’s exactly as unpleasant as you may expect. Far better is the Aguadito de Mariscos – a pot of coriander rice embellished with seafood and a drizzle of prawn bisque. Here, king prawns, squid and mussels are properly prepared, cleaned and cooked. The flavour of coriander rice works surprisingly well with the squid and mussels, while the prawn bisque alone is rife with amiable flavour. At home, it’s the sort of liquid I’d mop up with an injurious amount of thick, crusty bread.

From the menu’s ‘grill’ heading, a tentacle of octopus is also cooked correctly, served atop a puree of butterbean and lucuma (a sweet fruit popular in Peru) that looks similar to leftover pomace from wine production. More sweetness comes with the cane sugar chancaca sauce, though it’s gently spiced. The sweet-spiciness is enjoyable with the octopus, though the crowning salsa criolla imposes a plague of acerbically overpowering raw onion. Alongside the Aguadito de Mariscos, perfectly pink lamb rump is refreshing with ribbons of cucumber and a salsa of green pea, mint, parsley and coriander. Elsewhere, peanut vinaigrette is sating yet subtle, though anchovy salt, promised by the menu, is alas indistinguishable.

To finish, doughnuts of fried pumpkin and sweet potato are dense, yet quite delicious. A Kilner jar of avocado and strawberry, on the other hand, is also unexpectedly delectable. An uncommon combination, sweet strawberry preserve is suitably contrasted by avocado cream – like a Latin American Eton Mess without the meringue – and topped with popped, slightly sweetened amaranth seeds. Although dinner at Andina is perhaps less exciting than it was on opening, four years ago, the Peruvian food is mostly clean, sating and reasonably priced. Dinner here is also a fine introduction to the Latin American food that’s still so overwhelmingly popular in 2017.

Andina can be found at 1 Redchurch Street, London, E2 7DJ. ‘Andina: The Heart of Peruvian Food’ by Martin Morales is available now from amazon.co.uk, Quadrille, RRP £27.