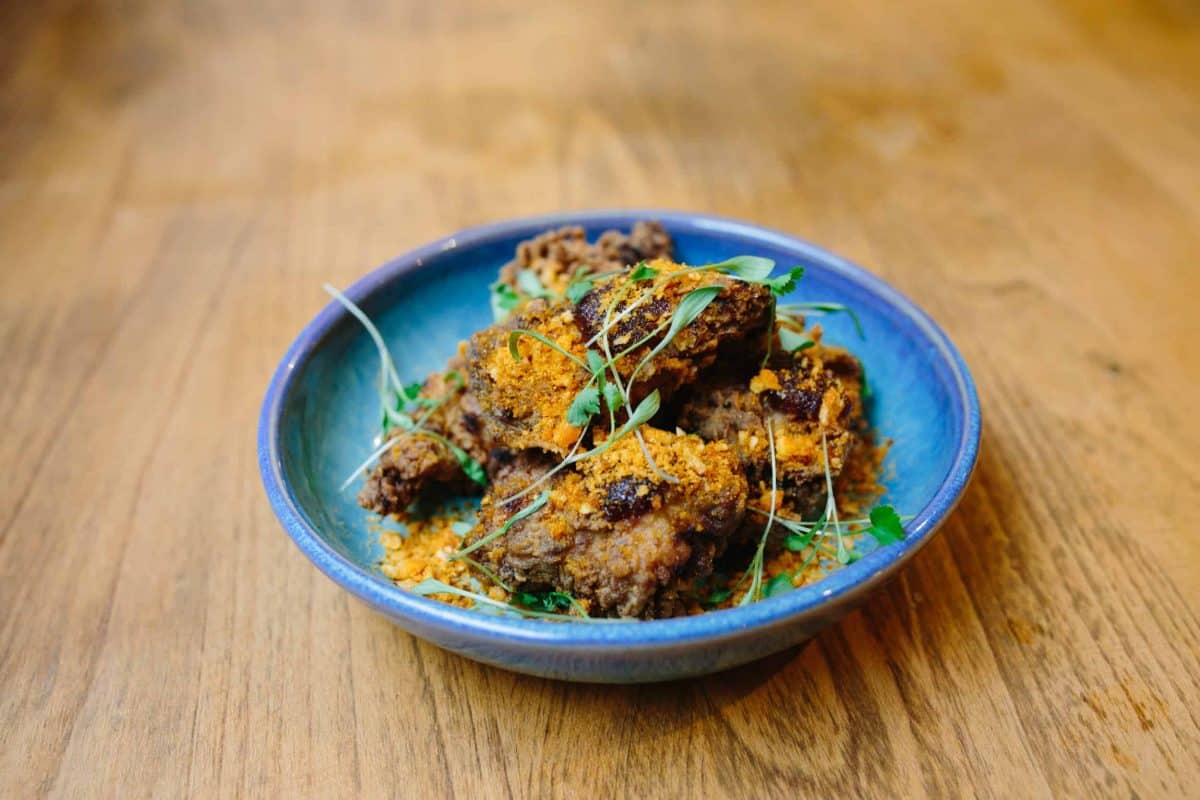 12:51 is an unusual name for a restaurant, the latest from Kent-born chef James Cochran. After parting company with the original backers of James Cochran EC3 in the city, the chef lost the right to use his own name for branding due to an unusual trademarking issue. While heading-up the kitchen at the Bevis Marks restaurant, the company had trademarked the chef’s name as a vehicle to license a selection of recipes. Unable to use his own name for his Upper Street restaurant, Cochran’s 12:51 is actually named after the first single from The Strokes’ 2003 sophomore album.

Inside, the restaurant is split into two long dining rooms across two levels, with space for 48 covers. The space’s décor is relatively minimalistic, allowing the food to take centre stage. Service, on the other hand, is friendly, with staff keen to discuss the menu. Having trained at restaurants such as two-Michelin-starred The Ledbury and the Harwood Arms, James Cochran celebrates his Scottish and Caribbean heritage at 12:51, utilising as much Kentish produce as possible. Naturally. Particular attention is paid to ingredients here, with even the drinks menu championing interesting produce. The bar’s Negroni, for instance, features house-made vermouth infused with sweet cicely from Kent.

As for the food menu, dishes are intended to be shared, split into “snacks” and larger “plates”, with around five dishes recommended to be shared between two. A recent dinner began with a small dish of the chef’s now famous buttermilk jerk chicken, featuring boned chicken portions well-brined and cloaked with craggy batter, vaunting a fair knock of spice, amplified by a blob of Scotch Bonnet jam on the side. Goat kromeski, on the other hand, was a more-ish nugget of slow-cooked goat meat, ensnared by golden bread crumbs, lifted by a suggestion of pineapple chutney which lent an unexpectedly enjoyable nuance to the dish, following-through with a whack of refreshing sweetness, accompanied by more of that Scotch Bonnet jam.

Next to arrive at the table (dishes are brought out as soon as they’re ready, served in no particular order), Harrietsham leeks were submerged under a puddle of whipped Montgomery cheddar, crowned with a generous blizzard of black truffle shavings and joined by a wedge of sourdough, also showered with truffle. A gloriously insalubrious delight. A dish of roasted Cornish scallop was more refined in its execution but no less flavoursome, harbouring a scallop the size of a small child’s fist atop a half-shell, plus ribbons of fennel, leek puree and potato “risotto”: tiny dice of potato cooked in stock, somewhat less enjoyable than traditional risotto yet still impressive. An example of the chef’s accomplished cooking, rampant with fine dining technique but showcasing bold flavours more synonymous with homely dishes.

A tranche of hake starred in another example – the meaty fish accompanied by a small blob of roasted cauliflower puree, served on a bed of lime pickled and crusted with a heavy-handed smattering of dukkah. Perhaps the most refined of the dishes ordered, a breast of wood pigeon was poached and roasted, perfectly pink and served with a wedge of charred Treviso lettuce, quince puree and some toasted grains for amplified texture. Even better, however, was a dish of slow-braised lamb neck with a complex balance of flavours structured like the Empire State Building. A bed of Jerusalem artichoke flecked with winter savory was topped with the lamb, cooked to the point of submission, sharing the plate with a dollop of smoked crème fraiche, Jerusalem artichoke crisps and a lamb sauce deeper than the ocean. An absolute triumph of wintery, comfort food flavours produced from a parade of humble ingredients.

To finish, whipped cheesecake was a modern take on the classic, capped with a crumb embellished with almonds, while strands of tart rhubarb sliced through the cheese’s richness and sweetness of the convoying white chocolate. Another hit. Just like the song, 12:51 is an impressive follow-up to a well-received debut.

Finale of Harry & Meghan series to air with huge claims