An American classic, by way of Europe, this cheese burger recipe is perfect for cooking on the barbecue for 4th of July celebrations, or any other time of year. 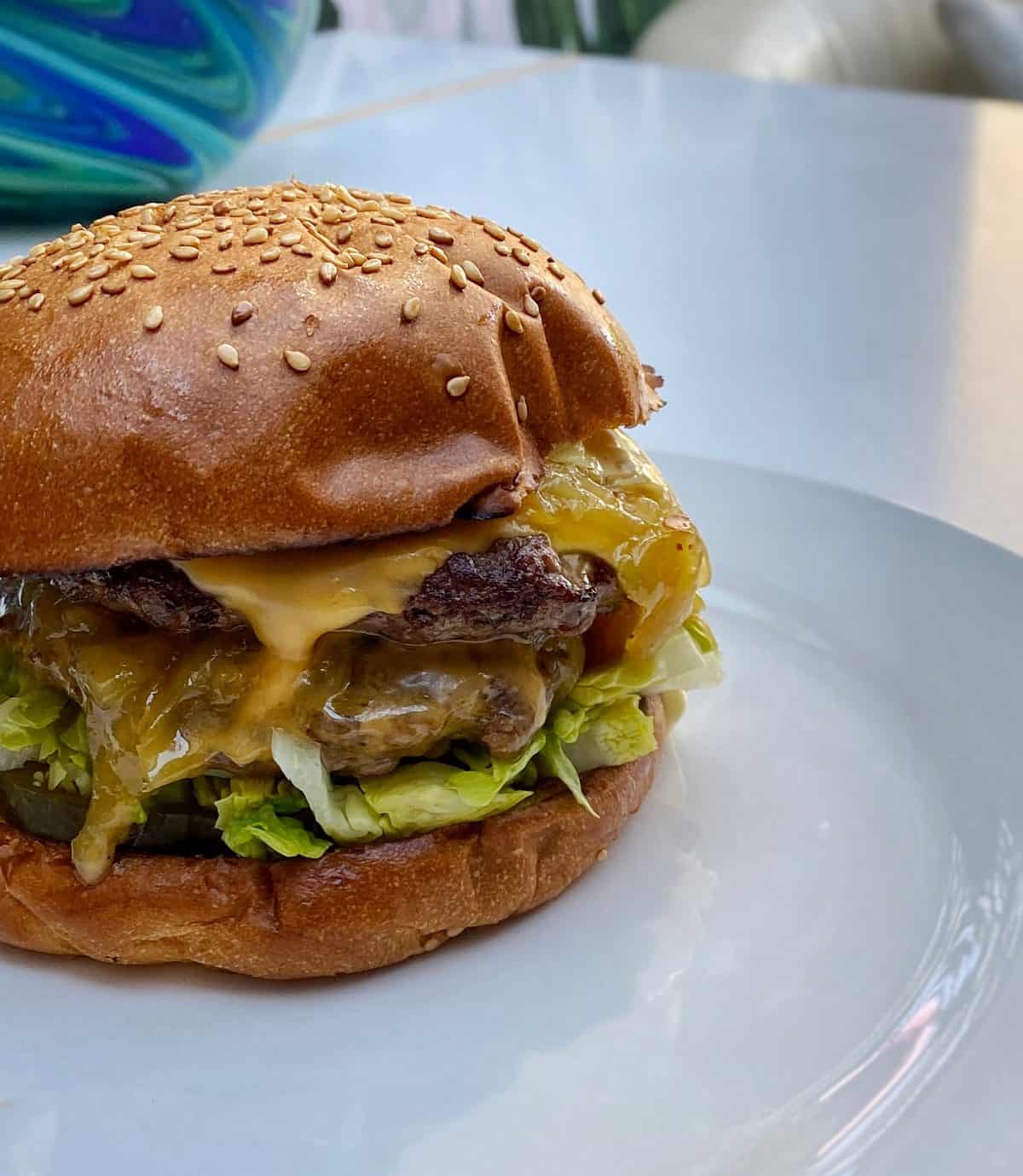 With a long, colourful history, burgers have become one of the world’s favourite fast foods. With more than 50 billion burgers consumed annually, the burger is commonly associated with the United States of America, having become a staple of backyard 4th of July barbecues. Minced beef has been enjoyed for centuries, however, with most historical sources linking the first burger to 13th Century Mongol horsemen who would stash raw beef under their saddles. After the ride, the pounded meat had become tender enough for the cavalry to eat raw; later taken to Russia and enjoyed as steak tartare. Once global trade had picked up, seafarers transported the dish to the port city of Hamburg, Germany, where heat was added to the equation, with the dish commonly referred to as a “Hamburg steak”.

Immigrants fleeing Europe for America eventually introduced the Hamburg steak to the United States, with New York restaurant Delmonico’s considered the first establishment to feature the dish on its menu during the 1830s. An all-American innovation eventually transformed the hamburger into the sandwich we know and love today, yet the exact origins remain murky. Although loose variations had been served previously, Louis’ Lunch in New Haven is officially accredited by the Library of Congress as selling the first hamburger in the United States during 1900. White Castle, the world’s first burger chain, followed in 1921, succeeded by the first branch of McDonald’s Bar-B-Que.

Over the past 80 years, McDonald’s has played a significant role in revolutionising Americanised fast food, and has even inspired restaurant chefs. Since its launch at the end of the ‘60s, the Big Mac remains the world’s most iconic example – further introducing the world to the burger while paving the way for the launch of countless high-end burger chains.

Today, burger making is still taken very seriously, with the subject of making the perfect burger contentious, given the many possible ingredient variations, cooking methods, toppings, and serving suggestions. This ultimate burger recipe includes two thin patties, which can be cooked indoors or on the barbecue. Approximately 3-5 mm in thickness, the patties are made with a blend of minced sirloin, brisket, and beef short rib. General minced beef is fine if you don’t have access to a butcher, mincer, or butcher who’ll mince the meat for you, but it’s worth investing in the best quality beef you can afford as it’s prepared with just a little salt and pepper to really accentuate the quality of the beef. Onions, breadcrumbs, or herbs are completely unnecessary when good-quality meat is used.

This burger recipe also relies on a controversial brioche bun. Hate them or love them, brioche buns are well suited to lavish beef burgers, especially when firm enough to avoid disintegrating under the weight of the patties and their toppings. Sesame seeds are an added bonus if you’ve got the time and patience to make your own brioche or access to a good bakery. As for the toppings, I like to keep things simple and limited to American-style cheese, shredded Iceberg lettuce, dill pickle slices, and onion. This recipe favours either caramelised onions or a thin slice of raw onion, placed directly under the bottom beef patty. When it comes to sauce, I like a mix of ketchup and American mustard, or burger sauce, but that element should be entirely dependent on personal preference. 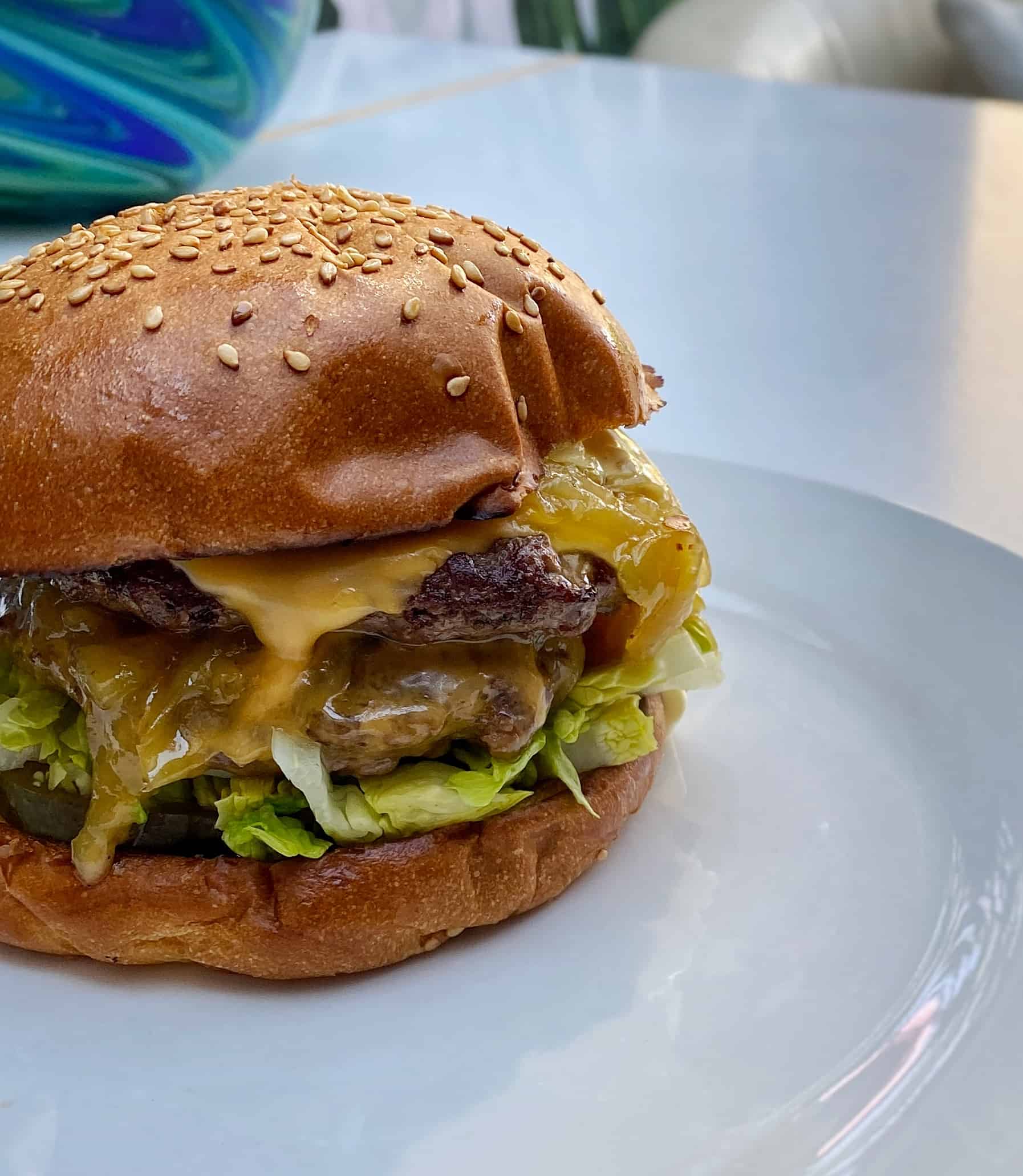 General minced beef is fine if you don’t have access to a butcher, mincer, or butcher who’ll mince the meat for you, but it’s worth investing in the best quality beef you can afford as it’s prepared with just a little salt and pepper to really accentuate the quality of the beef. Onions, breadcrumbs, or herbs are completely unnecessary when good-quality meat is used.
Tried this recipe?Let us know how it was!