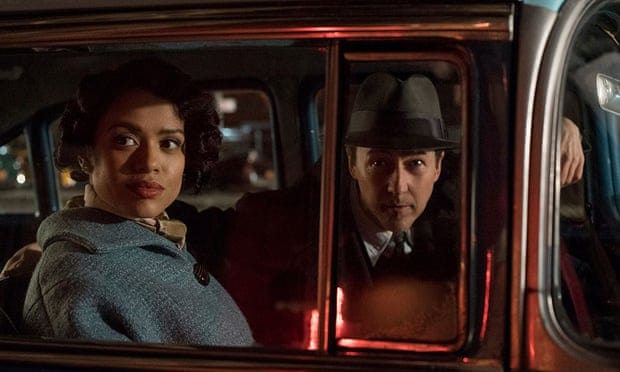 Motherless Brooklyn brings us the story of private detective, Lionel Essrog, AKA “Brooklyn”,   that afflicted with Tourette’s syndrome, having suffered abuse as a child and being often called “Freakshow”. He seems to be one of the last tender-hearted people in 50s New York, where corruption, segregation, gangsters, violence and established power ruled the city .

Lionel is played by Edward Norton, who as well as playing the lead, has adapted the screenplay from Jonathan Lethem’s book and also directs.

Lionel describes himself as someone that has problems with his brain,  as someone that lives with “an anarchist” who happens to be very detailed oriented and that cause him physical twitches and tics that are often accompanied by bursts  of wordplay that are nothing more than poetic. Although being called “Freakshow” due to his condition, Lionel is nothing more than a protector for the vulnerable souls that come his way and  sometimes mined for morals. Lionel is very thankful for Frank (played by Bruce Willis) who took him under his wing and helped him to learn how to use his gifts and it is Frank’s murder that moves the plot line.

Edward Norton is absolutely amazing as Lionel. Being very protective of his character, he steals every scene he is in and makes  the audience not only relate to Lionel, but also empathetic to his character and what he has gone through.

With a legendary cast such  as Alec Baldwin, Willem Dafoe, Bruce Willis and the rising star Gugu Mbatha-Raw, Edward Norton brings us to a 50s New York city that truly makes us feel that we are being transported in time, both by the cinematography, which is delightful and visually very true to the period,  by the music which is mostly Jazz and you feel like really are being  in those blocks of NY city and finally by the darkness of the plot and the way the story line leads us across  the film, keeping us gripped to our chairs and wanting to finally know what if going to happen, and  what really happened  to Frank , always keeping the  ability to leave the final twist to the very last minute.

Maybe the readers of the book will find Norton’s adaptation a bit unusual, yet ultimately it is hard to doubt that taste in collaborators and themes explored. The actors may glide in and out of moments that are by turns intimate, absurd or frightening, yet this feels less an inconsistency as part of the beauty of great acting and great story telling.