Ten thousand calories, 18 inches and the world’s hottest chillies. That’s what makes up the World’s hottest burger, and Rob Radcliffe of Cambridge has just demolished it in under half an hour, before polishing off 1lb of chips topped with red hot chilli con carne and the Carolina reaper. The Rocker’s steakhouse challenge burger contains four […] 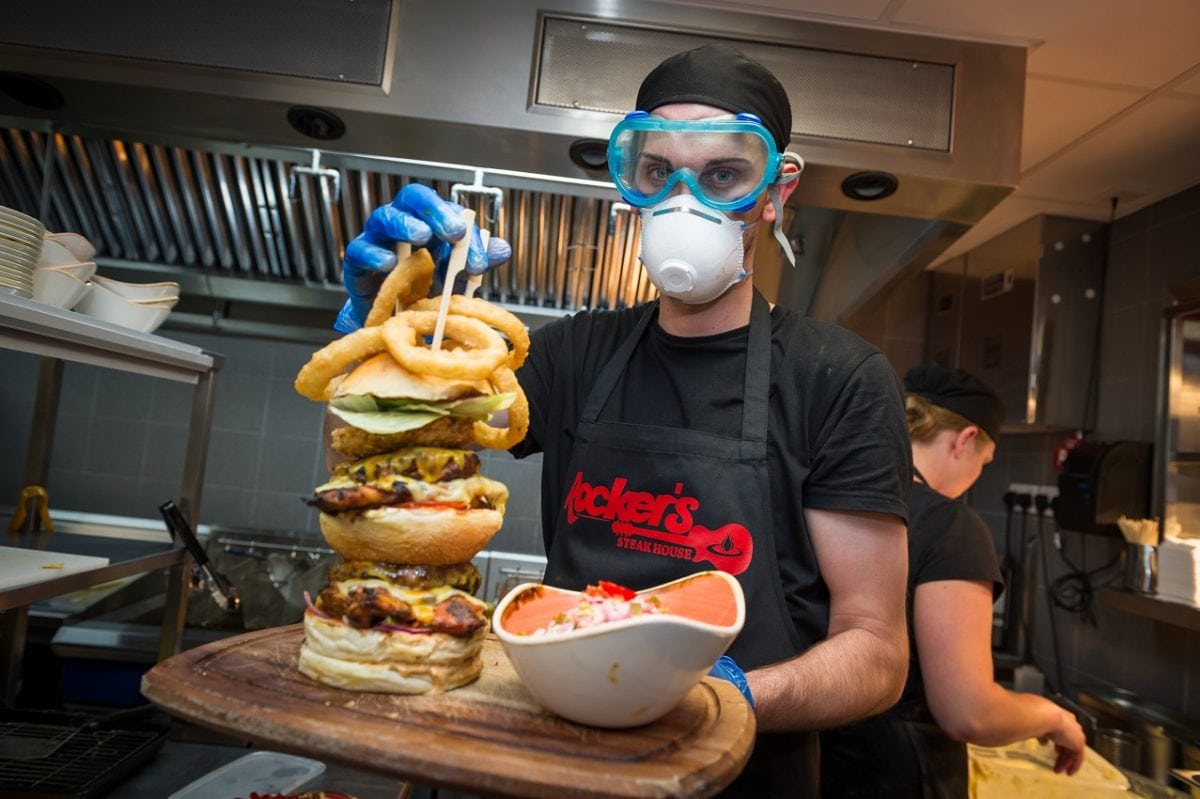 Ten thousand calories, 18 inches and the world’s hottest chillies. That’s what makes up the World’s hottest burger, and Rob Radcliffe of Cambridge has just demolished it in under half an hour, before polishing off 1lb of chips topped with red hot chilli con carne and the Carolina reaper.

As well as the burger, challengers have to eat a pound of chips topped with chilli cheese, a side of coleslaw and a bottomless soft drink. The feast comes with a charge of £34.95 – but it’s free if completed within a 30 minute time limit, meaning Rob saved a few bob by hoovering it up in 29 minutes 36 seconds.

Rob, co-owner of Cambridge-based Tom Removals, had to sign a waiver saying he took it on at his own risk before starting the challenge. This is because the super hot chillies have caused people to have temporary digestive problems and even be sick in the past. Thankfully apart from his numb mouth and tummy ache Rob waddled off from the challenge unharmed.

But he revealed the moment he saw the burger his stomach literally sank.

“It wasn’t easy, put it that way”, Rob said post-challenge. “I think my stomach stretched to twice its normal size to accommodate all the food.

“I normally love hot food but this wasn’t pleasant. My mouth went numb after about five minutes but I just kept powering through and somehow managed to finish it.

“When I swallowed the final bite I felt euphoric and very sick at the same time.” The former bar manager said: “Beforehand I thought ‘how hard can it be’. But when they brought it in it finally dawned on me how difficult it was going to be.

“But then I thought ‘what have I got to lose?’ I gave it my best shot and just attacked the second they set the 30 minute timer off.

“I ate the chillies first to get them out the way which probably wasn’t the best idea because my mouth was then completely numb.

“Then I ate the burger, buns, salad and finally the chilli chips. It wasn’t a pleasant experience but I’ve got a strange sort of satisfaction knowing that I’m the first person to do it.

“I’m hoping it lays down the gauntlet to others to follow in my footsteps. Just beware that it’s not as easy as you might think.”

The challenge was created by restaurant owners Kuong Chu and George Bhangoo, who were inspired by US cult cooking show Man V. Food.