It’s no secret that many of the world’s steakhouses are unashamedly masculine. Within such man caves of brawn and brew, men in their most pre-evolved state are an almost guaranteed fixture, coarsely yamming lavish cattle (nearly always Wagyu) washed down with the most expensive bottle of Merlot justifiable on the company credit card. It’s an […] 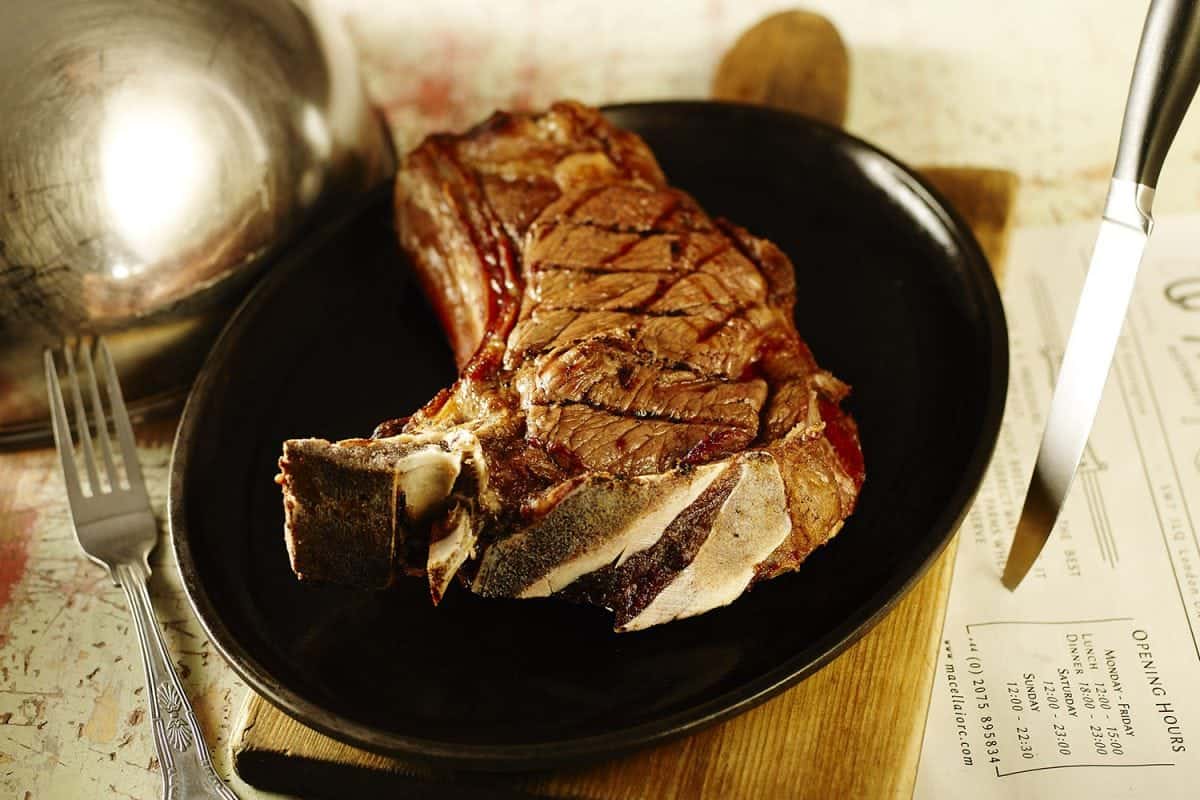 It’s no secret that many of the world’s steakhouses are unashamedly masculine. Within such man caves of brawn and brew, men in their most pre-evolved state are an almost guaranteed fixture, coarsely yamming lavish cattle (nearly always Wagyu) washed down with the most expensive bottle of Merlot justifiable on the company credit card. It’s an old stereotype, but this tired notion of toxic masculinity is still showing no sign of wavering.

At Macellaio RC, with four restaurants across London, the butchery concept is so on the nose, I half expect to forgo the wine list and order a shot of undiluted testosterone to accompany dinner. The demi-chain’s newest restaurant, in Battersea, even serves actual testicles. A delicacy so seldom seen on the menus of London restaurants, the ox testicles are so intriguing they must be ordered – if only to report back with a fun, vomitus anecdote. “Tell me more about the testicles,” I ask our waiter, to which he explains the dish’s processes with fervent solemnity; as if I’d ordered a crisp white wine to accompany my steak.

Pan-fried and sliced, the testicles are sloppily presented in a bowl with a slick of rich gravy, accoutred with lardons of heavily smoked bacon. Unsurprisingly, these jewels of beef have a rich offal taste, oddly similar to lamb’s kidneys, but curiously less uric. The firm texture is harrowing, but the taste is remarkable enough to momentarily forget the particular organs I’m guzzling without abandon. After all, if we really must kill an animal in the name of nourishment; it’s only fair to devour all of its edible matter – especially when even the most grim-sounding cuts generally taste so inoffensive. 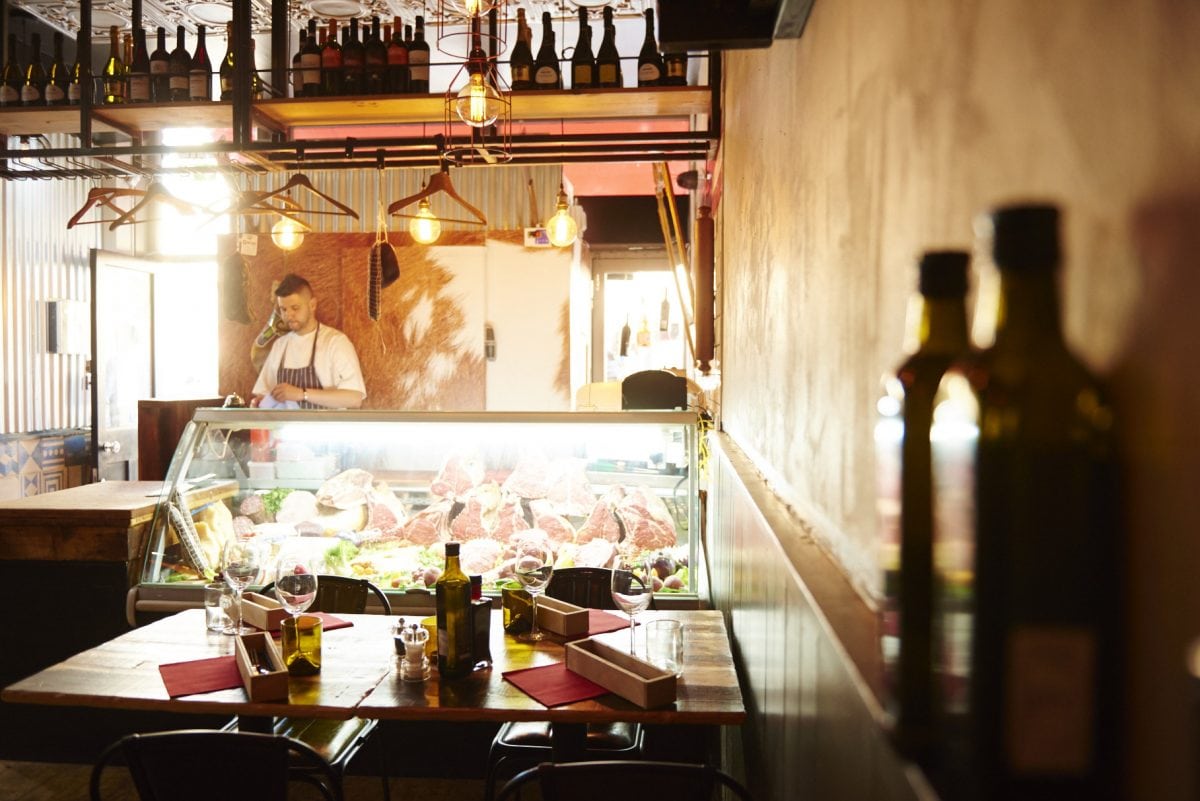 Male genitalia aside, Macellaio RC isn’t quite as frightfully macho as you may expect. Inside, the quaint, devoutly Italian ambience is quite pleasant. Passing the façade window festooned with large cuts of beef hanging to dry-age, we’re greeted by an on-site butcher who hacks portions from a vast loin with a cleaver (a saw would be more accurate, but less dramatically theatrical), and a receptionist who takes almost ten minutes to find the booking – turning other customers away while we wait, insisting the restaurant is fully booked. Inside, the space is emptier than suggested, but it’s instantly clear the crowd is refreshingly diverse. Most tables are occupied by couples or young families, eating copious amounts of beef by candlelight. I’m with my Dad; the time-honoured Master Butcher.

At Macellaio RC, it’s clear the kitchen (and butchery) take great pride in the produce served, allowing ingredients to do most of the talking. Dishes such as pork collar, whole pigeon or various pastas are available, but the exclusively Italian beef is the real reason to visit. All of Macellaio RC’s beef is from Fassona cattle, native to Piedmont in north-west Italy. Classic steak tartare (opposed to ‘L’imperiale’ at £35) is stridently prepared on the butcher’s block, finely hewn but not the point of edentulous mulch, mixed with a fair splash of Tabasco and mustard then embellished with gherkins and raw shallots. I’m still baffled by the decision to serve the tartare on a slate, balanced on a well-used chopping board. The tartare is fine, but the steak is the meal’s chief talking point.

Rump steak with numerous elaborations are available, joined by Costata rib of beef, or Fiorentina T-bone. Compared to the T-bone on offer at Hawksmoor (£8.25 per 100 grams) or extortionate £10.57 at Smith & Wollensky, Macellaio’s outstanding Fassona beef is humbly priced at just £6.40 per 100 grams. A breed of cattle used for centuries for dairy and labour, it’s only more recent that Fassona beef has become popular. Female cows are typically used as the testosterone in males can make the steaks too tough and strong. These white cows are grass-fed and roam uphill during the summer when there’s not enough grass in the foothills, leading to huge, exercised muscles. Naturally, the final product is tougher than pricey Wagyu or corn-fed USDA beef, but the taste is, arguably, far superior. Traditionally, the cattle are also given particularly good lives, raised on small farms, which is reflected in the taste. 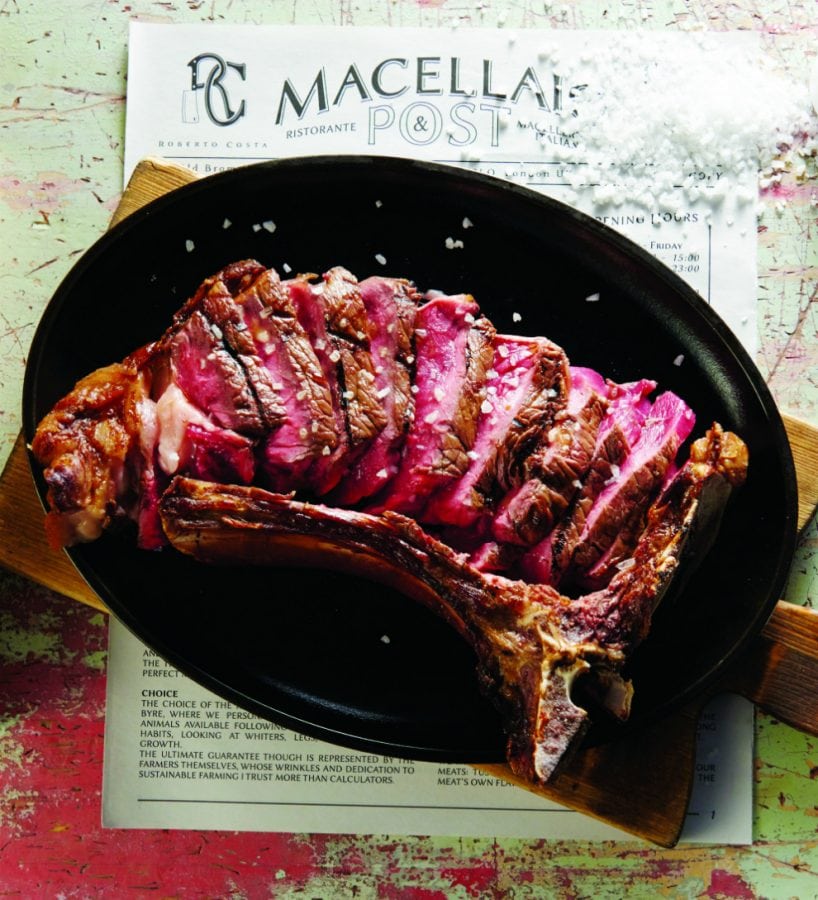 Fassona is generally regarded best served raw, but that’s mainly due to so many chefs cooking steak carelessly. At many London restaurants, steak is an additional after-thought reserved for the unadventurous. At Macellaio RC, steak is everything. The Fiorentina T-bone (cut higher, to deliver a generous wedge of fillet) has been aged for at least six weeks, which imparts exceptional flavour and compensates for the relative lack of fat. Presented at the table, on its way from butcher to kitchen, the steak is cooked quickly; heavily charred on the outside, but rare in the middle. Perfectly seasoned (after cooking, to prevent drying) the beef has a sweet, clean taste with a long aftertaste, while the small amount of remaining fat has a deliciously insalubrious, eggy flavour.

Simply, the steak is exceptional. We both agree it’s one of the best we’ve collectively tasted – rivalling even the most prestigious Kobe, Wagyu, Galician, or even outstanding British alternatives. The service is somewhat ramshackle, but friendly enough, yet doesn’t detract from the quality of the food served. Dinner at Macellaio RC’s latest outpost proves, not only, that steakhouses needn’t be frightfully macho – but also present a convincing case in favour of Italian beef being some of the globe’s absolute finest.