The move could hamper Tory efforts to win a majority, as Mr Farage risks splitting the pro-Brexit vote between his party and the Conservatives. 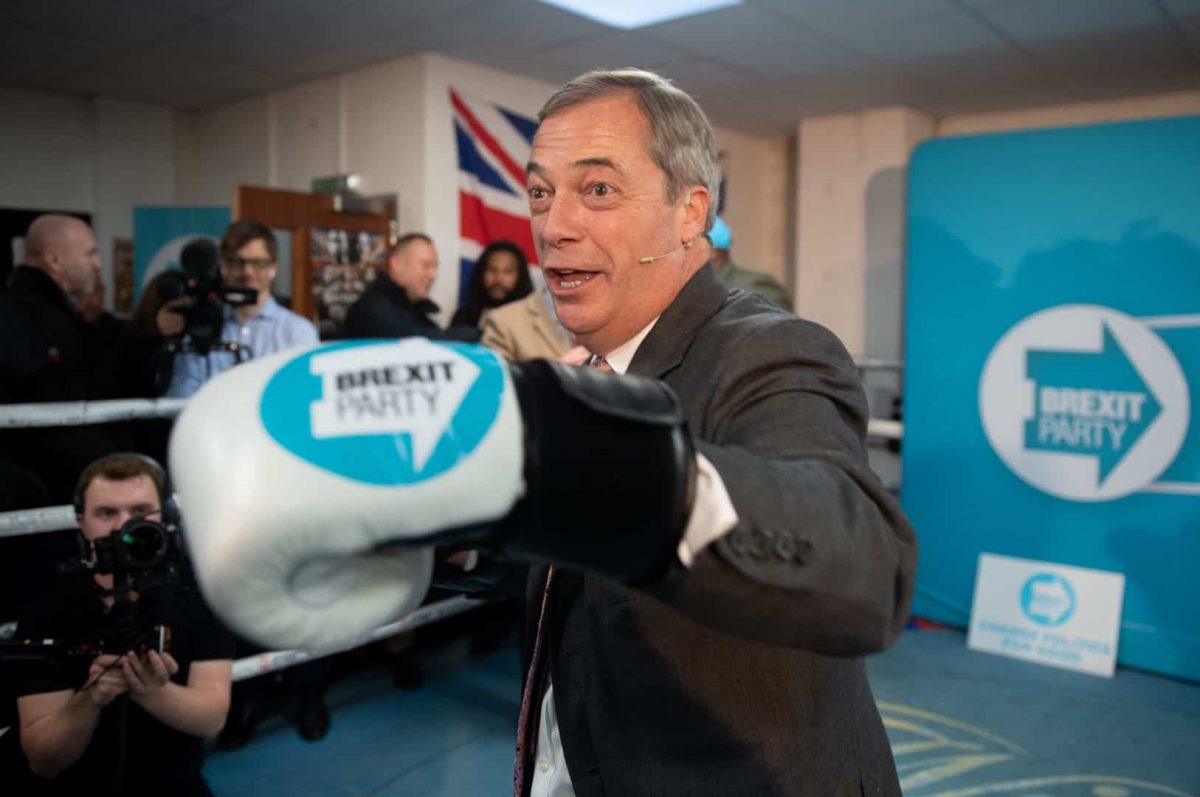 Nigel Farage has refused to stand down candidates in Labour marginal seats despite mounting pressure from Conservatives who believe he could risk another hung parliament.

The Brexit Party leader said he would field candidates in every Labour-held seat – having previously climbed down from his threat to try to fight all seats at the December 12 poll.

The move could hamper Tory efforts to win a majority, as Mr Farage risks splitting the pro-Brexit vote between his party and the Conservatives – potentially opening the way to Labour.

Speaking at a boxing club in Ilford, Essex, he said: “In parts of east London like this, there are constituencies that voted by 69%, by 70%, to leave the European Union…

“We’re going to stand against every single one of them.”

Mr Farage said that only by Brexit Party MPs entering the Commons could Boris Johnson be held to account on his Brexit promises.

The former justice secretary suggested Tory supporters opposed to no deal should consider “lending” their votes to the Liberal Democrats on December 12.

Mr Gauke, who had the Tory whip withdrawn by Mr Johnson after rebelling over Brexit, confirmed he would now be standing as an independent in South West Hertfordshire – the seat he has held since 2005.

He said he feared if Mr Johnson was returned with an overall majority it would lead to Britain leaving the EU at the end of the transition period at the end of 2020 on World Trade Organisation (WTO) terms.

“A Conservative majority after the next General Election will take us in the direction of a very hard Brexit,” he told BBC Radio 4’s Today programme.

“In all likelihood, at the end of 2020 we will leave the implementation period without a deal with the EU, on WTO terms, in effect on no-deal terms, that I believe would be disastrous for the prosperity of this country – whole sectors would become unviable.”

“It’s a hypothesis which has been put by people who have consistently… sought to raise bogies and to make people’s flesh creep,” he told the Today programme.

Mr Gove, who is in charge of the Government’s no-deal preparations, said a working majority for the Conservatives in the new parliament is the only way to end the “paralysis” over Brexit.

“Everyone knows that the Prime Minister wants a deal and the Government is determined to secure one,” he said.

Elsewhere on the campaign trail, Labour pledged to outspend the Tories by investing an additional £26 billion in the NHS to rebuild “crumbling” hospitals and improve patient care if the party wins the General Election.

Shadow chancellor John McDonnell said Labour would take the total Department of Health and Social Care budget to £178 billion in 2023-24.

“On each of these fronts, the Tories have offered weak commitments, reflecting their hostility to free public services and the need for us to care for each other,” he told a Labour campaign event in London.