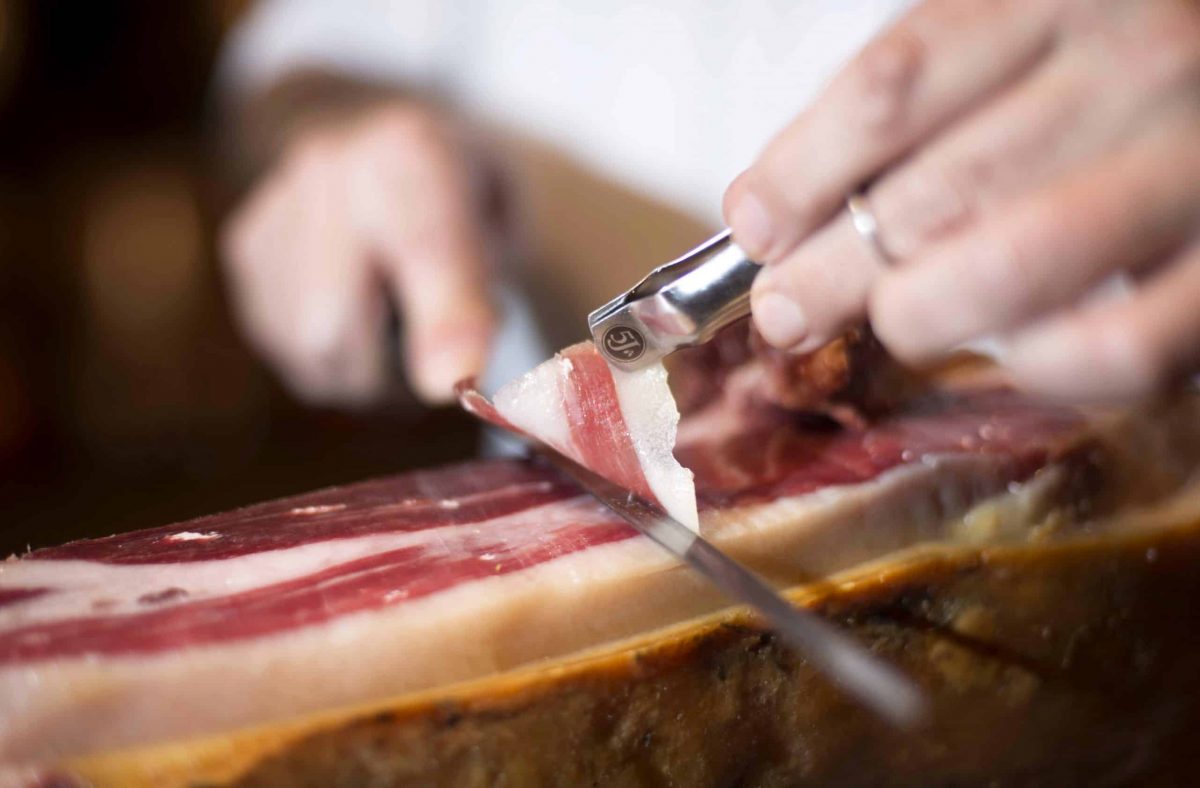 Considered by some to be the best ham in the world, Cinco Jotas produces acorn-fed 100 per cent Ibérico ham.

Established in 1879, Cinco Jotas uses purebred Ibérico pigs, raised free range in the woodlands of Jabugo, Southwest Spain. Declared a Biosphere Reserve by UNESCO, the Jabugo natural parks offer abundant rains, a mild climate, and Atlantic breezes to create an ideal location to raise pigs for this product. A portion of all proceeds from Cinco Jotas’ ham products goes towards preserving these Spanish meadows (dehesas) by way of the University of Huelva. Distinguished with the highest Iberian Quality Standard grade achievable, as evidenced by the five-star black label, Cinco Jotas acorn-fed 100 per cent Ibérico ham is, unsurprisingly, considered one of Spain’s National Treasures.

Served to guests at the 2019 Academy Awards Governors Ball, by chef Wolfgang Puck, and sold in over 40 countries, Cinco Jotas acorn-fed 100% Ibérico ham is arguably the best-known Spanish ham in the world. In London, the ham is served in restaurants such as Sabor, El Pirata, and all of Brand Ambassador José Pizarro’s restaurants. Moreover, it’s served in an additional 47 Michelin-starred restaurants around the world and is an official partner of The World’s 50 Best Restaurants.

The family-owned business relies on a team of veterinarians and experts in animal husbandry to source and care for the 100 per cent Ibérico pigs, fed on acorns, roots, and herbs. The Cinco Jotas 5J has matchless provenance, produced from the hind legs of black Iberian pigs. The highest grade of Jamón Ibérico (Jamón Ibérico de Bellota) features pigs fed entirely on acorns towards the end of their lives. Transferring its unique properties to the ham, the fruit is comprised of carbohydrates and oleic acids which, in turn, contribute to a relatively healthy nature which helps to regulate humans’ metabolism and has been linked with reducing LDL cholesterol and preventing cardiovascular disease.

Once cured, the Jamón de Bellota is sliced by some of the most experienced master carvers in the world, with every step specifically designed to ensure that the maximum flavour and aroma is delivered. Pure Jamón Ibérico de Bellota 5J differs from the rest of the global produce, based on unique texture and incomparable flavour. Delicate and slightly salty, with nuances of sweetness, it’s complete with consistent flecks of intramuscular marbling, with high fat content lending a rich, outstanding taste. The matchless flavour is simply exceptional, best enjoyed on its own or used in a selection of recipes (see below).

The ‘Limited Edition Grand Tour Cinco Jotas Trunk’ (RRP £4,000) features a reusable case, from a limited run of 40, with ham specially selected by the Cinco Jotas Cellar Master, including a 9kg bone-in acorn-fed 100 per cent Ibérico ham, a Zwilling carving kit, a Lodivi folding ham stand, Cinco Jotas apron, and a set of six leather tags with which to personalise the trunk.

Cinco Jotas is available online from the brand’s website and in store at Harrods and other fine food retailers. The Christmas collection will also be available online as of 1st November, and from selected gourmet specialists.

For the garlic salt

For the potatoes: Wash the potatoes and cut into slices of quarters or eighths, depending on size. Cover potatoes with oil in a saucepan. Heat under low flame (130C) until they are fully cooked. Set aside.

For the garlic salt: Dehydrate thin slices of garlic in the oven. Once dried, crushed garlic and parsley to a fine powder and set aside.

Fry previously-cooked potatoes, season with garlic salt and serve with slices of Cinco Jotas Iberico ham and the egg yolk

For the eggs: Fill a saucepan with water, add salt and vinegar, and bring to a boil. Once boiling, stir and place in the eggs, one by one, leaving each in for 1.5 minutes. Remove the eggs from the water and dry as much as possible.

For the tempura: Place all the ingredients in a bowl and create a smooth, consistent batter. Store at cold temperature.

Place the sliced Cinco Jotas Iberian ham on the plate and finish off with eggs fried in the tempura batter.

Place the tomatoes and garlic on a baking sheet with salt and a little oil. Roast for 40 minutes at 190C.

Once roasted, remove the garlic and tomato and mash together with the other ingredients. Strain and cool.

Place the cold soup with Cinco Jotas Iberian ham dice into a bowl with the chopped boiled egg.