Strength: 5.8% Brewed: Kentish Town, London Currently celebrating their 10th anniversary, Camden Town Brewery was founded in the basement of The Horseshoe pub in Hampstead by Jasper Cuppaidge. The current brewery is located in Kentish Town, though a brand new facility will open this summer, a little further north-east in Enfield. Quite an achievement, the […] 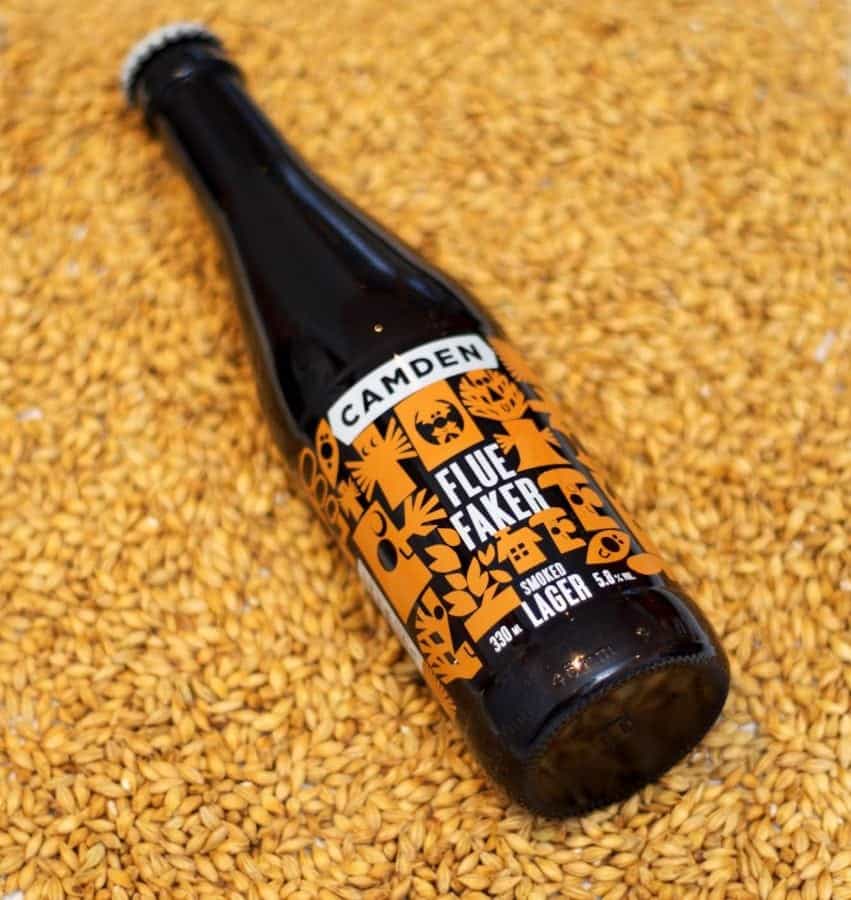 Currently celebrating their 10th anniversary, Camden Town Brewery was founded in the basement of The Horseshoe pub in Hampstead by Jasper Cuppaidge. The current brewery is located in Kentish Town, though a brand new facility will open this summer, a little further north-east in Enfield. Quite an achievement, the new Enfield brewery is set to be the largest brewery to be built in London in over 30 years. With a core range of seven beers, most popular of which is possibly the Camden Hells lager, the brewery also launches a number of limited edition seasonal beers each year. The first single batch seasonal beer of 2017, ‘Flue Faker’ smoked lager, coincides with the launch of the newly refurbished Brewery Bar in Camden, hosting an outdoor pop-up kitchen with a Flue Faker-inspired menu created by guest chef Neil Rankin.

Brewed as a take on a classic Bamberg Rauchbier, Camden Town Brewery’s Flue Faker is made using a beechwood-smoked pilsner malt, which intends to give the lager a subtle and smoky richness. It has to be said that, although marketed as a ‘smoked’ beer, the smokiness here is not overwhelming, but cleverly evokes flavours of smoked meats and fish, reminiscent of barbecues. When poured, the beer is amber with a foaming white head and visible carbonation. Strangely enough, the most prominent initial aromas are of on-trend smoked eel. Elsewhere, further barbecue notes of beechwood are joined by some slight caramel sweetness and crusty bread yeast notes. All of these continue onto the palate, with a pronounced malt smokiness that melds into a somewhat sweet note, complete with a pleasant dryness. The finish, however, has a lingering smokiness and alcohol potency (perhaps unsurprisingly with high ABV) not too dissimilar to a heavily-peated Islay whisky.

An intriguing brew, Camden Town Brewery’s Flue Faker is a Marmite-like lager: you’ll simply love it or hate it. Nonetheless, it’s difficult to criticise the boundary-pushing, adventurous quality that’s showcased with the final product. What’s more, the latest offering from one of London’s biggest craft beer success stories looks set to become a smash hit through the coming barbecue season.

Flue Faker is available from the Brewery Bar both in draft and to take away from the new walk-in cold room in bottles, cans, growlers, crowlers or by the case. The beer is also available on tap in Camden Town Brewery’s pubs and from a number of specialist beer retailers. Further information can be found at camdentownbrewery.com.