Four years have passed since the Shard was completed, and I’m still unable to understand why visits to the 72nd floor viewing gallery are so popular. Given the choice, why would anybody choose to pay £25.95 for the pleasure? Especially when that particular cost could, instead, buy a round of drinks (almost) within one of […] 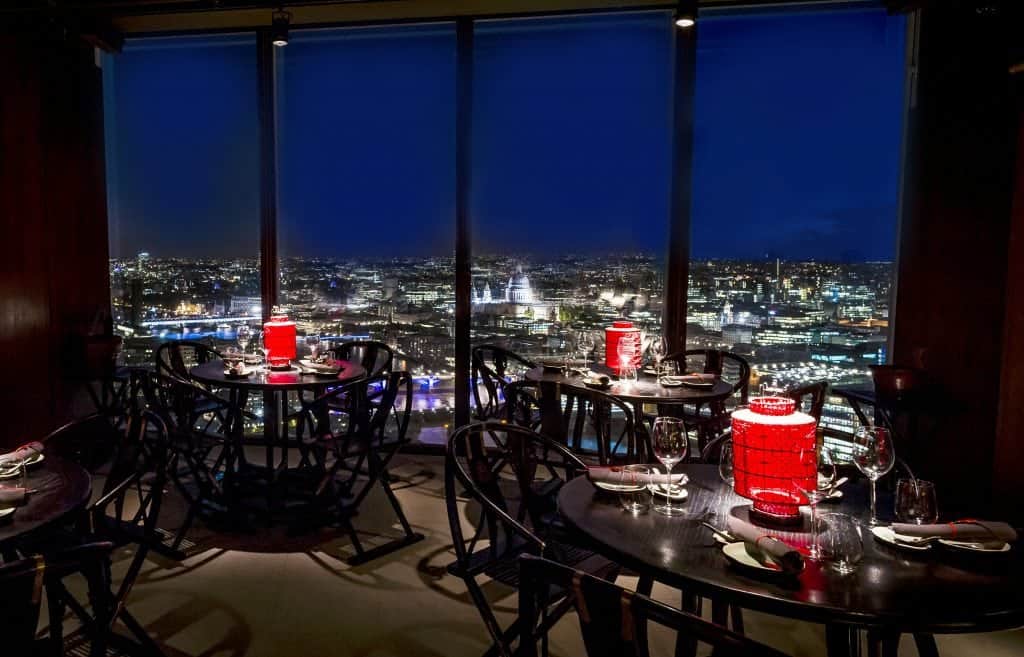 Four years have passed since the Shard was completed, and I’m still unable to understand why visits to the 72nd floor viewing gallery are so popular. Given the choice, why would anybody choose to pay £25.95 for the pleasure? Especially when that particular cost could, instead, buy a round of drinks (almost) within one of the restaurant bars? The restaurants are perched just half-way up the tower, yet the views are almost equally impressive – especially when seated window-side, with a particularly stunning view of the skyscrapers just across the Thames. Located on the 33rd floor, Hutong is the building’s resident high-end Chinese restaurant, with a prominent focus on Northern Chinese and Sichuan cuisine.

On the other side of the reception desk, a vast bar area is accentuated by floor-to-ceiling windows and quintessentially Chinese partitions that are intricately carved from dark wood. The bar also offers a drinks menu consisting of some remarkably innovative new cocktails created by new Bar Manager, Francesco Turrini. Based on classics, albeit with contemporary twists, all fifteen of the new cocktails focus on at least one of the five key spices used within the restaurant kitchen. A ‘Chilli Julep’ (£14), for example, favours Amaretto Disaronno juxtaposed to bourbon, combined with passion fruit, Kaoliang and chilli-infused honey, plus chillies of the same variety used within the restaurant’s signature Red Lantern dish. ‘Five Spice Mary’ is made with the choice of either vodka, gin, or tequila – the latter of which’s agave profile worked particularly well alongside the properly spiced tomato juice and thin ribbons of shaved celery.

It was the ‘Old Peking Fashioned’ (£14), however, that was the new menu’s most exciting drink, albeit sounding absolutely absurd. We’re aware that duck and brandy are close friends, so it’s not too surprising that the tried-and-tasted flavour combination has been combined into a drink. Instead of using a more traditional whisky for this take on the classic Old Fashioned, Hennessey cognac forms the base of the drink, having been infused with Peking duck from the Hutong kitchen. Left to permeate for a week, the duck skin is then frozen and removed from the brandy, though the taste remains. The final result has an unbelievably rich, slightly spiced flavour profile that’s teamed with roasted sesame syrup, chocolate and angostura bitters to create an exceptionally well-balanced cocktail that tastes surprisingly delightful. What’s more, the drink is served with a pancake filled with both chocolate and sesame popping candy.

Though drinking here is by no means cheap, the price of visiting The Shard’s 72nd floor viewing platform is almost double that of Hutong’s must-try ‘Old Peking Fashioned’. And given the choice, I have no doubts towards which way I’d rather spend my time and money.