By Linda Marric @Linda_Marric Directed and produced by Otto Bell, The Eagle Huntress is a beautifully executed documentary account of how a teenage girl from a nomadic khazkh minority in Mongolia broke thorough a gender barrier upheld by hundreds of years of tradition, to become the first female to ever hunt with a bird of […] 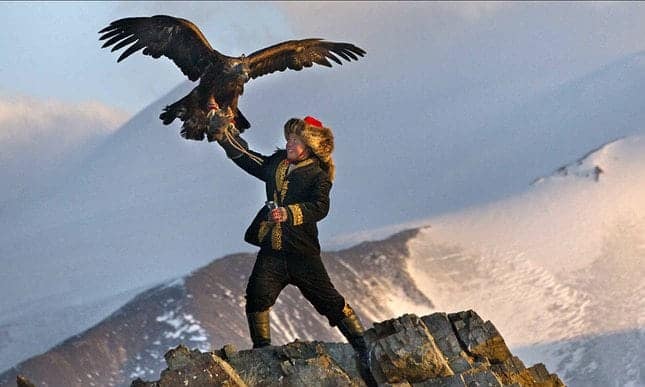 Directed and produced by Otto Bell, The Eagle Huntress is a beautifully executed documentary account of how a teenage girl from a nomadic khazkh minority in Mongolia broke thorough a gender barrier upheld by hundreds of years of tradition, to become the first female to ever hunt with a bird of prey on the Altai mountains. Bell used his life savings to fund the film after coming across the story online, relying only on a few photos taken by Israeli photographer Asher Svidensky. Seduced by the cinematic beauty of the photos and the landscape, Bell went on to make one of the most stunning films of the year, a film which is already being talked about as a contender for best documentary Oscar.

In between helping raise her brother and sister and achieving excellent grades at school, 13 year old Aisholpan dreams of taking on a task never before achieved by any woman of her kind. Spurred on by her father and with her grandfather’s blessing, she is determined to ignore the naysaying elders of her tribe, and prove that a girl can be every bit as good an eagle-hunter as any man before her. First she must find and tame an eagle that only she can train, then enter the annual Golden Eagle Competition.

From the offset, there is a sense that director Otto Bell is less interested in the authenticity of a “fly on the wall” format, but is instead comfortable in setting up reenactments of scenes which had taken place before he took on the project. In a scene which sees Aisholpan trying to capture her first eagle, Bell uses suspenseful set-up shots to achieve dramatic effect. The film is also firmly held together with a classic three act narrative which centres around getting to the competition by any means necessary. Bell cleverly uses the stunning snowy landscape as a background to tell this unusual tale; added to this is the inspired voice-over by Daisy Ridley (Star Wars’ Rey), who almost acts as a surrogate for Aisholpan herself. Ridley’s youthful delivery adds a sense of familiarity to the story – it drives home the idea that no matter where they come from, all girls have the same fire in the belly driving them to break the glass ceiling. However, Ridley’s voiceover being the only aspect of the film in the English language can sometimes feel like an anomaly in a piece which is almost all in Kazakh dialect. The film could perhaps have benefited from either having more voice-over or none at all, this I believe is due to the long breaks in between each bit of voiceover, which can sometimes result in the viewer being jolted out of the comfortable feeling of a well executed sub-titled movie without added artifice.

Other than a few issues with dramatisation, which could at times be construed as facile, The Eagle Huntress is on the whole beautifully executed. First-time director Bell should be proud of what he has achieve in telling this beautiful story – and its universal message will no doubt see him rightfully rewarded come awards season.

For more like this see our Indochine review: http://www.thelondoneconomic.com/film/indochine-dvd-review/07/12/

The Eagle Huntress is on release from Friday 16th December.