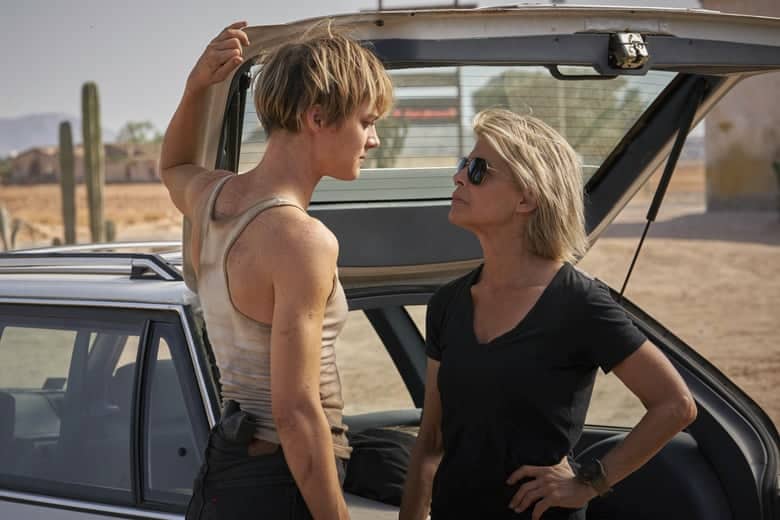 For most fans of Sci-Fi, Adventure and Action that were born in the early 80s or grew up during the 80s, the Terminator saga is definitely one of their go to sagas and considered one of the best of the genre. T1  was ground breaking and T2 became a landmark in the genre  not only proving that a sequel can actually be better than the original, but  breaking barriers in every  way at the time and also becoming iconic  for a generation, providing some of the best well known pop culture lines  such as “hasta la vista, baby”.

You might think that Terminator is the story of John Connor and how he becomes the great leader of Mankind’s Resistance (2029-??) defending us against the machines  created by Skynet after Judgement Day ( August 29th 1997). Dark Fate reminds us it’s his mother Sarah’s story.

Every, but every fan of Terminator has T2 as a reference  for the saga, I must admit I am no exception.  I grew  up at a time where there was barely any strong, kickass women in Action & Sci-Fi  films,  and then, as a breath of fresh air, there was this character, Sarah Connor, a woman  that being in T1  a sweet and innocent waitress transforming into a hardcore, kickass woman one had ever seen, a reference and role model for so many young women  at the time. Sarah Connor is definitely one of the strongest point of Terminator and in Dark Fate  she is back with a vengeance.

It’s impossible not to draw comparisons, but I can easily say that as a hardcore fan of the saga,  that TDF is the best sequel to T2 by far! This time producer James Cameron and director Tim Miller, although introducing other very interesting characters, focus more on Sarah’s story (as it should have been) and  we finally learn more about what truly happened to John and to mankind after our favourite T-800 dies at the end of T2.

Linda Hamilton is on point as Sarah, great in every single scene she is in. Arnold  is the perfect “humanised” T-800, Mackenzie Davies is spot on as Grace, and Gabriel Luna is awesome as Rev-9 , just as terrifying  as  the T-1000,  definitely giving you  T2 vibes. One of the points that made Terminator so  scary was how realistic it was  in the sense of how close it was to reality comparing  with how technology was evolving  and TDF makes it even more realistic in this regard.

Overall, I would say that TDF brings a very satisfying closure to the original saga, however, it would be very interesting to see where Cameron,  as the mentor of the franchise, would like to take this to.