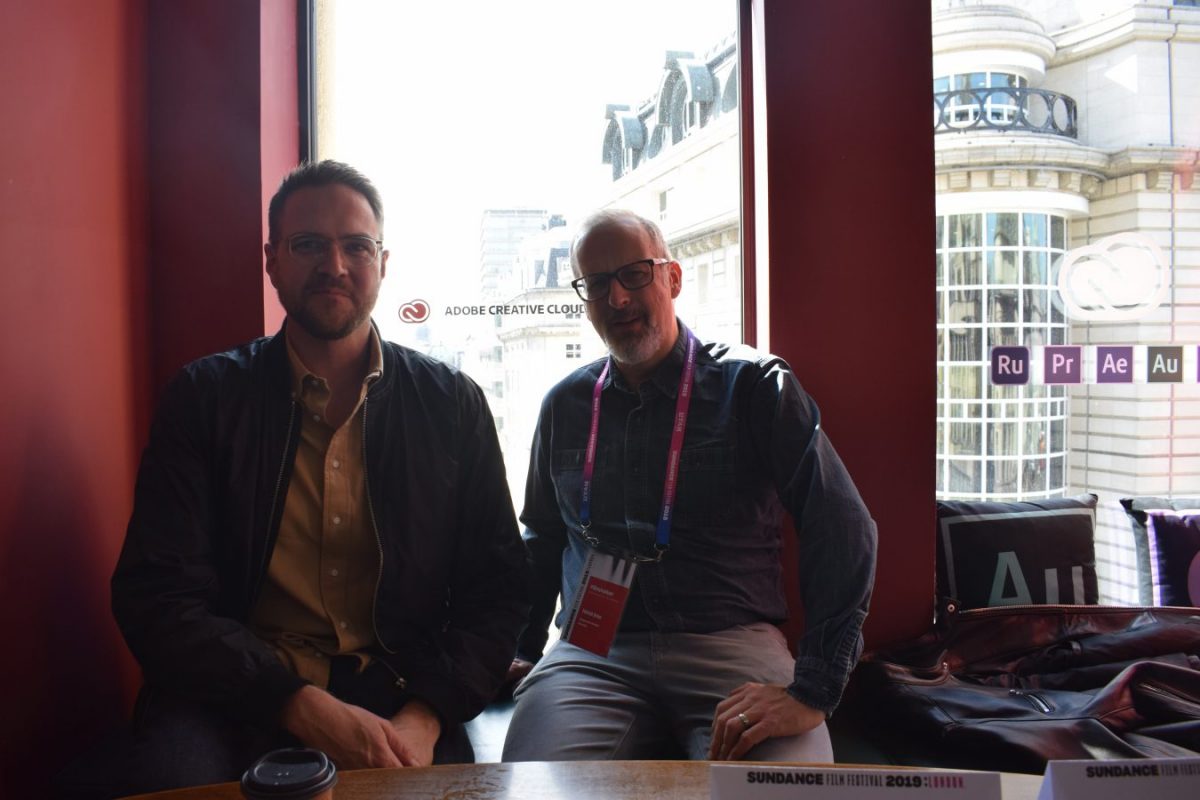 What may surprise considering the relatable workplace relatable tensions of Peep Show’s JLB Credit and now Lucy’s edible cutlery company in Corporate Animals, is that writer Bain has never had to suffer an office environment: “I have tried to avoid having a proper job pretty much successfully my whole life. The script [for Corporate Animals] was originally written with the characters being members of a film crew. This was changed early on as it didn’t seem fresh but there was a desire to retain the atmosphere of a set: being in it together but also trapped within a very clear hierarchy. In Corporate Animals this hierarchy is challenged.”

Brice too is as similarly blessed as Bain: “Before becoming a filmmaker I was a valet parking manager, running an account at a hotel with thirty employees at age 19. It was a good lesson in what I don’t want to do with my life. Putting a suit on every day, coming to work and getting into that grind of doing the same thing every day and everything blending into each other.

“That experience can be useful in terms of directing but it was also a lesson in if you’re not happy with where you are at in your life you can make a shift. Outside of that I have never worked in an office before.”

In a recent Guardian article, Bain reiterated his support for diversity programmes and the need for greater inclusion in the film industry. He also revealed an upcoming American Peep Show with female leads, penned by Karey Dornetto (Portlandia, Community).  Corporate Animals takes digs at potential issues with diversity programmes, both with a satirical opening video and Lucy at one point confronting underling Jess, revealing to her that she only hired her for her race and gender. Of the decision to include moments like these, Bain says:

“The film touches on a very hot button issue but in a way that is in reference to someone who is monstrous and acting in bad faith. It’s not meant to be a swipe at anything particularly or in general about culture such as affirmative action or positive discrimination. For me, it was just a way in to show another darker and more disingenuous, dishonest, manipulative and self-serving side of Lucy.”

“I am quite a sick and twisted individual with a lot of personal problems which I like to work out on screen.”

While pitched as a comedy, Corporate Animals certainly has its more unnerving moments, from hallucinogenic water to so-called ‘casual cannibalism’. Brice, who as well as comedies such as The Overnight has directed the found footage horror Creep trilogy, sees overlap between the genres: “If I’m going to make a horror movie it’s going to be funny in places and if I’m going to make a comedy it is definitely going to have some darker elements to it. The projects that I’ve done so far have all found themselves in a middle space between genres. That’s just me trying to maintain my own freedom when it comes to making stuff and not feeling like I have to cater to adjusting my film to feel like it fits into one category.

Spare a thought for the wasteland that is Payne (The US version of Fawlty Towers), AbFab, The Inbetweeners US, Us and Them (an American Gavin and Stacey) and many more. For every The Office there seems to be many a UK to US sitcom adaptation that has crashed and burned. As to how this iteration of Peep Show stateside may have a chance of success, Bain explains: “One of the reasons of doing a female version is that we felt like the biggest mistake we can make is trying to photocopy the original and set it in Indiana. A very straight remake could hinder because people who know the original television show will be disappointed as it won’t have the same chemistry of the cast and it will just feel less than. There was a consensus that the most exciting way of doing it was coming at it from a different angle, not only recasting obviously but reimagining the characters.

“The thing I most miss about writing Peep Show is writing the thoughts of Mark (David Mitchell) and Jeremy (Robert Webb), because it is such a unique thing you can get to do. I just felt instinctively that hearing a woman’s thoughts was going to be an exciting thing.”

An unaired pilot of Peep Show featured a POV perspective of Olivia Colman’s character Sophie. As to whether he would have considered including her as a female perspective now, Bain says: “Upon trying it then it felt like you were spreading yourself too thin, either everyone in the fishbowl has a voice over or you keep it small, and we chose two leads so you can play one off against the other. It was a good trial and error to try a voiceover with Sophie but I certainly wouldn’t change what we had.”

Patrick Brice came to prominence with found footage horror Creep, featuring an overly friendly Mark Duplass. A sequel was released in 2017, and Creep 3 is currently in development. Especially considering Bain’s original idea to have a film crew trapped underground, it is worth considering Brice’s position on found footage and whether it can lend itself to comedy as well as horror: “I’m not a big viewer of found footage films, so I honestly don’t know what other people are up to in that world. It’s very difficult to make films in this genre. When you’re making a found footage film you are essentially creating a whole added layer of problems for yourself as a filmmaker. You can come up with the best most creative solution for a problem you have but then you have to justify why the camera is on at any given moment.

“In trying to figure out Creep 3 right now, I am finding myself in the same place I was with the first two movies. We’ve come up with five or six ideas so far that for the most part have thrown in the trash and rewritten in large part for the reason of being unable to justify the camera being on. There are probably places to go with this genre, but I have an awareness how difficult it is. There are enough things I am excited about exploring in my filmmaking outside of the Creep movies that I don’t see myself making another found footage film. I am though very pleased with the response to them and knowing that there is an audience for them.”

“A pressure cooker is sometimes your best friend in terms of cranking up tensions within relationships and is one of my favourite things to write.”

With Creep set almost entirely in two houses and much of Peep Show focused around one London flat, both Bain and Brice are accustomed to works of limited location. Corporate Animals is set almost entirely in one cave, though this doesn’t stop moments ranging from Isiah Whitlock Jr consuming his own urine to the Ghost of Britney Spears.

Of creating entertainment in such confines, Brice says: “It comes down to the writing and trying to create as many reasons as possible to film different spaces of this one contained location. Keeping the film narratively tight is one consideration but then also creating reasons for them to occupy specific places.

“I’ve gone from making two movies in houses to making a movie in a cave. For me, having a cave was like having a wonderland of space compared to what I had to deal with before.”

Corporate Animals will be released in the UK on August 9th.