by Joe Mellor
in Film, Must Reads 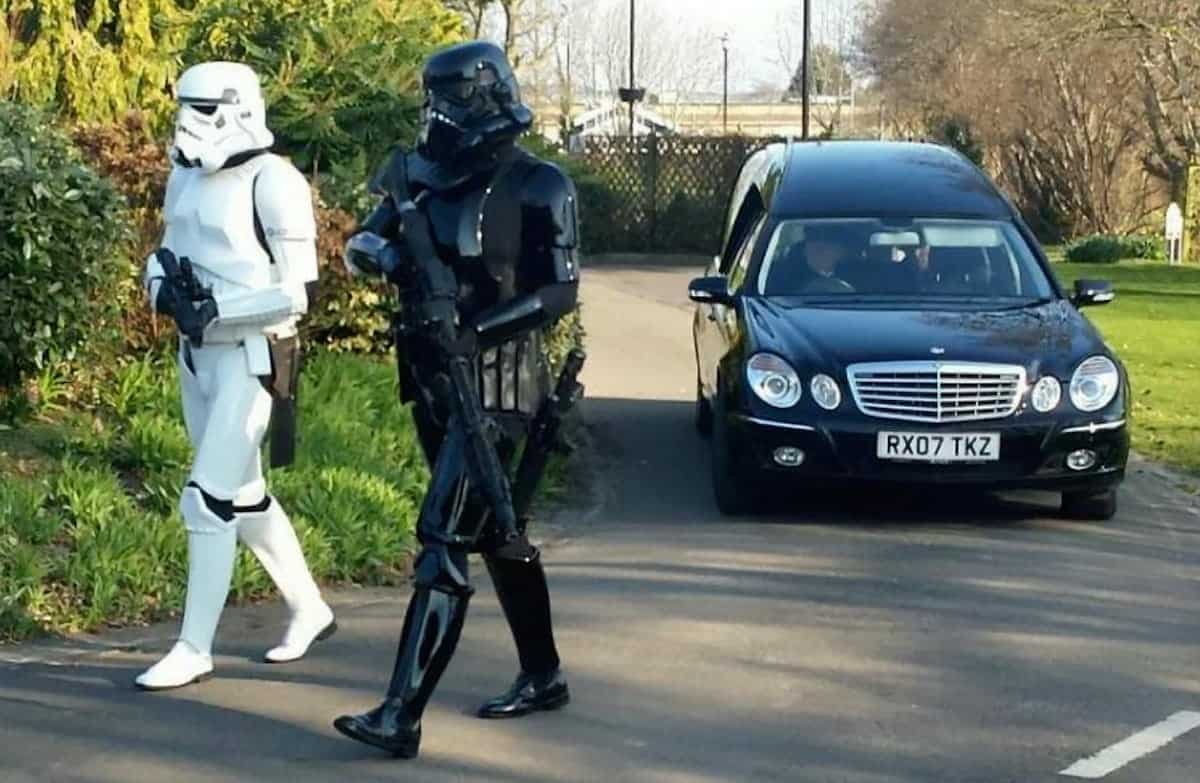 A sci-fi mega-fan has been given a Star Wars themed funeral – with the hearse lead by Stormtroopers.

He had requested a Star Wars themed funeral and his sister made sure he got his final wish.

The funeral at Yeovil Crematorium in Somerset on Friday had Stormtroopers leading the hearse as it approached the venue.

The coffin, complete with ‘Jedi’ in floral lettering, was carried into the Crematorium with stormtroopers walking in front.

The franchise’s iconic Imperial March theme was played in an emotional Yeovil Crematorium before the start of the service.

A floral message of ‘Jedi’ was also accompanied with a lightsaber made from flowers to Roger, who worked in hospitality.

Tara said: “My brother has loved Star Wars for as long as I can remember, he has an amazing collection of memorabilia and toys.

“He had two stormtroopers, one white and one black ops from the UK Garrison attend out of the kindness of their hearts after being contacted by one of Roger’s close friends.”

Over 60 people, including friends and family, attended the service dressed in Star Wars T-shirts and suits.

After the service the ending theme from ‘Star Wars Episode IV: A New Hope’ was played as the congregation exited and said bye to a beloved uncle, brother and son.

Tara credited the service and singled out the reverend for praised, describing him as “amazing and supportive to our unique send-off”.

“I only wanted to give my much loved brother a good send-off”, she added. Currently I’m trying to come up with something creative for his ashes.”

The force is strong in the Conway family as Tara remarked she named her son “Harrison” after Harrison Ford’s character Han Solo.

The group behind the stormtrooper costumers, The UK Garrison, posted a tribute to Roger on their Facebook page.

It said: “The UKG would like to pass on its deepest condolences to the family and friends of Roger Conway who so very sadly passed away recently.

“A huge Star Wars fan, Roger stated before he passed that it was his dream to have Stormtroopers lead his coffin into his service.

“Today we helped fulfil his wish and we sincerely hope our attendance helped his family just a little bit on such a deeply sad and difficult day for them.

“RIP Roger and we hope we gave you the send-off you wanted.”