Review by Leslie Byron Pitt B-Movies: When you keep them simple and sharp, you often heed the best results. The Shallows never overstays its welcome, nor does it overcomplicate its obvious silliness. It takes a Dario Argento approach towards proceedings. As much as we like to often deny our baser urges, sometimes our film cravings […] 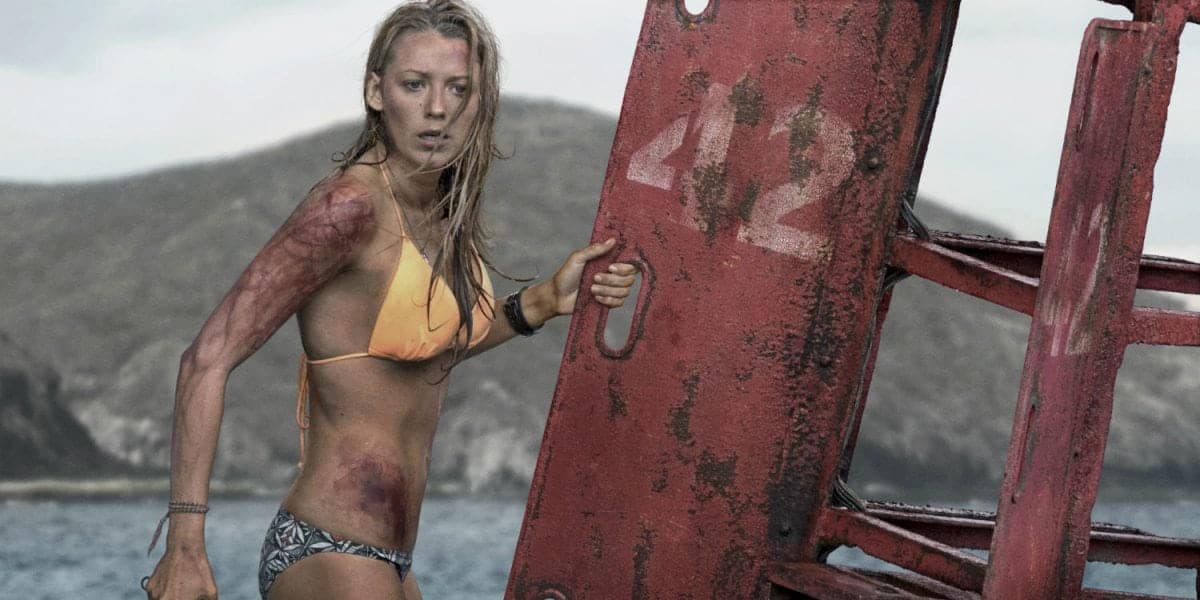 B-Movies: When you keep them simple and sharp, you often heed the best results. The Shallows never overstays its welcome, nor does it overcomplicate its obvious silliness. It takes a Dario Argento approach towards proceedings. As much as we like to often deny our baser urges, sometimes our film cravings will drive us towards an attractive person being tormented by a killer shark. Just this writer? Ok then.

The Shallows introduces us to its lead character; Nancy (Blake Lively), in a way that doesn’t feel too different from so many genre features. Visiting a secret beach which her newly deceased mother surfed at before she became pregnant. Nancy takes upon herself to ride the waves on her own after being let down by her travel partner (suffering from a case of the “Irish flu”). So far so teen horror, right?

While surfing around this cove which is considered a paradise, trouble arises when a Great White Shark pays a visit and decides upon itself that the small area would be a great feeding ground. Suddenly Nancy finds herself trapped on a dead, bleeding whale, only 200 yards away from the beach. Far enough that it’s difficult to sense that there’s a sense of danger. Close enough for to be served up as an easy entrée for the forever hungry brother of Jaws. That’s the gist of the Shallows in a nutshell.

Other critics have somewhat baulked at the mandatory backstory to proceedings. Nancy’s surfing holiday is a way to deal with the loss of her mother. The death has made her reconsider her doctor’s degree. Yes, it’s all very obviously a way to ensure that when the proverbial feces hit’s the fan, our suspension of disbelief doesn’t get used up all too quickly (we have the films hilariously ludicrous climax to come, you see). Such lean slivers of character background are well constructed and relatively plausible for what this film is trying to achieve. The Shallows does little to subvert or reinvent its narrative tropes (it’s clear what this fight for survival is REALLY getting at), but the simple information the film gives to us is economic, relevant and does enough to ensure that an audience actually gets behind Nancy as her fishy nemesis circles her from within the briny deep.

To be completely honest, the fact that this is the Blake Lively showcase helps sell the film anyway. The camera does indeed leer upon her “Oakland booty” once or twice, but not as much as one would expect. Both Lively and director Jaume Collet-Serra work hard at portraying Nancy as a home-spun Texas girl, who also knows how to cut a wave in half. Lively has never been an actress that rises to the top in consideration of her generation of performers, yet here her displays of resourcefulness are as equally as believable as her succumbing to heatstroke.

Less believable is the film’s silly and intentionally amusing last third which has Collet-Serra have a little fun with this shark flick. Then again, this shouldn’t be a surprise to those who saw his slasher flick remake; House of Wax. A film much maligned for its casting of Paris Hilton, yet craftily having her in the film to have her tongue and cheek murder scene as a source of attraction for viewers with a love/hate relationship for celebrity gossip. This is of course the same thing we see here with Lively who’s more known to some for her Paltrow-lite homemaking than her performances. Having Blake hold her own by tearing apart wetsuits and stabbing things with shark teeth is a welcoming juxtaposition. It’s especially fun that Lively delivers a solid turn while doing it.

It’s important to realise that Collet-Serra is one of those types of directors. Not an innovator, but a grafter of b-movie thrills who gets the best of what he’s given. Often he’s given what could be considered a so-called “flavour of the month”. Paris Hilton in 2005, Action-Oldie Liam Neeson ten years later. The Shallows is the best I’ve seen from the director. The sun-kissed visuals have a decent amount of scale for such a small film. He gets the best out of his lead performer and the tension is consistent throughout. The Shallows nashing antagonist doesn’t rival Bruce the shark as some critics have considered. The film is too linear and obvious to get near Spielberg’s classic. However, The Shallows has enough workable jump scares, spilt guts and bleakly comic moments to make it one of the best shark features since Open Water (2003). While that may still leave a viewer skeptical, consider this: This film has a seagull named Steven. A worthy gag for a deserving B-movie.

The Shallows is out in Cinemas 12th August