Review by Leslie Byron Pitt In Poor Cow; Joy (Carol White) may be the name of the woman we watch in this slice of life tale, yet as we observe this young woman’s life, we sense that joy is merely a title for her. She gains little pleasure from the choices she makes. As Joy […] 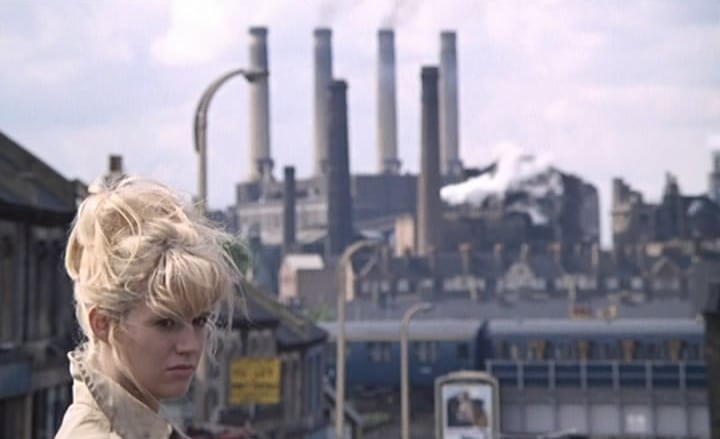 In Poor Cow; Joy (Carol White) may be the name of the woman we watch in this slice of life tale, yet as we observe this young woman’s life, we sense that joy is merely a title for her. She gains little pleasure from the choices she makes. As Joy narrates her story in doleful narration, it often speaks of love and aspirations. The reality always seems far from the talk.

Ken Loach’s first cinema feature is the perfect place to start when taking on his work. Poor Cow never feels overtly political, but it’s impossible not to notice that Loach is commenting on the structural imbalance of the working class. The men who occupy Joy’s love life are criminals with long rap sheets. There’s no wish to obtain a decent job, not just to their moral standpoints (“Everybody’s Bent!” suggests her abusive husband Tom), but there never appears to be that many resources around in order to provide a decent footing.

After Tom’s imprisonment, we then witness Joy make a catalogue of erroneous choices in her life, ranging from falling for one of Tom’s criminal associates; Dave (Terrance Stamp) to becoming a model for a seedy photographer’s club. Loach’s film sets the tone by filling the film with coverage and reaction shots of melancholy, elderly Londoners, demolition sites and dilapidated housing. All this is juxtaposed with the musical stylings of folk star Donavon. As part of the British New Wave movement of movies, but makes Poor Cow so stunning at times is how it feels worlds apart from the likes of John Schlesinger’s Darling (1965) or Roman Polanski’s Repulsion (1965), both enjoyed noting the new trendy swinging London, despite their themes.

Interestingly, what these three films have in common are entrancing and complicated performances from their female leads. The late Carol White’s doe-eyed display as Joy is at times a tough watch, if not for her choices, for her narrow aspirations as well as the Loach’s use of title cards and music to contradict what we’re viewing. At the film’s peak, Joy’s belief that all a woman needs are a “man and a baby and a couple of nice rooms” is near heart wrenching. Not only is it a simplistic compromise to observe in the modern age, it’s a conclusion that incorporates the idea that Joy is willing to become completely insular to someone else.

What isn’t insular is Loach’s effect on British cinema. It’s difficult to think of what U.K cinema would have been like without Loach’s influence. The “gritty” urban social-realist dramas that the British cinema is often known for, is often eyerollingly derided as we now see so many of its elements within T.V and cinema. However, it’s important to realise that a film such as Poor Cow with its vérité-like style, and naturalistic performances show their worth as a document of what’s changed and what’s remained within British society. Kitchen Sink drama came before Loach, but with films like Poor Cow, he made sure that he would be the standard. Poor Cow may be approaching 50 years, but much like its director, who at 80 is still working and rallying today, it has not lost its significance.

Extras: The DVD comes with a solid set of extras including a short doc about the British New Wave, perfect for media students who will no doubt be studying the likes of Loach.

Poor Cow is out now on DVD