Pilou Asbæk & Tuva Novotny interviewed by Miranda Schiller/@mirandadadada War movies strive to obtain a sense of realism and immersion. Danish feature A War is no exception. With an exception of the leads, the cast is played by real danish soldiers who have been stationed in Afghanistan. Such a decision as not only helped provide its […] 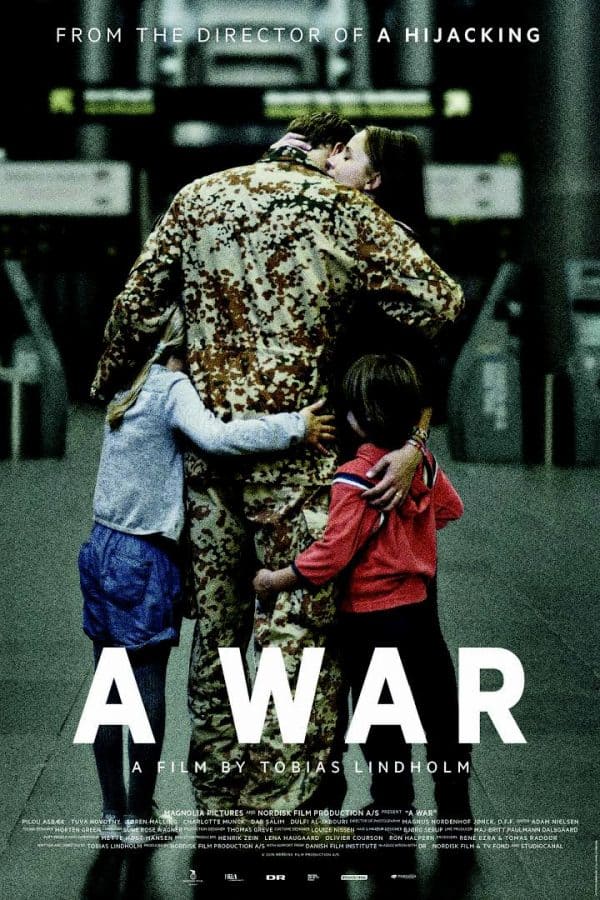 War movies strive to obtain a sense of realism and immersion. Danish feature A War is no exception. With an exception of the leads, the cast is played by real danish soldiers who have been stationed in Afghanistan. Such a decision as not only helped provide its story a strong element of truth, but also helped establish the film with a certain amount of prestige. A War has been selected as the Danish entry for the Best Foreign Language Film for the 88th Academy Awards.

Actors Pilou Asbaek and Tuva Nowotny discuss how such casting choices have affected their perceptions of war in general and the authenticity that it can help create.

What was it like to work with people on set who had actually been to war?

Pilou Asbaek: It is a gift. You don’t know what you’re doing as an actor sometimes, and then these guys take you under their wing and they teach you all the things they learned within the last 15 years, in a very limited time, before the shooting. It was just incredible. These guys are old-school macho men. And I’ve become very fond of them, they’re very good friends now. But if you had to portray a doctor, you would talk to doctors, if you had to portray a lawyer, you would talk to lawyers, it’s just part of your preparation, if you respect your own work.

Of course. But in most cases, if you do a film based in a hospital, the actors aren’t real doctors, or in a war film, they are not real soldiers.

Tuva Nowotny: Yes, that’s the big difference with Tobias [Lindholm]. He creates a surrounding where everyone’s authentic and real, across all of the characters. Not just the soldiers, also the judges, the kids, the kindergarten teachers, all of them are real.

Pilou Asbaek: That’s why he becomes so angry when we start acting.

Tuva Nowotny: Because he wants to create something authentic and real.

But then your character, Tuva, is often removed from these real scenes with a lot of group activity and portrayed as left alone. How was it for you to find your own character without these surroundings?

Tuva Nowotny: That’s an interesting interpretation, I don’t think I ever saw her as lonely or left alone.  I have talked to a lot of soldiers’ wives, I think it’s not so much a matter of loneliness, but just a matter of dealing with reality and doing your job. Which is taking care of that side of the business, and then also having your own job. Being the wife, or the husband, they exist too, of someone who is at war, is not just a full-time job. It’s two full-time jobs. Their main characteristic is not loneliness, but the strength of survival, they just need to have.

How did working on the film change your perception of the war?

Tuva Nowotny: Just like the audience, we’re left with the ambivalence of it, the fact that there are no definitive answers. It brings up the grey zone. It’s easy to sit at home and say, war is bad, but this really puts the finger on the spot, in terms of pointing out the exact kind of moral ambivalence that we all are faced with every day.

One of the central lines you say is “Never mind what you should have done, what matters is what you are going to do now”, would you say that’s the message of the film?

Tuva Nowotny: I’m not sure that’s right. We had an argument about that line. But I think it puts the focus on the very human center of this dilemma that the whole film is about. Do you save yourself? Or do you take responsibility? Is it morally correct to save yourself? I don’t know, but I think we can all relate to the question. I’m not at all sure what she is saying is right, but it helps to sharpen the focus on the essence of the dilemma.

When you were filming the courtroom scenes, did you know what the outcome would be, or were you left unclear?

Pilou Asbaek: The script was 125 pages long, and we only got 120 pages. We didn’t know how it would end. We didn’t know if I was going to be found guilty or not guilty. And it was intense not knowing where you want your character to end up. You always want to be this brilliant genius of an actor who knows exactly where he is going to end up.

Were you hoping for one or the other outcome and were your hopes changing?

Pilou Asbaek: We filmed both endings. Me being guilty and not guilty. But you have to see the film to know what we end up with! But I was hoping for the ending we have now. I think that’s the most dramatic one.

Tuva Nowotny: It is inevitably difficult to accept and will never feel completely right. There’s a huge moral dilemma.

Pilou Asbaek: We had a wonderful experience at the world premiere in Venice. Without wanting to give too much away, at one point someone lies in the courtroom. And the 300 Italian people in the auditorium just got up and cheered. You gotta love the Italians for that. But at the same time, we were like… the moral compass is pretty fucked up in this room right now!

There’s also a hint that, regardless of the court ruling, his war experiences will stay with him in more than one way.

Pilou Asbaek: War is going to stick with you, I’ll tell you that. I don’t think there’s a soldier, or any person that’s been to war, who doesn’t bring it back home. It’s not happening.

A War is currently out on UK theatrical release. Our review can be found here