I didn’t grow up with Tina Turner’s music. The first time I was aware of her was through her 1991 blockbuster Simply The Best collection, which swept up the highlights of the second phase of her career and seemed to be in every single CD collection I saw in the 90s. It was probably this […] 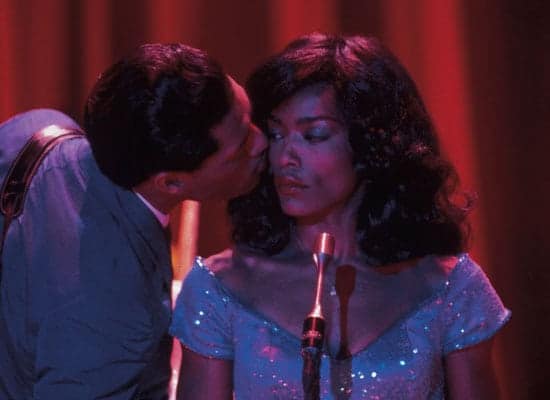 ANGELA BASSETTWHAT'S LOVE GOT TO DO WITH IT© Touchstone

I didn’t grow up with Tina Turner’s music. The first time I was aware of her was through her 1991 blockbuster Simply The Best collection, which swept up the highlights of the second phase of her career and seemed to be in every single CD collection I saw in the 90s. It was probably this that meant I didn’t see What’s Love Got To Do With It? for some years after it came out, because my overriding experience of Turner at that time was being annoyed by the omnipresence of her bellowing ‘The Best’ out of the speakers in the kitchen of every single last one of my friend’s mums.

What’s Love Got To Do With It? goes further back than that best of, to the beginning, when Tina was still known only as Anna Mae Bullock (Angela Bassett), from Nutbush Tennessee, and covers (and heavily fictionalises) the period from 1958 to 1980, her abusive marriage to Ike Turner (Laurence Fishburne) and the music they made together. Brian Gibson’s film (loosely adapted from Tina’s autobiography ‘I, Tina’ by screenwriter Kate Lanier) follows a fairly standard rise, fall, and rise again music biopic structure, from Tina’s childhood in Nutbush we follow her as she moves to the city and meets Ike, they start to have some success and get married, as the success builds their marriage becomes ever more abusive until Tina finds the strength to leave with only her stage name and begins to make music without Ike.

As the film is, structurally, fairly basic, it stands or falls on the performances and there are three that are the key elements of the film: Bassett, Fishburne and Tina Turner herself. There is no doubt that Angela Bassett is a brilliant actress, and the nuances of her performance here are always impressive, but it takes a while for her to grow into the role. At 34, she’s a touch mature for the 19 year old Anna Mae of the early scenes, but what she nails is the physicality, the transformation in the way Anna Mae holds herself when she’s on stage is something we see from that very first performance with Ike, and it’s striking how just in the physicality Bassett clues us into the very different dynamics on stage and off, even before the film first shows Ike beating Tina. This emphasis on physical presence is very much a feature of Laurence Fishburne’s work as well, time and again we see Ike standing, resentful, in the back with his band, staring daggers as the charismatic Tina owns the stage. It’s a pity that Brian Gibson, when he shows a particular performance of Proud Mary, doesn’t use the same staging as was on the TV show it was broadcast on, with Ike bluescreened in the background, looming over Tina. He’s smiling in that performance, but having seen the film the staging takes on a sinister feel.

Beyond the physicality, the performances are just outstanding. Fishburne plays Ike first with an arrogance that might seem earned – he was a brilliant musician – but that feels like a put on from quite early on, and the process of letting that mask slip is both credible and scary. In a performance that is often big, though controlled, Fishburne’s most striking moment might be one of his quietest, as Ike sits and listens to Tina’s first solo release, ‘River Deep Mountain High’. The resentment in his face as he realises it’s a better song than anything he and Tina have yet made together is plain, but it’s the insincerity of the way he tells everyone how great a record it is that is most striking.

Bassett is also superb, especially as the film goes on and both she and Anna Mae seem to become more comfortable as Tina Turner. As the film goes on, Bassett seems to inhabit the role ever more, capturing not just the presence but the specifics of Tina’s unique performance style. Dramatically, she’s great, particularly in scenes in which Ike is trying to get Tina to ‘sing it the way I tell you’, It’s interesting to watch the dynamics shift in these scenes, from an early moment in which Ike’s attention to detail and pushing do change, and help, the performance, to the recording of Nutbush City Limits, where the critique is always cruel and devolves into the film’s most upsetting scene.

It’s impossible to talk about Bassett’s performance here without discussing the way it intersects with Tina Turner’s. Tina recorded new vocals to dub Bassett for the film, this is where the specificity of Bassett’s work comes into play. Tina’s voice is easy to parody but tough to replicate, so the dubbing makes sense, but Bassett gets every nuance down, particularly the expressions Tina makes when she sings, and this allows us to believe that voice is coming out of her body. There are some great subtleties about Tina’s vocal work here; listen for the adjustments when Ike is critiquing her in scenes, but it misses one thing. Tina was never a subtle singer, but when you go back to the early Ike and Tina records like ‘Fool In Love’, you can hear a difference in her vocals, it’s purely an age thing, but that’s the one subtlety we miss in the music here.

The music, though, is outstanding. Fishburne does his own vocals confidently and the performances are meticulously staged, but if you’re into rock n’ roll, or rock n’ soul, which is probably how I’d describe what Ike and Tina’s music evolves into, you won’t find it done much better than this. The biographical sections of the film can be a hard slog as they dig ever further into some of the nastier aspects of Ike and Tina’s relationship, so increasingly it becomes a joyful respite when the film bursts into song for a while.

While it heavily simplifies and fictionalises the story (for instance, Tina’s first child was not Ike’s son, which is what’s depicted here), What’s Love Got To Do With It? Is an effective piece of storytelling that gets the broad strokes right and nails the specifics where they matter. It’s perhaps not the film to watch if you’re a die hard Tina fan who wants to see her story done totally accurately, but as a showcase for her music and as a performance piece spotlighting the talents of Bassett and Fishburne it’s little short of a triumph.