With his debut novel, Toxic Beer, Simon Bullock transports readers to a galaxy of madcap humour not to be missed.

by Keith Ayago
in Entertainment, Literature 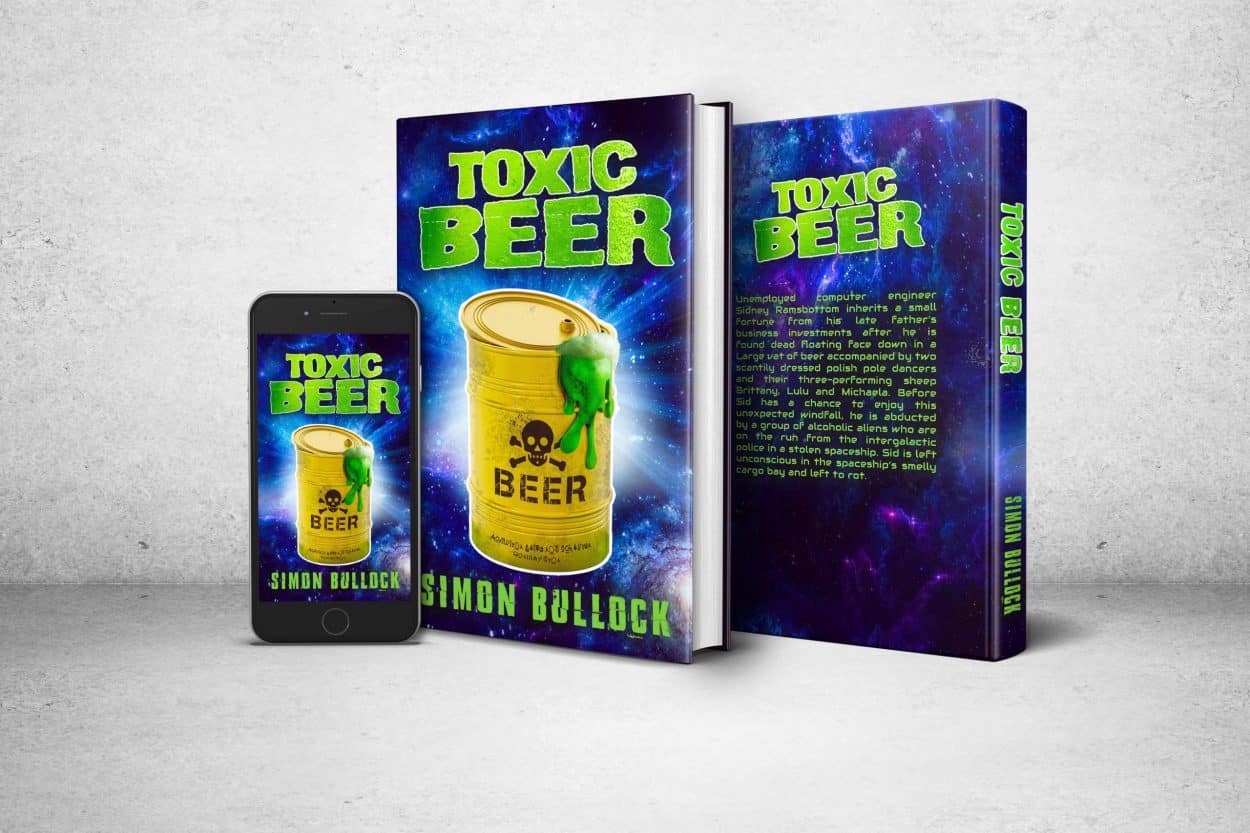 Toxic Beer, the debut novel by comedy sci-fi author Simon Bullock, has been a decade in the making, but its roots go back much further.

For this hilarious science-fiction farce owes a great debt to the author’s literary idol, the one and only Douglas Adams—creator of The Hitchhiker’s Guide to the Galaxy (H2G2) series.

Like Adams’ baby, Toxic Beer is packed with memorable, larger-than-life characters who find themselves in a delightfully silly situation that Monty Python would be proud of.

Yet while the novel perfectly captures the absurd fun of H2G2, it is far from a pale imitation, representing a fresh, confident comic voice with his own original universe for us all to explore.

Across its 186 pages, Toxic Beer is packed with inventive, laugh-out-loud jokes coming in thicker and faster than meteors during the annual Perseids shower.

The zany premise for the novel is that planet Earth is being secretly invaded by creatures not of this world. They’re not so much bug-eyed monsters, however, as bleary-eyed ones, for our would-be conquerors comprise a group of alcoholic aliens.

For the past century this hapless band has been on an extended booze cruise of cosmic proportions, all the while on the run from the intergalactic police after making off with the Andorran ambassador’s ship.

Unfortunately, their merriment has ground to a halt after encountering two serious problems. Firstly, the ships’ engines are leaking and the toxic waste they generate is soon going to be deadly if not disposed of.

Secondly, their supply of alcohol has run out—something that has already caused the deaths of some crewmembers after, unwisely, they decided to sup on the toxic waste (which apparently tastes similar to “Meloovian Pale Ale, but with a far worse kick).

The captain, who is a homicidal maniac at the best of times, demands action and sets his chief engineer, Harry, to sort it all out.

Harry, who has recently been promoted after the captain disintegrated his former boss, formulates an audacious plan to hit the nearest planet with intelligent life, Earth, to dump the toxic waste while picking up spare parts for the engine and, hopefully, a fresh supply of alcohol.

To avoid detection, the aliens park on the Moon and send a shuttle down to Britain. For the away mission, Harry selects his assistants Chas and Dave—who make up in the beer-finding department what they sorely lack in intelligence—along with an experimental, shape-shifting android repurposed from the ship’s deactivated robotic security team.

Here, they don the disguises of international businessmen and enter into discussions to purchase a brewery which they will then use to sell the toxic, lethal sludge to unwary customers.

There are only three people who can stop them.

The first member of this unlikely heroic trio is unemployed computer engineer Sidney Ramsbottom, who has unexpectedly inherited the brewery from his recently-deceased father, George.

There was no love lost between father and son, but Sidney is somewhat surprised to learn that George was found dead at the bottom of a vat of beer in a “compromising position” with two scantily-dressed pole dancers and three performing sheep, Brittany, Lulu, and, Michaela.

What he doesn’t know, however, is that this tragic accident was set up by Chas and Dave, who killed his father after spurning their offer to purchase the brewery. They are now turning their attention to him, with an offer he can’t refuse (if he wants to remain alive).

As the landlord’s wife reports, Vangelis has suddenly become much more attentive, and has also developed the curious habit of connecting his John Thomas to the shaving socket at night.

The aliens have no qualms about obliterating anyone who gets in their way so Sidney, John, and Vangelis (if he really is Vangelis) will need all their half-wits about them if they are to survive, let alone prevent the mass poisoning of beer-lovers everywhere.

The first in a planned trilogy (should that be a triple?), Toxic Beer is the epitome of timeless British humour, populated with loveable, laughable dimwits and gently satirical swipes at everyday life.

Not least of these, of course, is the Great British love of beer and it’s no surprise to learn that the novel was originally inspired by the notorious 1980s’ continental British booze-cruises.

While Bullock doffs a cap to his literary hero, Douglas Adams, the comedy style is more on a level with another classic British institution, Red Dwarf, in the sense that familiar sci-fi tropes are presented for laughs rather than the author trying to extract more donnish humour from complex, cutting-edge science.

Given this, Toxic Beer has the best of both worlds—an eccentric set-up for H2G2 fans to bite into (with a number of affectionate Easter eggs to watch out for) and broader, earthy jokes for wider audiences.

The characters Chas and Dave steal the show. They are gloriously inept and are guaranteed to screw up whatever they set out to achieve.

But there’s so much to savour here and it’s great to know that this novel is far from last orders, with the next book in the trilogy, a prequel entitled The Last Intergalactic Booze Cruise, expected later this year.

In preparation, grab yourself a copy of Toxic Beer and be ready to down it in one—it’s that good.

Toxic Beer by Simon Bullock is out now on Amazon in paperback and eBook formats, priced £9.07 and £3.02 respectively. For more information, visit www.simonbullockauthor.com