According to new research, the elusive Holy Grail may have finally been discovered … encoded within the plays of William Shakespeare. Indeed, one of hundreds of subtle references the Bard seemingly makes to the Holy Grail could be the ‘Poisoned Chalice’ prophesied by Macbeth to bring about his ultimate downfall. 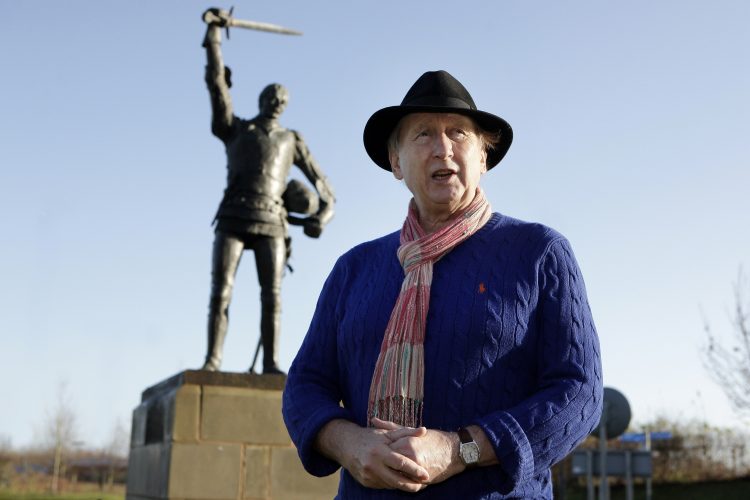 Shakespeare expert Paul Hunting has spent nearly a decade analysing the Bard’s most famous plays. His bestselling new book, Shakespeare’s Holy Grail: The Ancient Secret Revealed, focuses on three of them: Macbeth, Hamlet and The Tempest. In order to perceive what he believes are hidden spiritual meanings within, Hunting asks radical unorthodox questions such as, ‘Is Macbeth the story of how Satan was defeated by Christ?’ ‘Is Hamlet the story of how Christ defeated Satan?’ He firmly believes the answer is ‘yes’, and that these plays contain a multi-layered code that reveals secret spiritual teachings, the true ‘Holy Grail’, dating back thousands of years.

The Holy Grail may finally have been discovered… hidden in William Shakespeare’s plays, experts revealed yesterday.

Popularly believed to have been the chalice that Jesus drank from at the Last Supper, the sacred relic has been searched for since the Middle Ages.

The elusive object, which according to tradition was also used to collect Christ’s blood at the Crucifixion, is said to hold mystical powers and its whereabouts has preoccupied generations of amateur and professional academics alike.

But despite this, the Holy Grail has never been found.

According to a new theory, however, the fabled artefact may not be a cup at all but the key to a collection of radical spiritual teachings shared by Jesus that have been supressed for nearly 2,000 years.

And, it is claimed, this “forbidden knowledge” has been right under our noses for centuries, locked away within the 37 plays of William Shakespeare.

The reason that these spiritual teachings have never come to light before is, it is alleged, because the world-famous Bard deliberately hid them behind complex sets of secret codes to avoid prosecution for heresy during his lifetime.

That is the startling conclusion of Shakespeare expert Paul Hunting, who has spent the last seven years decoding many of the Bard of Avon’s universally-acclaimed writings.

Hunting, who is based in Warwickshire—close to Shakespeare’s birthplace of Stratford-upon-Avon—says that his findings suggest that Shakespeare’s reason for penning such celebrated plays as Macbeth, Hamlet and The Tempest was not just to entertain but also to share these forbidden teachings “with mankind”.

His conclusions, which if correct promise to revolutionise our understanding not only of Shakespeare but of spirituality, are contained in a new book Shakespeare’s Holy Grail: The Ancient Secret Revealed.

Speaking yesterday, Hunting, 74, said: “According to my research, William Shakespeare was not only one of the world’s greatest writers but also, secretly, one of our most profound spiritual masters.

“He created all his plays with the express purpose of sharing forbidden teaching with the world through a hidden subtext of his writings.

“In his plays, he alluded constantly to these teachings known as the ‘Holy Grail’. He would have known of the legends of the Holy Grail, which were common knowledge in his time, and he recognised the true symbolism of the ingredients in Jesus’ chalice.

“But he had to wrap these teachings in a complex series of codes for as protection from religious persecution.

“It is only now, after many years of painstaking research, that this code can finally be unlocked.”

The notion that the long-sought-after Holy Grail may not in fact be a cup is, in itself, nothing new.

In 1982, writers and historical researchers Michael Baigent, Richard Leigh and Henry Lincoln proposed in international bestseller The Holy Blood and the Holy Grail that the Grail referred instead to the ‘Sang Graal’ — the ‘royal bloodline’ of Jesus Christ which, they said, represented the descendants of a secret marriage between Jesus and Mary Magdalene. This became an ever greater sensation when fictionalised by Dan Brown in The Da Vinci Code.

Hunting however, believes that the real answer lies between the pages of Shakespeare’s plays, encrypted in what he believes are multiple types of code including biblical motifs, tropes, symbols, metaphors, anagrams, words, phrases, and concepts.

Having made it his life’s goal to decipher this code, Hunting says that it reveals ancient spiritual teachings that were deemed so controversial that they were subsequently airbrushed from official Church doctrine during the First Council of Nicaea in 325AD.

These “deeper truths” of Jesus were, he says, declared heretical and subsequently “camouflaged and protected” both as the “equally encrypted” legend of the Holy Grail and in the “complex symbolism” of the Bible.

Hunting says that the Grail seals, a “promise” from Jesus Christ that mankind has already and unconditionally been forgiven by God and absolved of all sins “past present and future “.

If this is correct then the idea of original sin—a concept that has been debated by theologians for millennia—is suddenly  redundant as all of humanity is, in effect, “already saved”, with the pathway to God “open and freely available” to everybody irrespective of their race, religion or sexual orientation.

Hunting, who has been independently studying theology and cryptology for 40 years, says that the ‘Shakespeare code’ explains that this promise was made by Jesus at The Last Supper, and, with the shedding of his blood at his crucifixion, “sealed between man and God in perpetuity”.

He said: “Though early Christians might have been aware of the teachings of (what became encoded as) the Holy Grail, the Council of Nicaea effectively crushed them, cutting them out of doctrine when the Church was first formed.

“One possible reason for this is simple: these radical teachings threatened the power of the early Church to control the populous, as it removed the concept of humanity being inherently sinful. Without the fear of hell and the pain of guilt, man was too free for the likings of those who want us to submit to their authority.

“The early Church elders probably could not understand that God, through Jesus, had made this promise, and that the spilling of the blood on the cross was the culmination of over 400 prophesied acts that fulfilled the scripture and broke the tyranny of Satan over mankind.

“Unrealised until Shakespeare has dramatised it, the Grail, the sangraal, sealed the New Testament promise of unconditional forgiveness for all mankind, and also unsealed the binding nature of Old Testament/Mosaic Law.

“It unsealed the very law whose violation was considered a sin. But the understandable pressures on the early Church forced them to retain all the so-called sins that Jesus came to absolve, and add in a few more!”

Hunting says that because the Bible also appears to be written in the same code as Shakespeare’s works, these forbidden teachings escaped being obliterated by the Council of Nicaea.

They remained hidden in the Bible, were retold centuries later in the 12th Century as the legend of the Holy Grail, and were later “sublimely reimagined by the genius we know simply as ‘the Bard’”.

Shakespeare did not, however, directly share the message of the Holy Grail as it would have been heretical to do so and would have “almost certainly” led to his execution and the burning of his works.

Instead, he camouflaged the teachings by hiding symbolic references in his plays in the hope that readers would “read between the lines”.

In his new book, Shakespeare’s Holy Grail, which hits the shelves this week, Hunting focuses on three of Shakespeare’s most important plays — Macbeth, Hamlet, and The Tempest — to uncover what he believes are a multitude of references to how the Holy Grail really is the key to the gates of paradise.

As an example of the Bard’s audacity, in Macbeth, the iconic cauldron is, according to Hunting’s analysis, a veiled reference to the actual chalice of the eucharist, that Jesus drank from during the Last Supper and which, Hunting says, was used to seal the promise of absolution from sin with all mankind.

This motif is also found in Hamlet where, in the final scene, the poisoned chalice prepared by Claudius brings his own downfall.

Hunting, who says that his research will require a “paradigm shift in thinking” to fully comprehend, added: “These teachings, though coming from Jesus, actually predate Christianity and can be traced back through a lineage of ancient spiritual masters beginning with Hermes Trismegistus.

“Up until now, no one has either dared to or been sufficiently attuned to those ancient teachings to recognise their presence also hidden in the works of Shakespeare.

“It seems obvious that Shakespeare was, himself, a spiritual master and therefore had the intuitive ability to see the hidden teachings of the Holy Grail encrypted within the Bible. His genius was in reimaging iconic scripture as iconic ‘Shakespeare’.

“He chose to share these teachings—which are timeless, spiritually uplifting and which unite peoples across all national boundaries—within his plays for the benefit of all humanity, which is particularly relevant now in a time of shared planetary crises.”

Shakespeare’s Holy Grail: The Ancient Secret Revealed  by Paul Hunting is out now, published by Bardass Books and available on Amazon, priced £19.99 in paperback. An eBook edition is set for release in late July 2022. For more information, visit www.paulhunting.com.