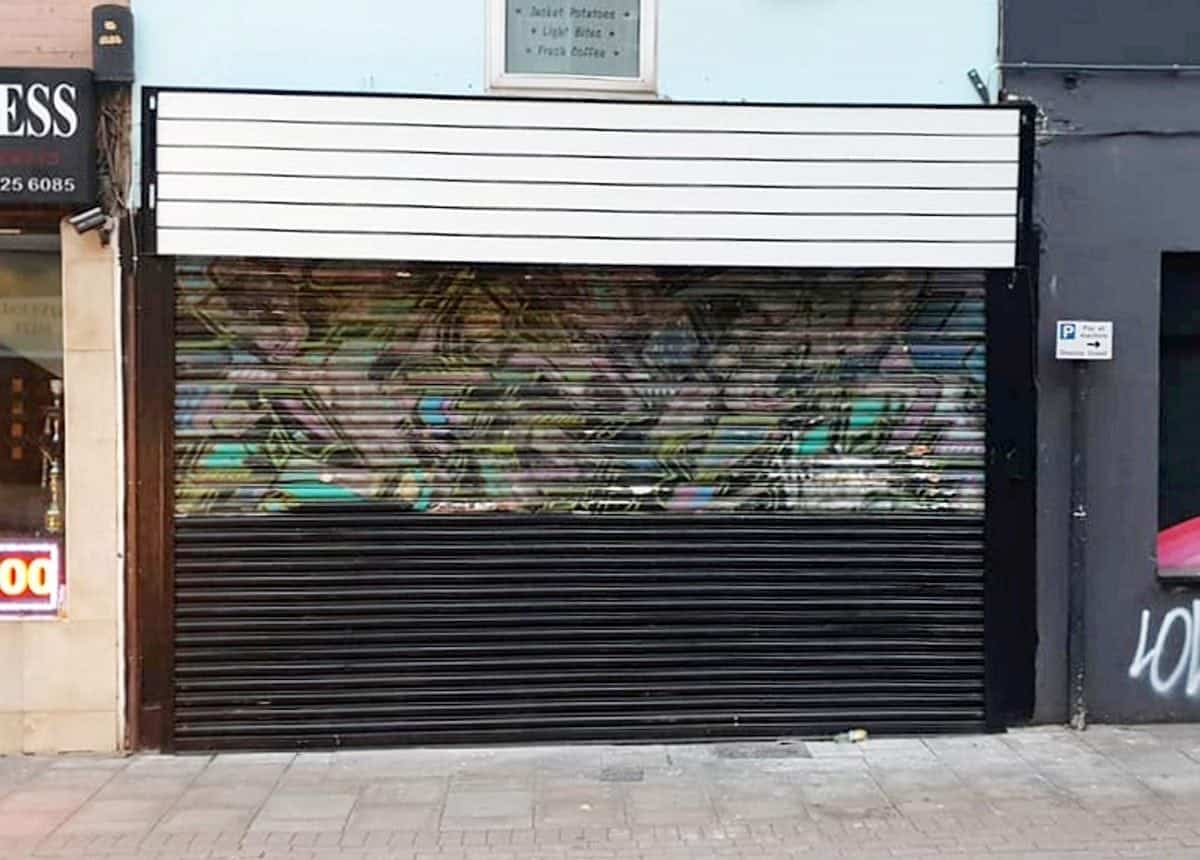 Street art fans were left horrified after an early Banksy mural was accidentally painted over by new shop owners.

Jo Xie and Tommy Yuen bought the premises in Bristol city centre earlier this year with plans of opening up a tea shop, on the former site of the Rollermania skate shop on Park Row.

As part of the renovations they had the shopfront shutters re-painted as they were covered with old graffiti. 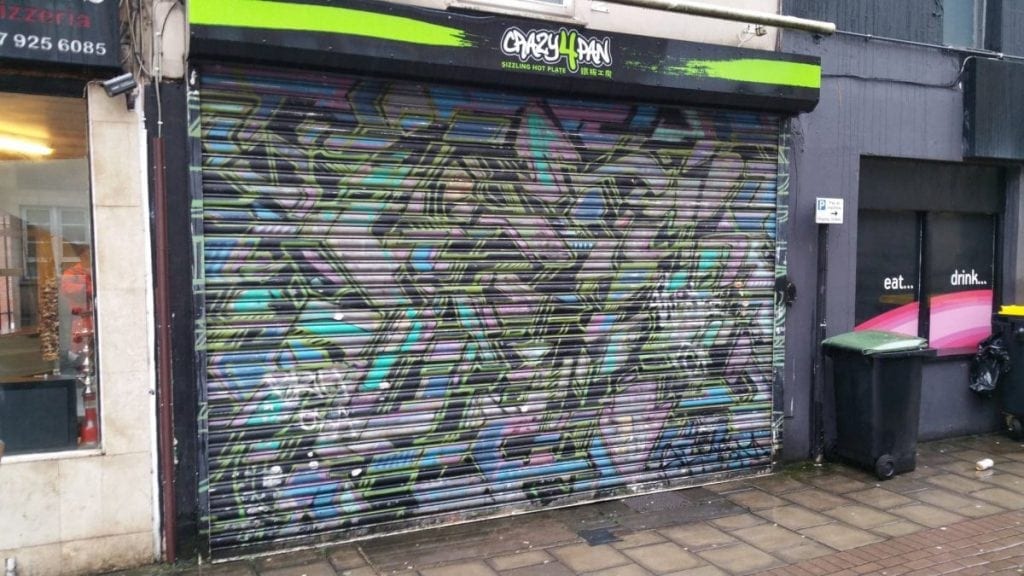 Mr Hamada, the workman hired to fit out the new tea shop, said he was mid-way through re-painting the shutters when he heard the shocking news.

“I came back saw a guy was standing there – he was really upset, like he was crying a bit.

“I came up to him and I said ‘what’s up? Did I do something wrong?’

“He told me it was by a famous artist, so I stopped everything and told the landlord.”

By that point, the bottom half of the mural – which is painted without stencils and dates from Banksy’s early days painting in the city in the late 80s and early 90s – had been painted black.

Tommy, one of the owners, admitted he had no idea he’d purchased a valuable artwork along with his new shop.

“We didn’t know. As soon as we found out we thought ‘Oh no! We’d better keep it.’ 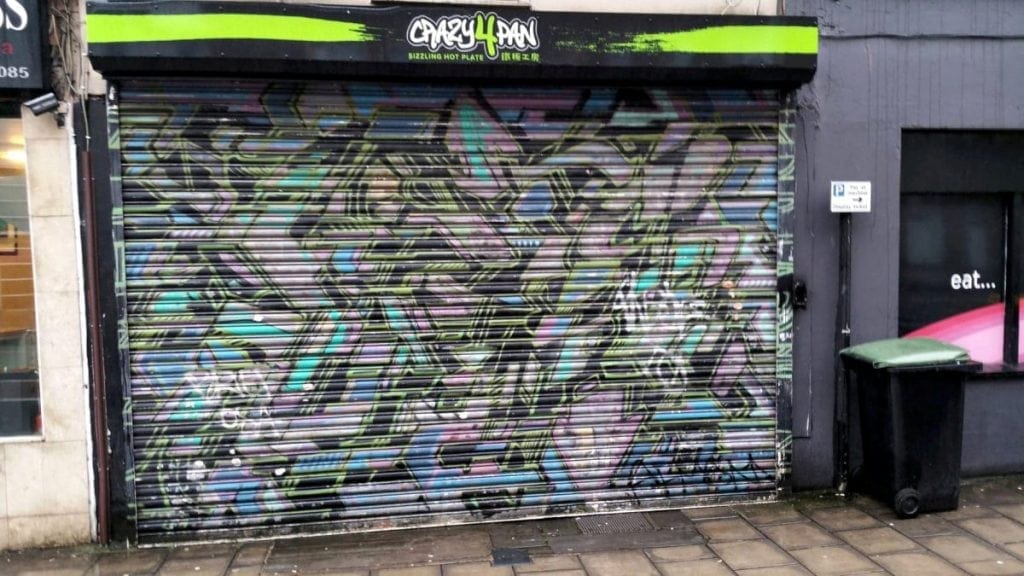 I actually didn’t believe it at first. I’ve lived in Bristol my whole life and I didn’t know this was a Banksy,” he said.

Banksy enthusiast Simon Whiteway posted a picture of the half-painted over mural on his Facebook saying: “One of Banksy’s original freehand murals on a shutter, circa 1999. Now getting painted over today.”

Alongside was a picture of the store from 2014 back when it was the Rollermania skate shop, with owners Tony and Louise Coffey outside.

“Tony told me Banksy used to come in and offer him original artwork in exchange for a few Stussy t-shirts, Tony refused,” Simon explained.

“Hindsight is a wonderful thing.”

Bristol graffiti legend Inkie, who grew up tagging the city streets with artists like Banksy, 3D and FLX confirmed it was the work of his fellow artist – but called this particular piece “pretty ugly”.

“Not one of his better works… this shutter was first painted by 3D in the late 80’s then by myself and FLX in the early nineties,” he said.

“I can confirm it was painted by Banksy as he painted over the one I did with FLX before it he did a pretty ugly job too.” 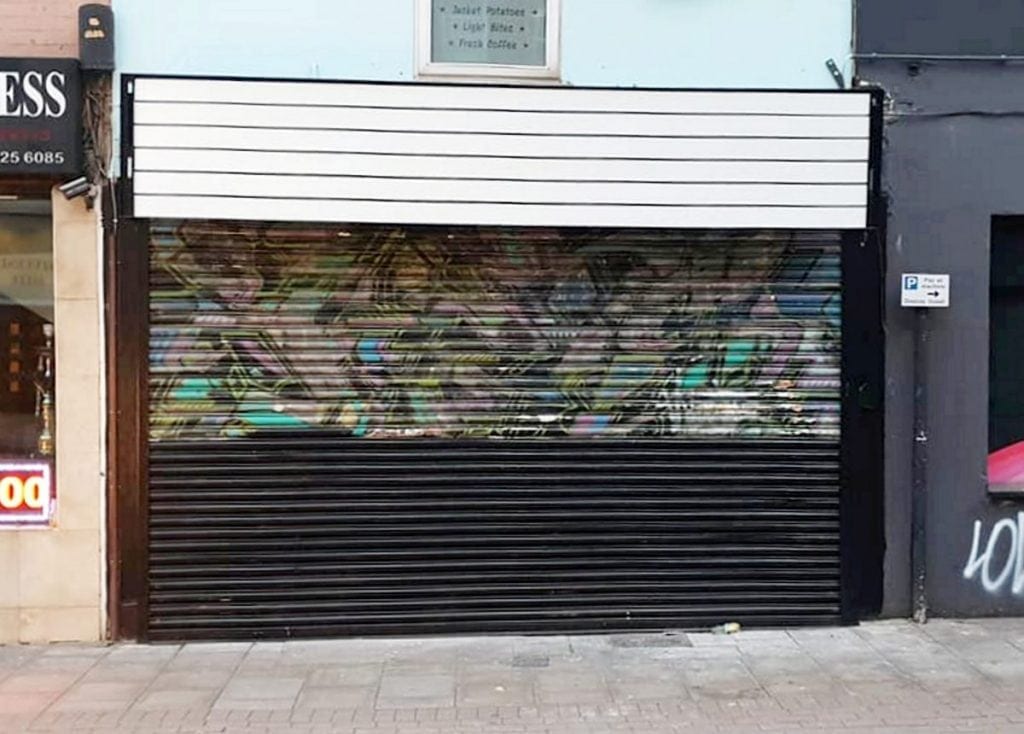 The shop’s new owner, Jo said: “It certainly doesn’t look like most of his other work”.

She also made an offer which should prove irresistible to any Bristol graffiti artist, you can now have your work appear alongside a genuine (if rather old) Banksy.

Jo said: “If anyone wants to contact us and come and fill in the bottom half that would be great.”