By Hubert O’Hearn and Bianca Da Silva This Belfast Book Festival has proven so far to be an absolute joy, with the only debate being what has been the most thought-provoking: Is it the discussions and readings in the various workshops, or the spontaneous chats in the Crescent Arts Centre happening over coffee? Writers in […] 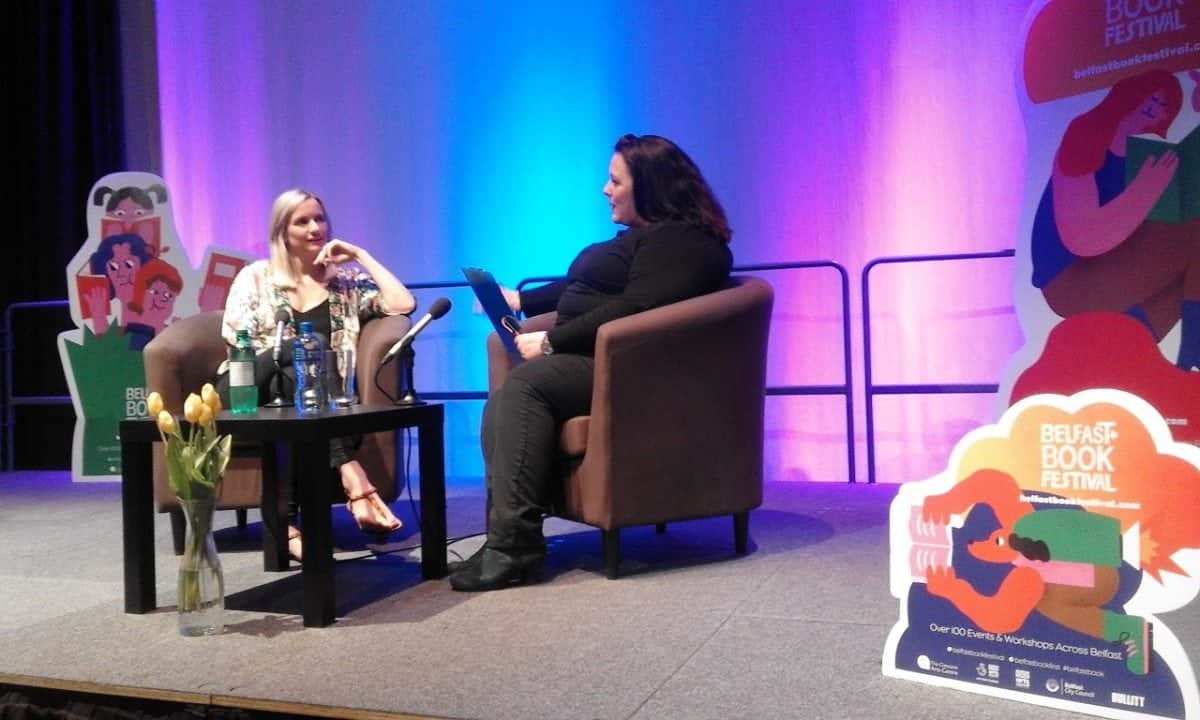 This Belfast Book Festival has proven so far to be an absolute joy, with the only debate being what has been the most thought-provoking: Is it the discussions and readings in the various workshops, or the spontaneous chats in the Crescent Arts Centre happening over coffee? Writers in their unique and splendid way are rather like zoo animals that one hears of escaping from captivity, gamboling through cities with literal unbounded glee. Release a writer from the self-enforced captivity of the lonely home workspace and everything she or he has been wanting to say for months comes out in floods. Or is that just me? (thinking) No, I’m sure I was listening and not talking for at least thirty or forty seconds.

There are two events to be reported on in this update. The first is the Literary Issues panel which featured two writers from each of three Irish literary journals: The Stinging Fly, The Tangerine, and Banshee. These are the professional proving grounds for the next wave of brilliant talent born or living on this moss-covered island. Each reader had a unique voice whether they worked in short fiction or poetry. I will say that among the group the writer I would point to as One to Look For is Annemarie Ní Churreáin. The Donegal poet writes with clear language that illuminates the dark beauty of simple tasks, simple scenes that form waves of considered insight into modern lives. <

Newborn 1984
for a Dublin mother

The first wrong thing
was this: an extra finger,
boneless and pointless.
The junior doctor said
as he looped a thread
around the infant part
and made a knot, wait
for the lot to fall away.

That was the season
Mary Manning refused
to pass an orange through
the check-out
at a Dunnes Stores desk.
A strike was declared,
apartheid made the news:
our battle is nothing
compared to theirs.

And all that summer
an unexpected heat
curled, like a bindweed
root around the city,
bulging and pulsing,
until even the swans
in the charcoal canal
appeared to be posing
the question –
when will it ever end?

In stores, the till drawers
lay open, oranges
sprouted fur
and Mary marched
down O’Connell Street
protesting the divide
of skin from skin
and bone as any less
than bone
as quietly,
beside a cot,
a new mother
still waiting
wept.

The second event was The Unmumsy Mum featuring the best-selling author Sarah Turner. Both Bianca Da Silva and I attended this event, however as I was one of three men in a room of one hundred and forty-seven women mine would be a distinctly minority view. To that end, here is Bianca’s take on the evening:

There’s no better way to describe my experience of the first few months of motherhood than the story of how my daughter came into the world. I had bought myself an entire outfit for the exciting event – the birth of my first child. It included a practical and comfortable maternity dress that came with those buttons down the sides that could be undone, allowing me to breastfeed, discretely, and with all the ease of a new mother taking effortlessly to the challenges of this fulfilling sisterhood. It was perfect, just like motherhood would be. I could not have been more prepared. I could not have been more blissfully unaware of how unprepared I really was. I was actually wearing a ratty, brown t-shirt with a whiskey advertisement splashed across the front when my baby girl came into the world. I won it in a competition at a club I attended in my early twenties and it was one of those cosy shirts I use to sleep in. I hadn’t planned on giving birth in it, I just hadn’t had time to change – she just came that quick – and I’ve been trying to catch up with her ever since.

The Northern Irish aren’t the most participatory of crowds. You won’t find them hooting and howling during performances but when Sarah Turner, the author of The Unmumsy Mum, speaks the mums in the audience come alive. It’s like Sarah is an old friend, sitting in their conservatories drinking a cup of tea and sharing stories that are intimate and yet universal. I hear them hmm hmm-ing in agreement, louder and louder, as if they want to get to their feet and start shouting “yes, that’s how I feel. How do you know?”

What is it about hearing stories from another mother about how wonderful and how awful motherhood can be? When my daughter was a few weeks old, I wasn’t getting more than two hours sleep in a stretch, and while the logical part of you knows that your child will grow and become more independent, another small part of you is scared, and tired, and there’s this voice telling you that this will last forever. Most of the time, you’re not even consciously aware of that voice. It exists somewhere between your child’s constant screaming, the silence of the washing machine as the dirty clothes begin to pile up and the grating sound of parents with grown children sleeping through the night telling you to “cherish” this time. It tells you that you’re the only one failing at this. No one would question my love for my daughter if they saw me with her. I adore everything about her. I adore that when she smiles, her nose wrinkles. I love the way she smells, like home. I even love her fiery temper because it’s a glimpse into her personality, her uniqueness as an individual.

But motherhood can often be a lonely experience and that’s what makes blogs and books like Sarah’s so important. She’s not telling us something we don’t already know, she’s just being honest about all the things we already know, that we never share with anyone but ourselves, at 3 o’clock in the morning when we’re covered in vomit, rocking a screaming baby to sleep and that voice is whispering “Really? You’re still struggling?”

Like her books, Sarah is warm and honest, and is willing to tell anyone who will listen that motherhood is as impossibly wonderful – and impossibly difficult – as you might imagine, and believe me, we are all listening.