Wyndham Hacket Pain @WyndhamHP John Berger, the author of many a book I have picked up in a bookshop only to put down again, has always looked like an intriguing and interesting figure, if albeit from afar. The highly regarded author, critic, and artist – who died earlier this year – has always seemed like […] 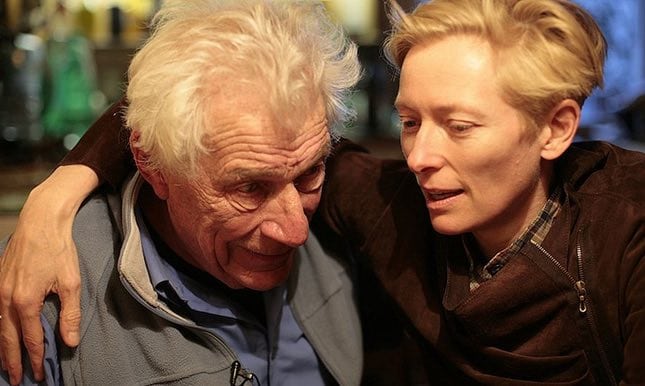 John Berger, the author of many a book I have picked up in a bookshop only to put down again, has always looked like an intriguing and interesting figure, if albeit from afar. The highly regarded author, critic, and artist – who died earlier this year – has always seemed like a charismatic and thoughtful character more than worthy of an affectionate documentary like the one that has been produced.

Consisting of four short films about the writer, The Seasons in Quincy examines the work and character of John Berger. The first short, directed by art critic Colin MaCabe, is perhaps the simplest and mainly consists of conversations between Berger and Tilda Swinton in his house in the French rural alpine village of Quincy. It is the most intimate of all the sections and gives genuine perspective on Berger as a person.

It is these qualities that the second piece, directed by Christopher Roth, lack. Due to the death of Berger’s wife he was not available for interview and in turn the film is created through archive footage, images of Quincy, and a voice over. Despite containing interesting elements the section lacks the charm and insight that Berger brought to the first.

Berger returns for final two films, directed by Bartek Dziadosz and Tilda Swinton, and the documentary regains its central focus. Whenever Berger is on screen there is always absorbing conversation and debate. Whether about his childhood or the current political landscape he always manages to bring insightful and stimulating commentary to whatever topic is discussed.

It is strange then, with Berger being such an engaging and energising figure, that overall he has relatively little screen time. The half an hour in which he is present is fascinating and compelling, while the remaining hour can be interesting but often feels surplus and unnecessary. This is particularly evident in the second section but can also be seen in the final film where a large portion of time is spent following Berger’s son and extended family. It is nice to see his son but I was left wondering if this time could have been better utilised.

For me I would have much rather have seen an extended interview with Berger, with only the odd intermission and diversion. The archive footage and the voice overs would have been an interesting addition, but are not enough to hold the documentary together on their own. Oddly in a film where he is meant to be the central figure, Berger can often feel peripheral and like a supporting character.

Ultimately The Seasons in Quincy, much like Berger’s drawings, is only a sketch of the person they are trying to depict. For long periods in the film Berger is elusive and out of sight, and in many ways this only adds to the curiosity I already had for the author. If this documentary succeeds on any level it is that maybe next time I pick up one of Berger’s books I may finally take it to the check-out.

The Seasons in Quincy is in cinemas from Friday 23rd June.