Hubert O’Hearn with Bianca da Silva We were somewhere around Belfast on the edge of the Mourne Mountains when the rains began to take hold. I remember saying something like “We’ll still be on time ; absolutely you should drive…” And suddenly there was a terrible roar all around us and the sky was full […] 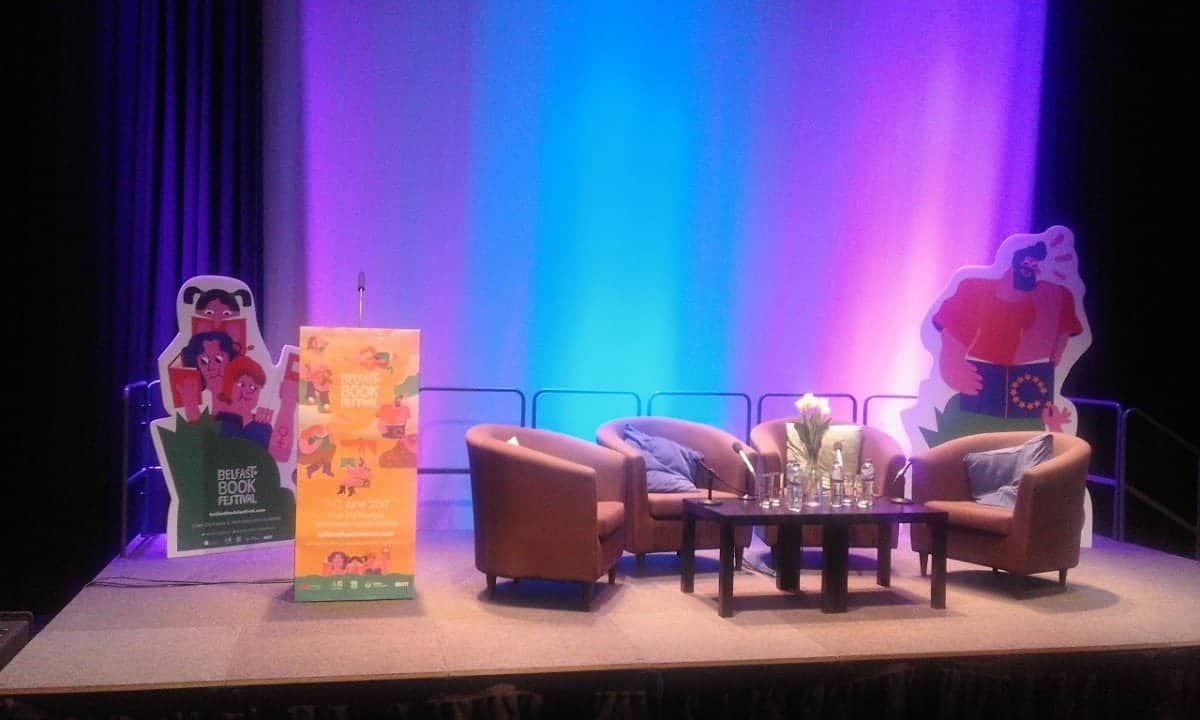 We were somewhere around Belfast on the edge of the Mourne Mountains when the rains began to take hold. I remember saying something like “We’ll still be on time ; absolutely you should drive…” And suddenly there was a terrible roar all around us and the sky was full of what looked like huge, bowler-hatted DUP drummers, all swooping and screeching and diving around the car, which was going about a hundred miles an hour with the top down to the Belfast Book Festival. And a voice was screaming: “Holy Jesus! What in hell has Theresa May done?”

There were deaths and there were many of them, most of the bodies, well you’ll never know their names. Savage brutality. That’s the only phrase that fits modern publishing. Savage brutality. The old shall eat the young and spit the bones hard into the eyes of any who object. Any writer today who does not come armed with at least six side weapons, with my advice that all should be of a caliber of 28 mm or above, as why shoot if not to kill; well he is as doomed as the unicorn late to Noah’s Ark. They – the crimson-faced and probably crimson-arsed –the They of the Irish Times or Independent reviews, they exist to destroy you just as surely as a wolf downs a dog’s dinner.

But, you know, killing all the critics is not a great option, although let’s hold onto it as an option. Because, well, ridding the Earth of evil is not a Bad Thing; never was, never will be. And yet, there is some truth to the idea which is why I arrived at the Belfast Book Festival with narrow eyes and a callous-shaved trigger finger. Be prepared for action; always be prepared for action.

And yet, you know, people were kind on this opening weekend. Oh I grant you, I was on my toes, even when they were curled under a table at The Woodworkers bar in Belfast. Even as writers lined up to buy me drinks – “Thank you for recognizing I accept bribes” – I was still ready to defend reviewers against the slings and arrows of outraged authors. Christ knows I wasn’t prepared to die for the opinions of the Irish Times or the Belfast Telegraph, but for my own stuff? Lock and load.

I had attended two workshops, one on Short Stories and one on Crime Writing and I’d enjoyed them both. Heck, I’ve always sympathized with short story writers, who are seen by the great ignoranti as ‘failed novelists.’ Nonsense. One may as well describe pop song writers – Paul McCartney, Elton John, Lindsay Buckingham et al – as failed symphony writers, and who does that? No one.

But, as Damien Rice sang, ‘And So it Is.’ June Caldwell, Nuala Ní Chonchúir , Jan Carson or Oisin Fagan are seen as practitioners of an art form somehow less than or aborted from the big landscapes of The Novelists. Yet, as came clear in listening to then discuss their art, if there is a gram less angst, thought, care ir craft in their shorter form than that demonstrated by Amis, McEwan or Barnes in theirs, I am yet to read or hear that proof.

An interesting side-note to the Short Story workshop was provided by one of the participants. I’d tell you who, but I’m not really into destroying people’s careers. This author discussed their frustration in dealing with the large, Big Five publishers’ editors as opposed to the smaller, cuddlier, Dermot Bulgerier, Irish publishers. The former are corporate – ‘this is what the Big Thing Now is; you will write in accordance to Big Thing Now!’ I apologized profusely. No really, I did. As one of the few (only?) Canadian editors to have ever emigrated to our small and cuddly, moss-covered island, I bear a natural Canadian guilt to apologize for … anything that might come along.

Similar apologies were necessary for being a (checks inside trousers) a man. The Crime and Mystery panel, featuring Louise Phillips (and old friend who I finally met face-to-face), Julie Parsons and Stuart Neville, as two out of the three were women, guess what was the first and last question they faced? I condense: ‘How do you gals manage to write about guys or nasty things if you’re girls?’ I suspect Stuart Neville may have been wistfully wishing he was at a pool room and three pints in, but I can’t be sure of that. The women though, well, Louise Phillips had the best answer. “How difficult is it to write a male character? Just as difficult as it is to write anything else.” I saw Michael Jordan in his prime take the ball to the basket. Michael Jordan never dunked as efficently as Louise Phillips.

It is, in one way or another, all bullshit, this notion that a panel composed of anyone or any scoop of everyone will somehow unlock the secrets of great writing to the effect that everyone in the room will have their ‘Aha!’ moment and all of a sudden Ireland is spitting out fresh versions of Anton Chekhov like an Arkansas watermelon farmer spits watermelon seeds. P’ting. DING! Life don’t work that way.

In fact, the best piece of wisdom I took away from these first two days of the festival was supplied by Julie Parsons. She said that for a writer, a serious writer, ‘D equals desire.’ True. It’s not about desperation, definition or delinquency – all of which are characteristics writers have been described (or self-described ) as. We do this shit because this is the shot we love to do. No more, no less.

Now then, if you’ll excuse me, there is a Tyrannosaurus Rex lurking at my bedroom window and I think it requires my attention. There is a strong possibility this green-scaled monster is imaginary, but! One thing you learn from hanging out with writers is – imaginary is as real as anything. If you describe it well, the audience will believe you.

Allons, marchand, allons-y! More to come … unless the dinosaurs eat me.