“Life is a sexually transmitted disease and the mortality rate is 100%” said R D Laing. He also said “Madness need not be all breakdown. It may also be a breakthrough.” Alice Birch seems to explore these not quite perfect opposite attitudes to mental ill health in her new play Anatomy of a Suicide. During […] 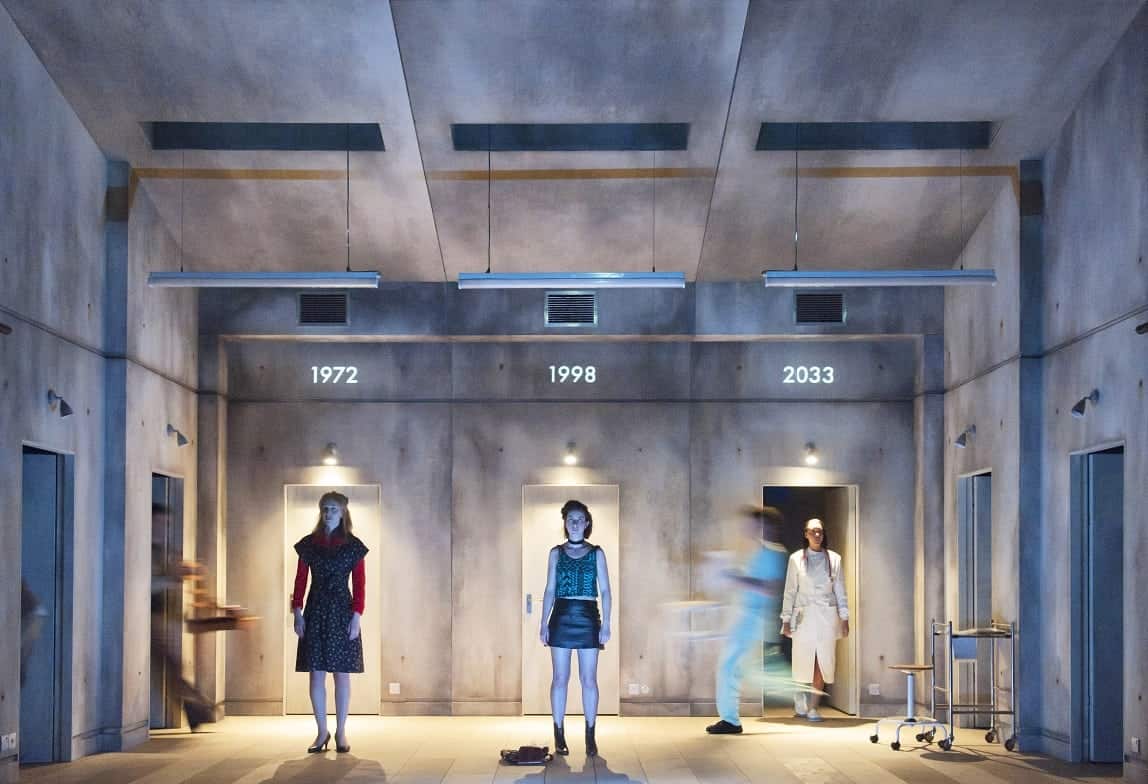 “Life is a sexually transmitted disease and the mortality rate is 100%” said R D Laing. He also said “Madness need not be all breakdown. It may also be a breakthrough.” Alice Birch seems to explore these not quite perfect opposite attitudes to mental ill health in her new play Anatomy of a Suicide.

During two hours of relentless dialogue and repetitions of life cycles we see three generations of women lurch back and forth between a kind of sanity and suicidal depression before one of them seemingly finds some sort of resolution.

It is a massive attempt by Birch and director Katie Mitchell to paint a picture of clarity over a much misunderstood subject.

Death much more than life haunts the stage complimented by Alex Eales’ stark morgue like set (the stage directions describe a hospital, but this is more morgue in feel). Three tall white doors are set in a white back wall through which the actors glide in slow-motion as if bodies being pulled slowly out of a morgue freezer.

The three protagonists collect on stage in a triptych of despair: mother Carol (a cool sharp Hattie Morahan), her daughter Anna (Kate O’Flynn on fire) and Anna’s daughter Bonnie (sensitively played by Adelle Leonce). They are dressed and undressed as if models or dolls on display.

Through almost syncopated dialogue we learn that Carol passes on the spectre of suicide to Anna who passes it on to Bonnie. None of the women can find freedom from it. Quick fire repeated sentences, repeated questions within the life situations each woman finds herself in enforces the idea that the tendency to be depressed and commit suicide might be genetic.

Witnessing the dialogue is like listening to Stockhausen or watching a hyper unrealistic Rainer Werner Fassbinder film. Physically acting like mirrors to each other onstage (and going through the same life rituals- parties, relationships, therapists, hospitals etc. (Mitchell creates beautiful images, all worthy of the kind of hypnotic imagery we are used to in Lynne Ramsey’s early films)) the women’s voices come together in a great chorus of lament and sometimes bitterness.

At these moments nothing is intelligible, at others, when the voices unite over a common word (“help” for example) it is as if all women who have committed suicide or are locked into suicide ideation (which Bonnie fears) speak as one.

Not until the end of the play does Birch and Mitchell try to make sense of it through the youngest woman Bonnie. Up until this moment the women’s depression and suicide ideation could be a result of many oppressive and ambiguous forces: the societal demands of the time, attitudes towards women, oppressed sexuality, humanity’s relentless conformity to social norms, female powerlessness coupled with male dominance and authoritarianism (one scene with a male psychiatrist is terrifying).

The women are caught within society’s and their own self imposed ideologies.

But towards the close we are steered like a ship rocking in a storm into a port we never knew existed. Some resolution is found like the sun breaking unexpectedly through dark clouds.

This moment, a moment of enlightenment for Bonnie, reminds me of a moment in a play I always seem to refer to: Loomis’ breakdown in Joe Turners Come and Gone (August Wilson). Loomis, still mentally shackled from his time as a slave in the Deep South, finds some sort of redemption when he emotionally collapses in front of his adopted community. A block is removed.

So here too, except that the block being removed is only witnessed by the audience and by Bonnie herself- there is no sense, as in Wilson’s play, of reaching out to other characters and having the pain witnessed by them. How much one needs a witness to one’s own pain in order to really heal is in contention.

It is not through the power of performance and playing a role that these women can be healed (as Loomis was doing if only in the context of the other characters) as it is the roles that they play that are killing them. It’s got to happen internally and kept inside.

Can it really be that easy to remove a block, an illness that has been carried down the generations from mother to daughter? But then why not? It is a choice the audience have to make: some will enjoy the resolution, others may prefer not to be given answers.

Birch and Mitchell are successful at portraying the inner dark tormented and desperate worlds that suicidal depression can fling a person into. The women are not victimised, nor do they feel sorry for themselves.

There might be too many themes and ideas that don’t quite get aired: the differing attitudes to mental health and women over the ages, suppressed lesbianism, abusive male behaviour, but the play makes you work hard. You cannot afford a lapse of concentration.

It is impossible not to compare Anatomy of a Suicide with Sarah Kane’s Psychosis 4.48 which premiered at the Royal Court Upstairs nearly 17 years to the day. Since then there have been other productions with Lyn Gardner memorably writing (at least for me) that it is “a manifesto for the living by one about to die” (Kane committed suicide in 1999 shortly after writing the play).

This seems less an answer to 4:48 as carrying on the conversation about mental health seventeen years later. Anatomy is a complex manifesto for the nearly dead by the living. Unlike Kane’s structurally disparate and numerous voiced 4.48, Anatomy of a Suicide manages not to topple into the abyss and attempts to link the internal self with a sense of a future that is gleamed through break down and a breakthrough.

Like Kane, it  also carries on the tradition of not romanticising female mental health and suicide in order to make it palatable.  This prevents audiences from indulging in psychological pain without end or answer: a person can totally invest, but still feel as if there is a future and a different way of looking at things too. Anatomy is creating new ground plays about such issues can stand upon.

On at the Royal Court until 8th July.