After rising like a phoenix from the flames of the fire that devastated the beautiful former council building, the cool South London cultural hub of the Battersea Arts Centre continues to dazzle, bringing London’s unique untold stories to the stage. And Conrad Murray is certainly unique – nimbly looping and live mixing beatbox, guitar and rapping about his […] 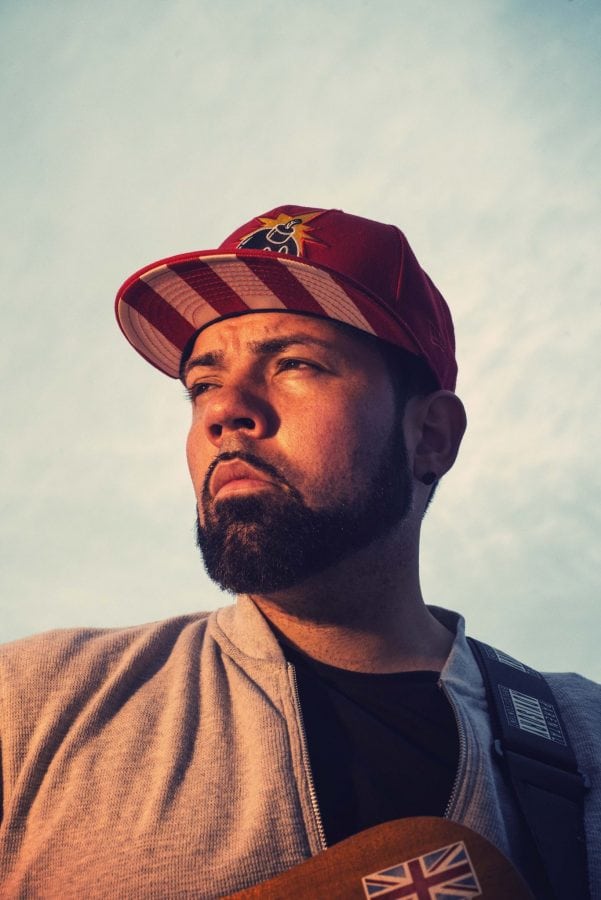 After rising like a phoenix from the flames of the fire that devastated the beautiful former council building, the cool South London cultural hub of the Battersea Arts Centre continues to dazzle, bringing London’s unique untold stories to the stage.

And Conrad Murray is certainly unique – nimbly looping and live mixing beatbox, guitar and rapping about his own extraordinary childhood, while sampling lines from Hamlet, Murray’s autobiographical one man show is as courageous as they come.

For a one man show it is much more theatrical than you would imagine, deft lighting and staging help concentrate on the vivid images Murray creates of rolling with the punches in a tough council estate childhood for him and his brother Barry.

Denmarked is a gripping 70 minutes of searingly honest stories of violent incidents, abuse, neglect, enduring racism and fighting the temptations of crime. All mashed up in Murray’s unique style with rapping, song and sampling quotes from Shakespeare’s play about the Prince of Denmark.

Murray recounts how at a young age his childhood was turned upside down by horrifyingly violent events involving his Asian father from whom he was then separated for a very long time.

Murray is haunted by a recurring dream that he too will follow in his father’s footsteps and end in a jail cell. And at points he appears to be heading that way too. But hiphop and beatboxing offer Murray a route out of deprivation and a life of crime he feels impelled towards.

There is no sorrow or pity in the telling of his story. Humour, and triumph emerge from Murray’s unique style of story telling and musical dexterity.  His live beatboxing and singing add to the drama, along with the sampling of Hamlet, a book a kindly teacher who sees potential in Murray gives him as a teenager, opening Murray to a world of words that fascinates him.

And Murray finds a kindred spirit in Hamlet, his abandonment, troubled parental relationships and trying to transcend a path they seem fated to tread. Denmarked discusses the realisation that we all create our own personal prisons, recounting the Danish prince’s conversation with his childhood friend Rosencrantz.

Hamlet views his kingdom, the whole world a prison, but concedes “there is nothing either good or bad, but thinking makes it so. To me it is a prison.” So his friend offers him the encouragement: “Why then, your ambition makes it one. ‘Tis too narrow for your mind.”

Murray’s bold show recounts his journey to surpass the racism, violence and crime of his childhood, and make a name for himself with hiphop and beatbox, which he now teaches youths at the acclaimed BAC Beatbox Academy, part of Battersea Arts Centre’s homegrown youth programmes.

In the BAC bar after, Murray revealed he is working on another very audacious show he is preparing with a dozen youth from his beatboxing workshop – a beatbox Frankenstein set to debut at the BAC before heading to Latitude Festival and Edinburgh.

And Murray explained how grateful he is that the BAC is committed to bringing voices such as his, voices from all kinds of background to the London stage:

“If you go to the National Theatre you will see privately educated people from a certain class putting on shows about topics such as people going through the care system and everyone’s like ‘isn’t it great that they are telling such stories and giving these people a voice.’

“But you are telling their story for them. I went through that system and it’s places like the BAC that champions people like me telling our own story ourselves.”

Denmarked  is at the BAC until March 11, along with Fire In The Machine  a youthful show combining theatre, karaoke and comedy by Sounds Like Chaos – a group of young people aged 13 to 21 from South East London.