Judges of the Wild World picture competition, run by the Society of International Nature and Wildlife Photographers, had to sift through hundreds of entries from all over the world 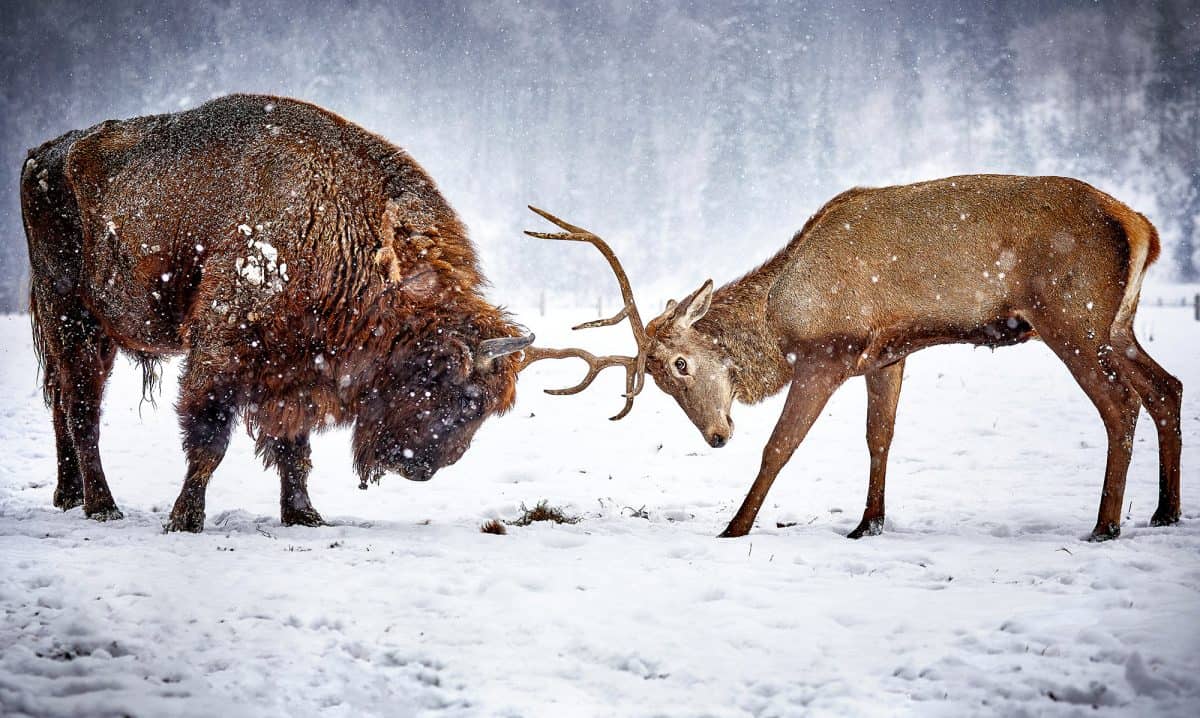 A tense standoff between a bison and a stag in a snowy Romanian forest was among the amazing pictures shortlisted for an international photo prize.

Judges of the Wild World picture competition, run by the Society of International Nature and Wildlife Photographers, had to sift through hundreds of entries from all over the world.

Snapper Diana Buzoianu, a Romanian living in London, took the picture of the snowy standoff during a visit to Buzau forest in her homeland.

Diana, 43, said: “I was thrilled to be able to see these majestic animals whilst travelling in Romania.

“With a well-equipped car for extreme weather conditions we decided to sleep in the wilderness and in doing so to see the unprecedented beauty of some of my motherland.

“After a cold night at -11 degrees our morning was blessed with a fresh snowfall: a perfect weather for photography.

“The bison was trying to get food off the deer.

“Although just a little banter, the expression and the intensity of their gazes at each other was something worth watching.

“It looked like a male training or a bit of show off in front of their females.”

Buzau forest holds 23 bison in a special reserve set up ten years ago with Romania housing three others.

But that picture was only the runner-up, with the winner taken by Des Glynn, of Claregalway, Ireland, proving you don’t have to travel far to capture nature. 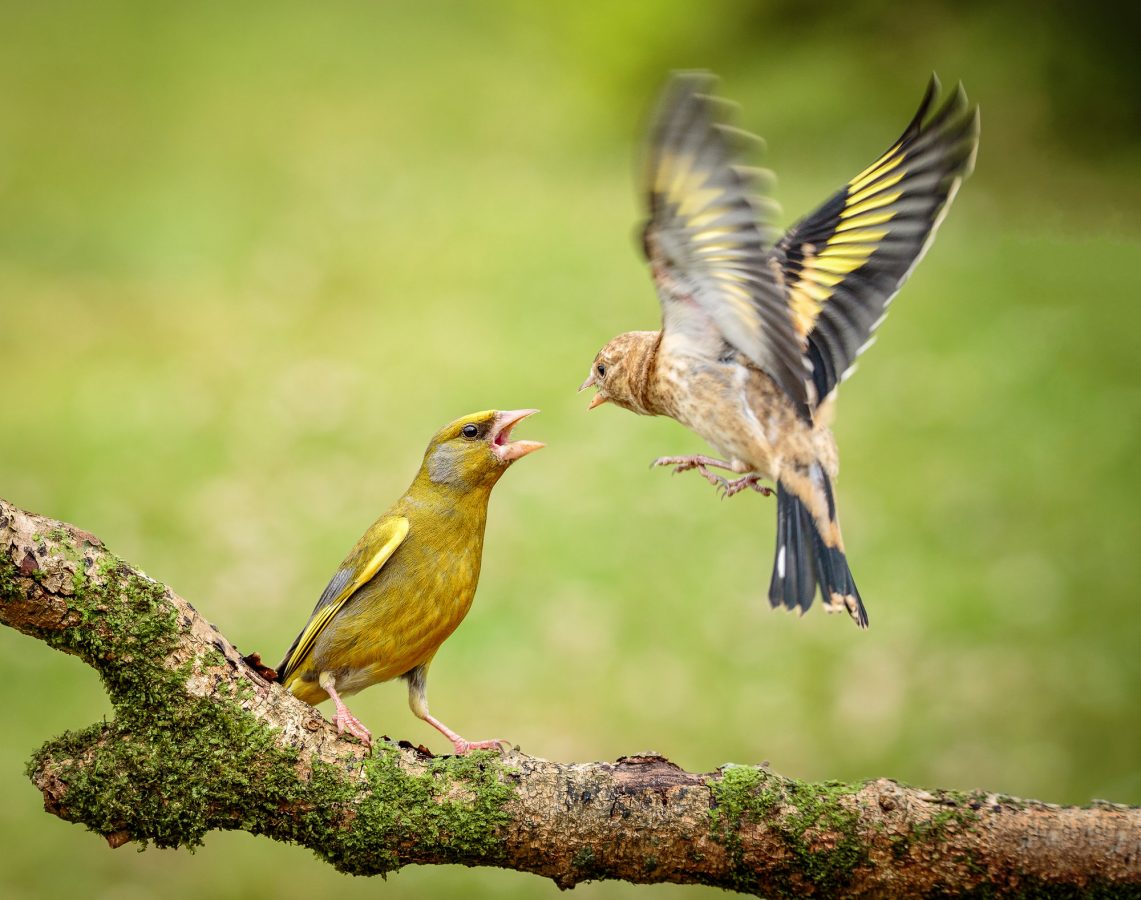 Des, 53 who works as a lab assistant took the winning shot of finches fighting in his garden.

He said: “This Image was taken in my back garden where I have set up some bird feeders which allows me to get great shots of these beautiful little birds.

“Greenfinches did not like any other birds getting in the way to getting a peanut and would fight them off.

“This gave me the opportunity to capture this image of the fighting finches.”

“The image has great composition and is superbly sharp for such a dramatic moment.” 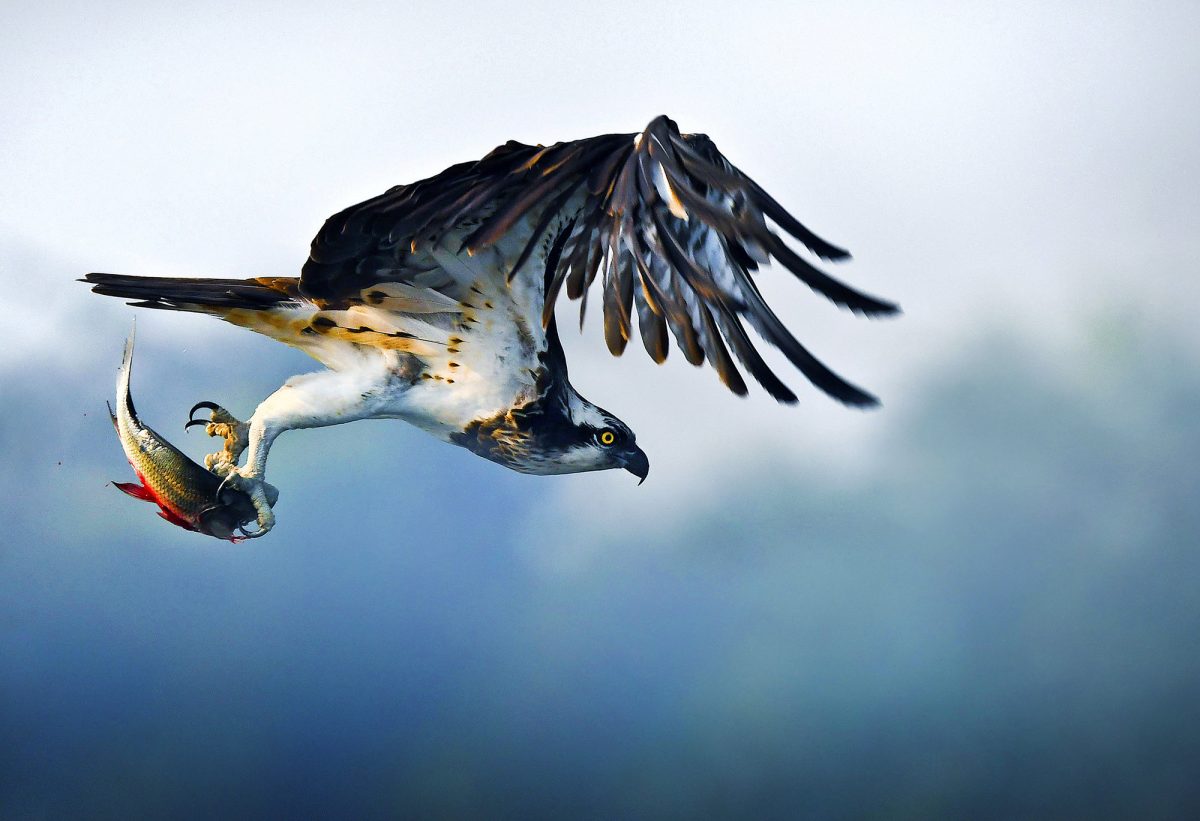 In third place was an osprey with its kill, taken in the wetland of Purbasthali in West Bengal, India, by Pranab Basak.

Pranab, a 47 year old amateur photographer, said: “The Osprey is a very clever and fast hunter of fish.

“After catching the fish , they tear off the head and fly to a safe area to feed.” 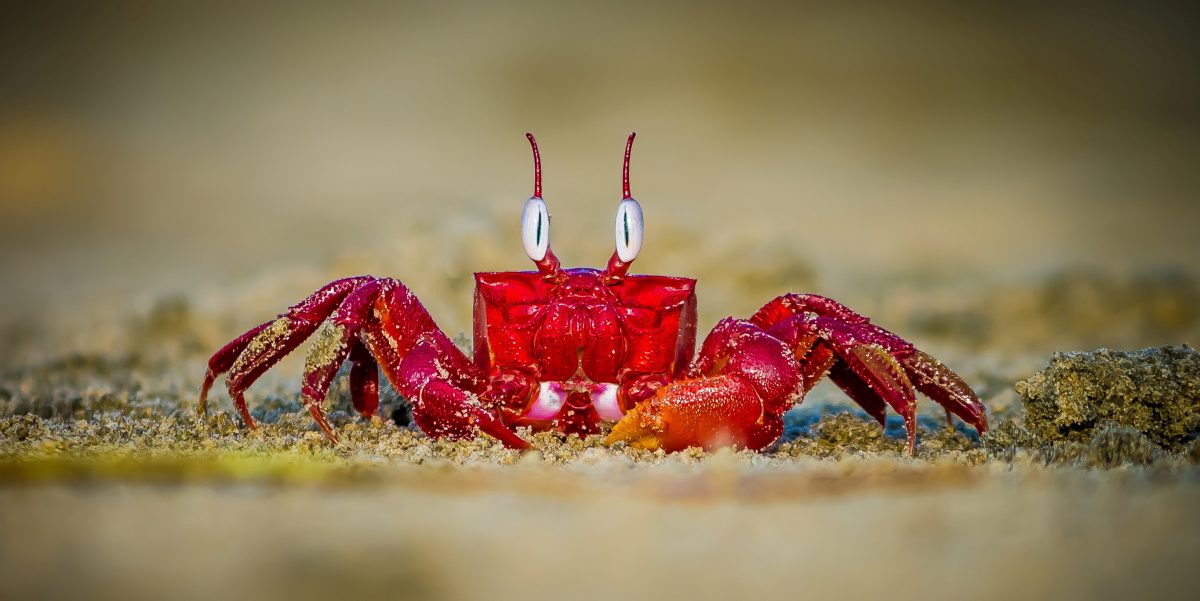 Staying in west Bengal, this eye-raising picture of a Red Ghost Crab was taken on Tajpur beach in West Bengal by Achintya Adhikari from Kolkata.

To get the highly commended shot, Achintya, 31, had to lie in the wet sand for two hours and balance the camera on his hat to keep it dry.

“Any vibration in terms of walking or roaming around can cause this crab to run inside its den.

“For this two hours, I was lying down on the seashore with full wet dress and had to place the camera just on a hat so hat it wouldn’t get wet.” 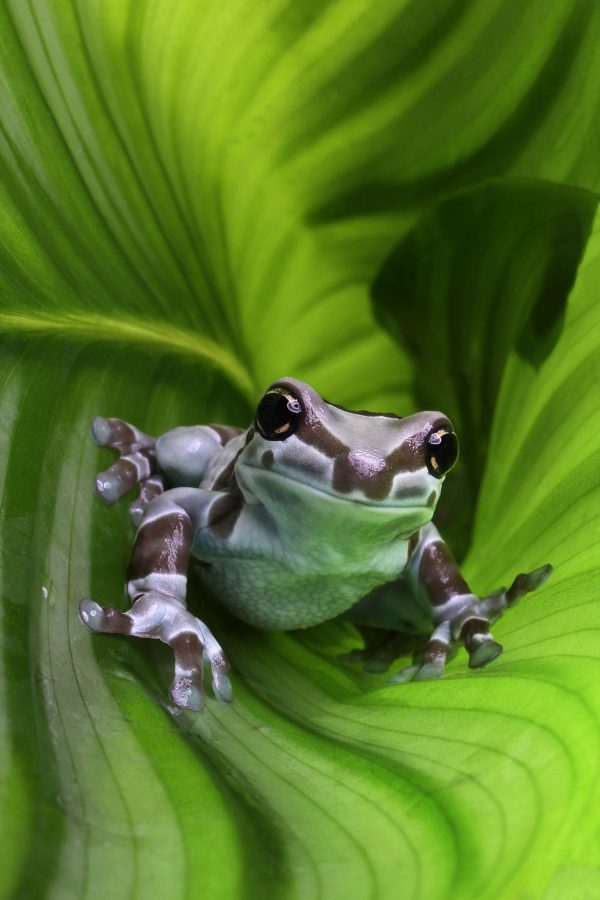 And this exotic-looking shot of an Amazon Milk Frog, which was also highly commended, was actually taken in the photographer’s home in Newcastle Upon Tyne.

Angie, 50, said: “This image was actually taken in my home. Due to chronic illness I cannot get out to photograph wildlife as much as some photographers.

“I have kept frogs as pets for almost 20 years, so I create different set ups to photograph them in – some naturalistic and some not.

“This one was a whole lot harder than it might appear, trying to get the leaf rolled up as required with the lines and composition as I wanted it and getting it to stay in place whilst waiting for a frog to decide to turn the right direction.

“I also had to back light the leaf so that it appears as if sun is shining through it and lighting from the front too. With such a tiny scale it can be tricky and fiddly, then its just pure luck if the frog sits within it in an appealing way.” 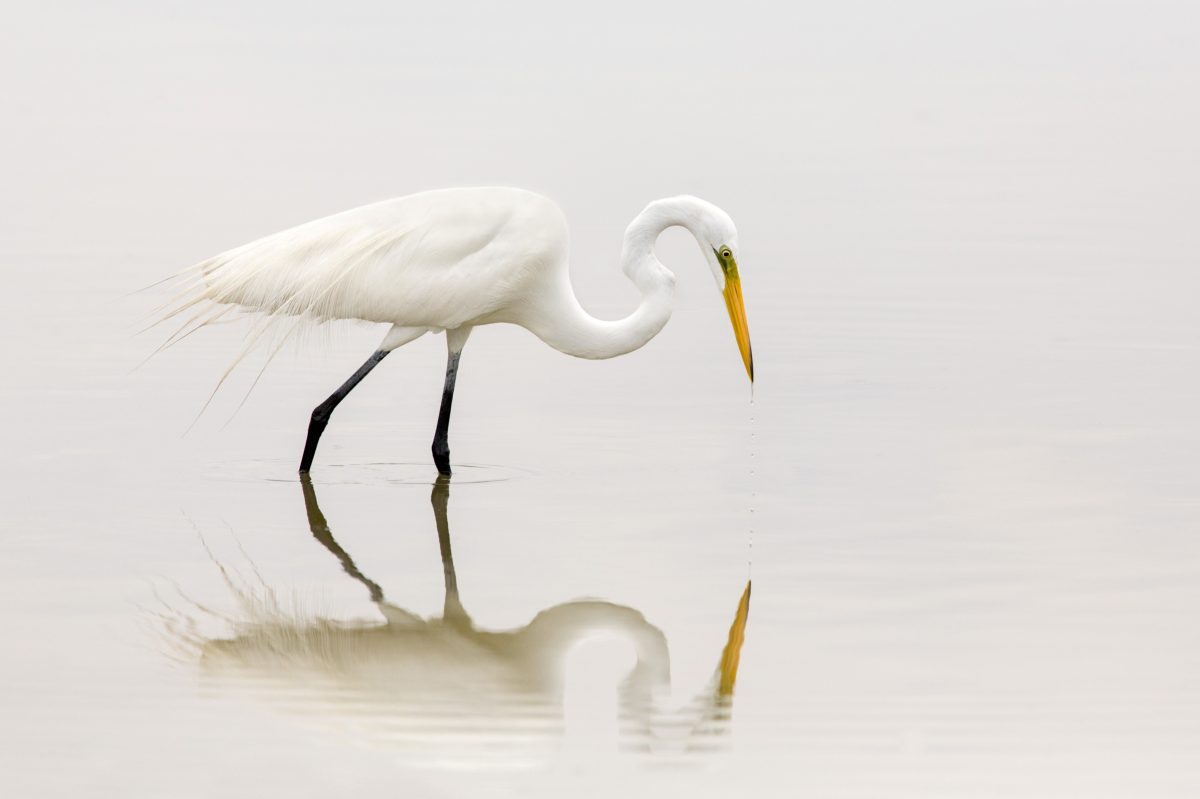 Another highly commended shot was this portrait of an egret feeding in Florida, by Brit Ann Aveyard from Hampshire.

The professional wedding photographer said: “It was taken on a beach called Estero on the Gulf coast. It is a great egret, taken early morning, the sky was overcast hence the soft light.

“I was watching the egret looking for fish and I wanted to capture the elegance of the bird. I loved the reflection and the elegant simplicity of the shot.” 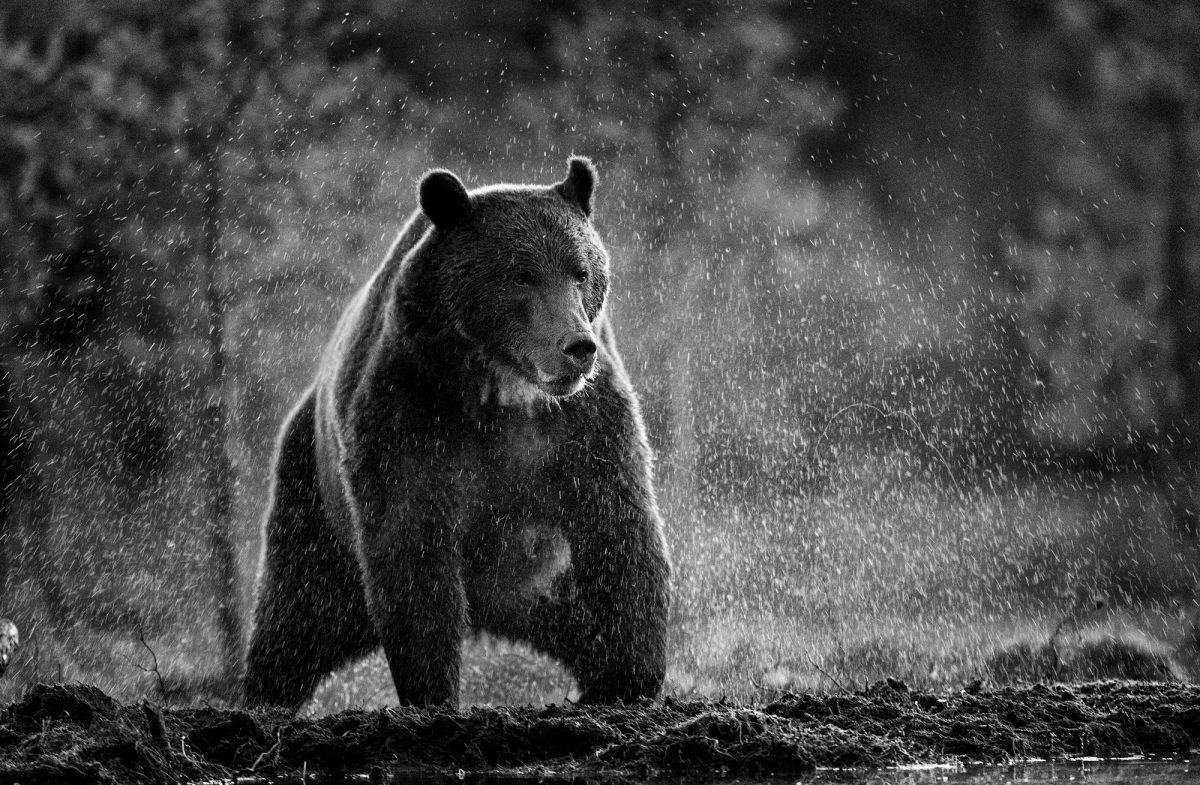 This dramatic snap of a bear shaking itself dry was taken in Finland near the Russian border by Norwegian Bjørn Stuedal who lives near Oslo.

The 52 year old, in marketing and PR, said: “The image was taken from a small photo hide seconds after the bear got out of the water after a swim in a pond.

“It was in September, late in the evening, just after sunset with very little light. I stayed in a small hide, dubbed the suicide hide by locals as it was made of thin plywood, from early evening until the next day.

“There were a total of five bears in the marsh around me all night, and also a pack of wolves near by.

“During the night, I could hear the bears stamping around me, at times as close as two to four metres, and also the wolves cry in the night. It was a fantastic experience.” 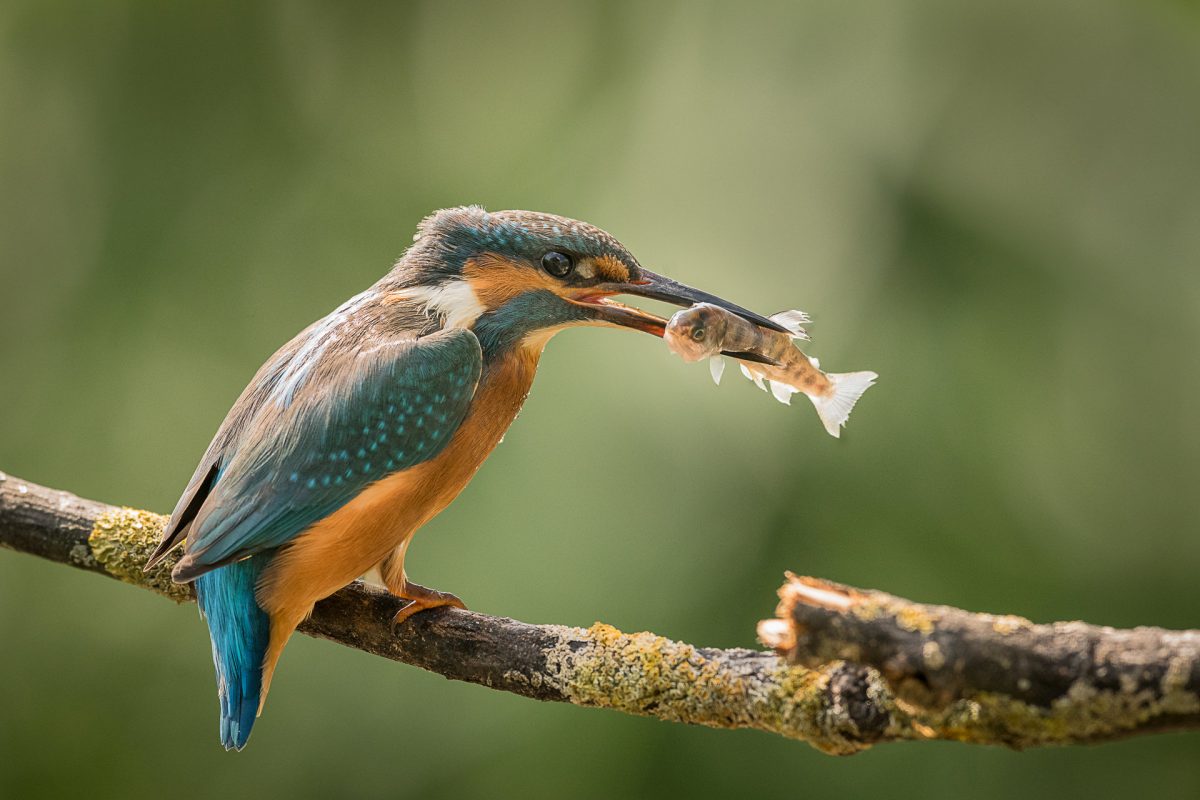 Slightly smaller but no less dramatic was this kingfisher with its catch, photographed by Mark Ellis from Aylsham in Norfolk. 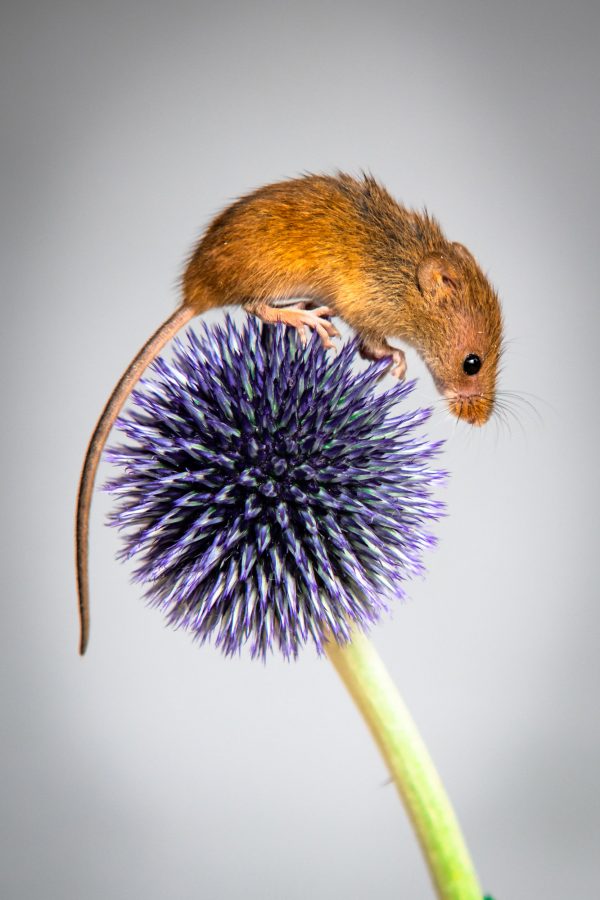 And also highly commended was this adorable shot of a harvest mouse as it crawled over a thistle flower.

Snapper Mark Slater who works for the Conservation Volunteers is based at Potteric Carr nature reserve in Doncaster.

He said: “The image was taken as part of a wider project on Harvest Mice. Due to loss of habitat they are becoming increasingly rare, as most of our natural species sadly are.”