This amazing set of pictures shows the iconic kingfisher’s dive for food in a Suffolk river. It is the result of hundreds of attempts by wildlife snapper Vince Burton to capture what to the naked eye is a flash of blue and orange followed by a splash. Vince, 40, has spent thousands of hours observing […] 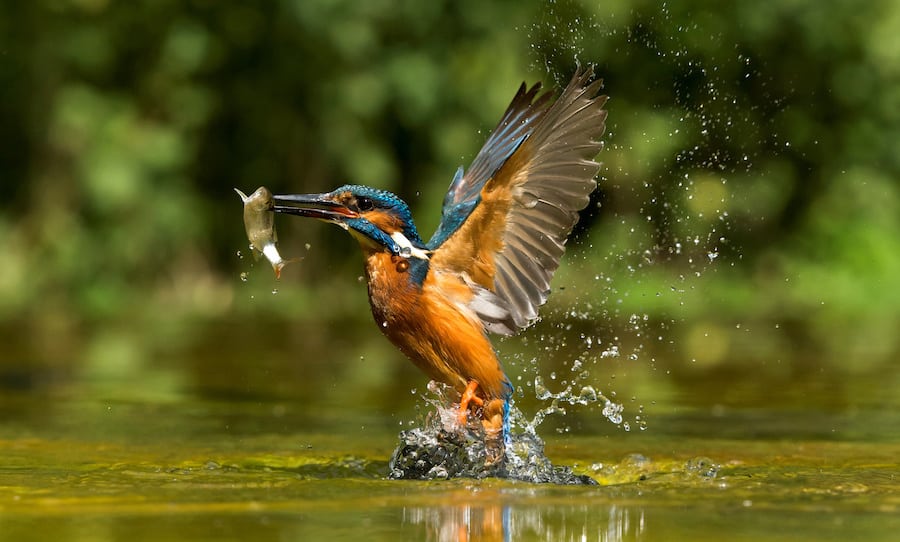 This amazing set of pictures shows the iconic kingfisher’s dive for food in a Suffolk river.

It is the result of hundreds of attempts by wildlife snapper Vince Burton to capture what to the naked eye is a flash of blue and orange followed by a splash.

Vince, 40, has spent thousands of hours observing kingfishers in the wild attempting to photograph the entire dive sequence.

And after years of trying, he has managed the perfect shoot.

Vince, from Norfolk, said: “Kingfishers are one of my favourite subjects to photograph. I shall never grow tired of watching these birds.

“As for time spent watching them, I’ve lost count, however these images were taken last weekend on a private stretch of river in Suffolk.

“I have been attempting to get these diving shots on many, many occasions, and after hundreds if not thousands of hours, this was the closest I have got yet to a sequence of diving shots, showing the agility of this bird.

“Many things have to come together to gain these images, but in particular the light as the bird is moving so fast.

“I set up two cameras at a spot regularly visited by a kingfisher in an attempt to capture the two ends of the dive of the bird, the start and the end.

“Normally the bird is so fast, the naked eye cannot determine the twisting and turning that the bird performs as it adjusts to its moving target in the water.

“Tom Daley would be truly envious of the manoeuvrability and the speed at which the kingfisher dives.”

The bird is found across the UK, apart from northern Scotland and the estimated breeding pairs are around 4,500.

Vince added: “The kingfisher is one of the UK’s most brilliantly coloured birds.

“Not much larger than a sparrow, the deep orange of the underparts contrasts beautifully with the greenish blue of the folded wings.

“A kingfisher has a second, almost indescribable electric blue. It is this blue along its back which is often your first sight of the bird as it flashes like lightning down the river.”

But despite the pictures, Vince thinks he can get even better.

He said: “This sequence has taken years to obtain with many hundreds of hours sat patiently in hides.

“Usually something always goes wrong, but this at least is what I was after. However I shall continue to photograph these birds and try and better my results.”