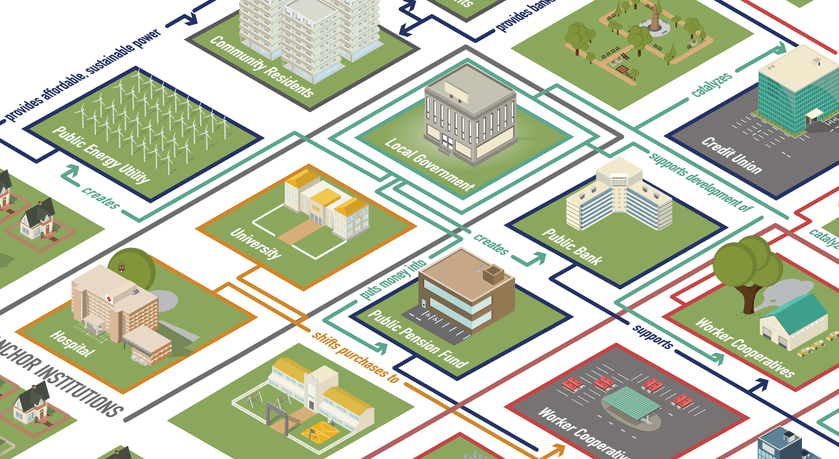 Labour has been out of government for over nine years now and the effects of austerity have had a torrid impact on society. But as socialists we are wrong to believe that change can only be perpetrated from Westminster.

Socialism is not just a set of policies to be enacted by our central government, it is a systemic change to our political economy.

The only way to do this is build the co-operative economy, promoting co-operative, worker-owned companies, and mutuals using councils and regional government.

Labour has a commitment in its manifesto to double the co-operative economy in the UK but it is local government building municipal socialism that holds the keys to a socialist economy, not Westminster.

Preston Council has been proving over the last few years that promoting co-operatives will not only further ideological goals but also rapidly improve local economies and communities.

The struggling northern town turned “most improved city in the UK” has shown revolutionary growth since the model has been enacted.

The Preston model added £200 million to the city’s economy while significantly reducing unemployment. It has proved the antidote from the suffering of austerity.

Promoting the growth of a co-operative economy

The economic model works by trying to promote the growth of a co-operative economy by identifying ‘anchor institutions’ – large institutions like schools and hospitals which lots of money flow through – and getting these institutions to change their suppliers to local co-operatives and other local small businesses.

This creates a new economy that keeps money local and in the hands of the people who will spend it locally too.

With wealth that would normally be vacuumed to the top staying in the local economy, the city has seen impressive growth.

Co-operatives are more efficient than corporations and may hold the key to the country’s productivity problem. By using them Preston’s economy has become fairer and more productive, while keeping money in the local economy.

While the Preston Model needs government action to get going, it creates a sustainable socialist economy that cannot be simply overturned by legislation.

If all Labour councils were to follow Preston’s impressive example the co-operative economy would grow rapidly, building the first blocks in a socialist economy, without Westminster being involved.

That is not to say gaining control of the central government is pointless, far from it.

Only a Labour budget can end the hardship of austerity and deliver rising living standards to the working class but we should not deceive ourselves into thinking after five years in Westminster the UK will be socialist.

However, Westminster has a number of roles to play in helping the democratisation of the economy. Labour has some positive reforms, backing co-determination, putting worker representatives on the board of directors of large companies and, more excitingly, they also support “inclusive ownership funds”, a way of channelling profits into worker ownership.

Both will help create an economy that is more worker run and move big companies towards being worker run too.

Other legislative changes like the ‘macora law’ can also help companies evolve into co-operatives, and the Italian co-operative sector is the place to look for inspiration. But overall the legislation needs improving and institutional support, may that be from local or central government needs improving.

And progressive reforms can also contribute.

The main hurdle in starting a co-op is unsurprisingly capital. Therefore, securing credit for new co-operatives is vital to helping create more start-ups.

Labour’s plans for regional investment banks give an opportunity to promote co-operatives across all regions by providing the funds needed to start new ventures.

Credit unions, as co-ops themselves, can also play a role here in providing the credit needed for start-ups.

No time to hang around

It is clear that Labour’s promise to double the co-operative sector once in government can be achieved by a number of reforms from Westminster but the key is using it to help build co-operatives and municipal socialism across the nation.

We should not hang around and wait for Corbyn to have the keys to Downing Street to start this enterprise.

Labour have the opportunity to enact such legislation elsewhere.

In Wales, Labour control the Assembly but better still the left has gained control of the party with the election of Mark Drakeford as First Minister.

The Welsh government in the past have been ineffective at best, neo-liberal at worst, but Drakeford looks like he’s going to do things differently.

Drakeford has promised the establishment of a new Welsh energy mutual and the establishment of a community bank of Wales but hidden inside the manifesto was a commitment to “to identify local anchor institutions and work with them to audit their contracts to increase the value and volume of procurement from regionally based SMEs.”

While Welsh Labour have missed out the commitment to co-operatives it shows the Welsh government have close eyes on Preston.

Mark Drakeford would do well to incentivise councils to enact the Preston Model all over Wales and build institutions that will help drive a co-operative economy.

Wales provides an opportunity to test how a central government can promote co-operatives while showcasing the benefits of municipal socialism on a country.

Labour can never deliver socialism via proclamation yet the party has always favoured an overly statist approach to socialism, and in many ways, this has been its undoing.

While libertarian socialism is beginning to find popularity in Labour’s youth the majority of the party are still overly obsessed with the nationalisation and the welfare state.

If only the ideas of Tom Mann had been embraced early in Labour’s history we might be living in a very different nation.

While John McDonnell says Preston’s “radicalism is what we need across the whole country” at present it is mostly talk.

It is time for the party to think beyond the state and leave behind social democratic manifestos.