"I'm old enough to remember workers being promised that Brexit would mean their wages weren't undercut." 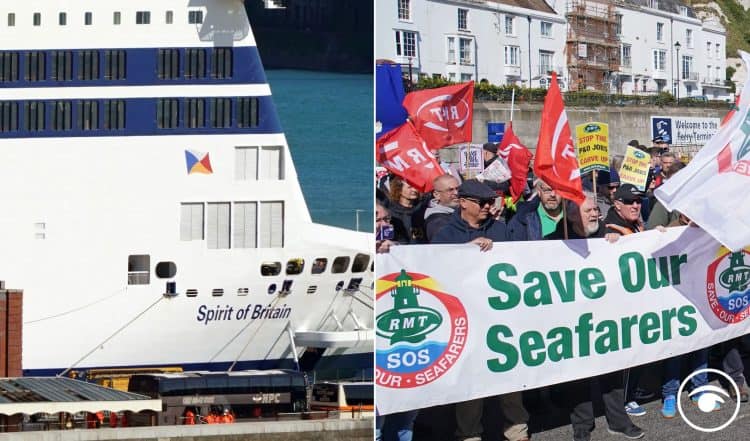 New crew on P&O ships will be paid at rates well below the minimum wage, a union has claimed amid continued anger over the sacking of 800 workers by the ferry giant.

The Rail, Maritime and Transport union (RMT) said it had discovered another “shocking twist” to the scandal because replacement crews on P&O ships will be on “poverty pay”.

More demonstrations will be held in the next few days, with growing pressure on the company to reverse its decision and the Government to take action.

The RMT said P&O ships on the Liverpool-Dublin route have now been crewed with Filipino ratings on contracts which pay below the minimum wage.

RMT general secretary Mick Lynch said: “The weakness in UK employment law has not only allowed the mass dismissing of UK seafarers it has also incentivised this barbaric behaviour because employers know there may be no effective sanction to stop them doing so, and on top of that they can get away with paying below the minimum wage.

“P&O may pay more than the minimum wage at first to agency staff but they will eventually move to rates below this simply because there is nothing to stop them from doing so.

“We fear poverty pay will be accompanied by seafarers being chained to 12-hour day, seven-day week contracts that operate continuously for six months, with no pension.”

ITV’s Joel Hills wrote a thread to explain how the ferry company plans to pay crew £1.80 an hour and how they can get away with it.

“The @RMTunion says P&O plans to restart its ferry service in Dover using agency crew from India + will pay them the equivalent of $2.38 (£1.80) an hour. RMT doesn’t offer proof but this is plausible and – while some may find this shocking – it would be legal. I’ll explain…”

In response, Jolyon Maugham tweeted: “I’m old enough to remember workers being promised that Brexit would mean their wages weren’t undercut.” A direct link to Brexit is not a definite fact but many people claim that the decision to leave the EU has partially caused this decision.

However, P&O staff in France, the Netherlands, and the Republic of Ireland, have not been made redundant.

Anoosh Chakelian wrote in the New Statesman: “Leaving the European Union, Brexiteers on both the right and left argued, would mean an end to importing low-cost European labour that “undercut” British workers. But the P&O mass lay-off exposes this argument as a red herring. The problem was not freedom of movement, but a loosely regulated labour market and poorly enforced labour laws, particularly relating to agency work and bogus self-employment.”