The prime minister has been criticised for comparing Ukraine's fight for freedom with Brexit. 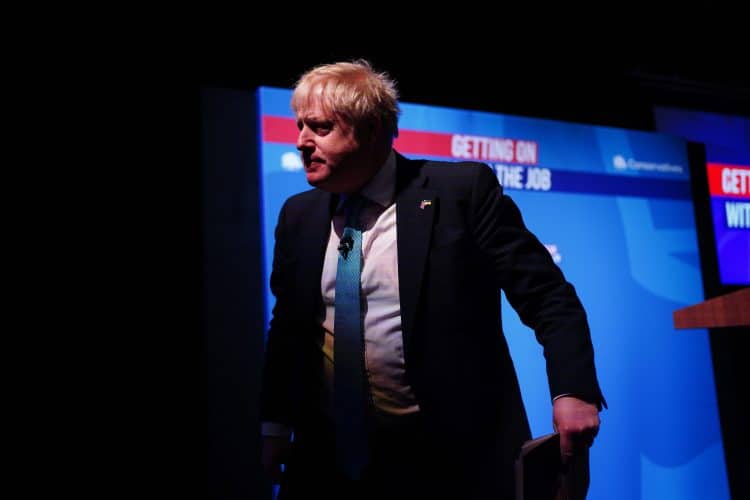 Boris Johnson has not been invited to a summit of EU leaders to address the Ukraine crisis amid fury at “cynical” remarks comparing Russia’s invasion with Brexit.

In a speech to the Conservative spring conference in Blackpool, Johnson claimed the world faced a moment of choice “between freedom and oppression”.

He continued: “There are some around the world, even in some western governments, who invoke what they call realpolitik. And you say that we’re better off making accommodations with tyranny.”

The prime minister then controversially added: “And I know that it’s the instinct of the people of this country, like the people of Ukraine, to choose freedom, every time.

“I can give you a couple of famous recent examples. When the British people voted for Brexit, in such large, large numbers, I don’t believe it was because they were remotely hostile to foreigners. It’s because they wanted to be free to do things differently and for this country to be able to run itself.”

The remarks sparked a disbelieving backlash across Europe, especially considering Ukraine applied just last month to join the EU, with Volodymyr Zelensky declaring” “Our goal is to be with all Europeans”.

Donald Tusk, former president of the European Council, said: “Boris Johnson likens Ukrainians’ fight to British people voting for Brexit. I can still remember the enthusiasm of Putin and Trump after the referendum. Boris, your words offend Ukrainians, the British and common sense.”

And Guy Verhofstadt, the former Belgian prime minister, added: “Brexit was about undoing freedoms and leaving the EU. Ukrainians want more freedom and to join the EU.”

Downing Street subsequently said that Johnson had not been invited to a meeting of EU leaders to address the Ukraine crisis, ahead of a special meeting of Nato leaders in Brussels on Thursday – despite reports of his enthusiasm to be involved.

A host of senior Tories joined in condemnation of Johnson’s comments. The ex-deputy prime minister Lord Heseltine told the Observer: “Boris Johnson cannot escape his responsibility for the disasters of Brexit by a cynical exploitation of the incredible bravery of the Ukrainian people. Millions of Conservatives will be ashamed at so flagrant an attempt to exploit the horrors we see every day for party advantage.”

Lord Gavin Barwell, who served as Theresa May’s Downing Street chief of staff, tweeted: “Apart from the bit where voting in a free and fair referendum isn’t in any way comparable with risking your life to defend your country against invasion and the awkward fact the Ukrainians are fighting for the freedom to join the EU, this comparison is bang on.”

Even vehement supporters of Brexit recoiled at the prime minister’s remarks. Broadcaster Julia Hartley-Brewer said: “Comparing the vote to leave the EU with the Ukrainian people fighting for their lives against a foreign invader is an insult to their bravery and sacrifice.”

“Respectfully, prime minister, words have a meaning. A majority of British people voted peacefully to exit the EU. Their democratic choice was respected. Brexiters went at length against free movement. Ukrainians are forced to flee.

“Ukrainians desperately want to join the EU. There were EU flags in 2014 in Maidan square; there are still in Kyiv bomb shelters.”