"I can feel maybe I have a home again because I feel that I lost everything that I had." 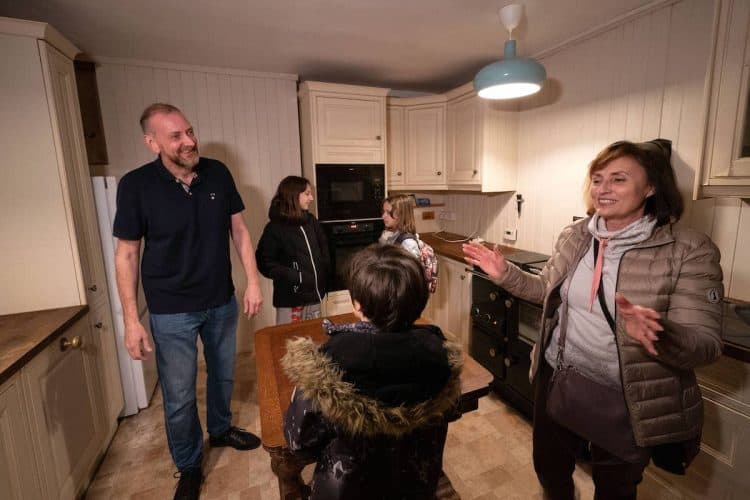 A four-generation family of 10 who fled the war-torn Ukrainian city of Kharkiv are moving into a home in Cambridgeshire, donated for their use by a businessman.

Mick Swinhoe, 52, said he bought the house next to his own in Caldecote, eight miles west of Cambridge, just before the war broke out, and he initially planned to use it as a “project house”.

The executive at an industrial automation company changed his plans, and after posting on Facebook groups he was connected with a family.

Mr Swinhoe said he wants the house to be used for “something more useful until I do something else with it”.

“It’s a better use for it really,” he said. “I can do what I want to do later when things get better.”

The family of 10, ranging in age from 10 to 90, have come to the UK under the Ukraine Family Scheme and were helped by their relative Roman Starkov, who is a British citizen.

The 38-year-old, of Cambridge, has lived in the UK for 20 years since travelling to the country to study.

The software developer helped his family through the visa process which he described as “pretty involved”.

“You have to fill out arcane forms, and for such a big group there’s a lot of repetition, but once that was sorted we went to a visa application centre, they processed us very quickly, that was in Albania,” he said.

He said his 90-year-old grandmother Ludmila Starkova does not have a valid international passport and had wanted to stay in Ukraine.

“On every border that was a challenge,” he said.

“Fortunately every single border they figured something out and allowed her to pass.”

This was so they could bring more of their belongings and their two dogs, Yorkshire terrier Mikki and mini Maltese Florie, both aged two.

“Yes they are safe, that’s amazing,” he said. “They’ve still lost everything.

“There’s still hope that maybe they can go back and maybe what they left behind will still be there. Maybe not.

“And there’s a lot of uncertainty about their future here. Will they fit in, will they find a place, will they feel comfortable? I don’t know.”

Ms Starkova said that when the war broke out in Kharkiv “it was 5am, we packed a few suitcases and I went to my mum’s home and we stayed there for five days as it was so scary to go outside”.

“We were in the basement,” she said. “We couldn’t go outside.

“We stayed five days in the basement without going anywhere.

“Then we decided that we had to leave as we couldn’t sleep, it was so scary. We just put our bags in the cars and went.

“We were so afraid someone would shoot our car or something like that. Recently friends of my friends were shot like that.

“It was so scary but we managed to go through the borders and when we passed several cities we felt relieved as we couldn’t hear those bombs and those scary noises.

“The first night we slept it was so quiet.”

She said her journey to the UK took 20 days and they were “exhausted”.

She added it was “such a relief” to arrive at the house Mr Swinhoe is letting them stay in.

“I can feel maybe I have a home again because I feel that I lost everything that I had,” she said.

“I did so much, my family, for us to live there, to earn money, nice place to live, work for kids. We lost in one day everything.

“I had really nice job that I love, nail technician, but I really love my job. I feel that I need to start again from zero.”

Asked about those who are helping the family, she said: “I feel that they’re saving our lives, otherwise I don’t know where we would stay because it’s quite expensive, and OK, we could for couple of weeks, but we need to live every day and we need to find a job first.

“I’m so grateful for everyone who supports us and can give us some place to live. I really appreciate it.”

The family were reunited at the home in Cambridgeshire on Tuesday, after they separated to travel from Albania to the UK.

They were shown around the home then spent Tuesday night in a hotel while the property is furnished.

Mr Swinhoe said his two daughters, aged 11 and 15, are “really delighted” there are three children among the Ukrainian family of 10, and he said they will be able to help integrate them into school.