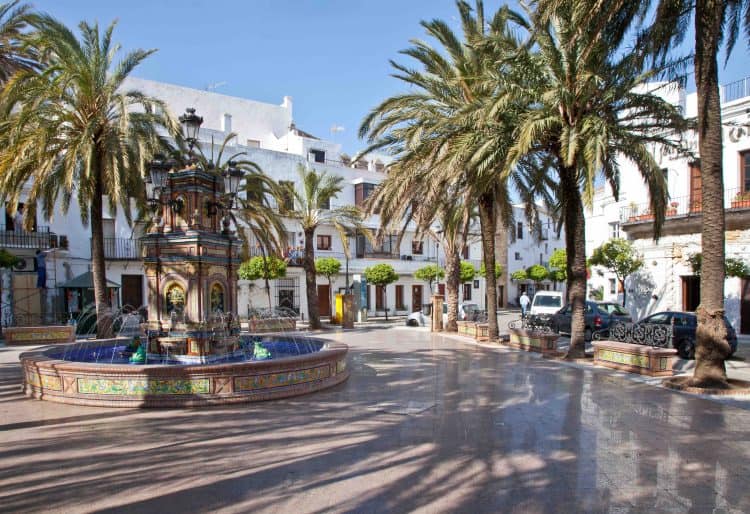 James Stuart has a story for everything. He once saw a fighter pilot shot down driving with his family in Beirut where he lived as a kid. His South African sister-in-law used to feed mice to a six-foot boa constrictor before putting it on the dashboard of her car and taking it to the shops in Johannesburg (so she didn’t get carjacked). But perhaps his most fitting story is how he (and subsequently I) ended up in Vejer – a whitewashed hilltop town between Tarifa and Cádiz in the Spanish region of Andalusia.

“I got hungry driving home after kitesurfing in Tarifa, so I took a turn off looking for a sandwich and ended up in Vejer, and I’ve never really left.” He says with a chuckle. Stuart says most things with a laugh, which is both endearing and confusing. You can’t tell if he’s telling the truth or pulling your leg.

I’m in town to check out Vejer, with Stuart as my guide. Stuart is Mr Vejer. When he arrived in a banged up VW Beatle almost three decades ago, it was nothing but a dusty, working town where a man with a donkey delivered your bread, and you could get an ensaladilla rusa (Russian potato salad) and a caña for about 125 pesetas (about 50-60p). Now, partly thanks to his resourcefulness, this famous pueblo blanco is a popular tourist destination lined with boutique shops, a Moroccan restaurant, various tapas bars and a hammam. Stuart is responsible for a lot of it – he owns a host of restaurants and hotels including El Jardin Del Califa, Califa Tapas and the new Hammam Vejer.

Stuart collects us from Gibraltar airport wearing a flat cap streaming with long, blonde and grey wavy hair. He looks like a cross between Billy Bragg and the late Sean Locke. His accent is hard to place, but he’s originally from Scotland. He’ll be 60 soon but has the energy and confidence of someone younger. As we drive out of Gibraltar, he explains he plans to swim the strait of Gibraltar soon. Why? He doesn’t know. Will he do it? Hopefully. Is he scared? A little.

As we drive along the Costa del La Luz (coast of light), we pass fields lined with poppies and freely roaming ginger Retinta cows stopping at The Hurricane hotel for a caña (small beer). We perch on the clifftop terrace beneath a pale blue sky, as a lone paddle boarder glides on by below. “You see over there? That’s Morocco,” Stuart says before launching into another history lesson.

His knowledge of pretty much everything is impressive – the Moors, pottery, food, design, travel writing. Though if he were on Mastermind, his subject would be Andalusia. His education comes from decades of living here. Initially, he ran a bike guiding business offering tours of the region before opening hotels and restaurants. Still, when he talks about Andalusia, he lights up.

We check into La Casa del Califa (Stuart’s hotel) a few hours later. Technically, it’s three hotels in one: La Casa del Califa, Las Palmeras de Califa and Plaza 18. Each offers something a little different, though Plaza 18 is more high-end. Stuart bought the first house for around £1,000 and lived in the building where La Casa del Califa now stands. He ran it as a small B&B before borrowing money to expand the business. He has been adding to it every year since, and you can see his personal touches littered the building.

He shows us photographs he took in the Middle East, pottery his dad gave him and various pieces of artwork he commissioned. The warren-like hotel has tunnels and stairs snaking off every which way, a heavily-Moroccan influence with incense burning and Berber rugs scattered about. Rooms are well-designed with trinkets and art picked by Stuart. In Las Palmeras, my room overlooks the hotel’s only pool framed by whitewashed houses with terracotta tiled roofs offering knockout views over the valley below. Inside are tall plants, Arabic artwork, traditional wooden beams and tiled floors.

On our first evening, we dine on the patio of El Jardin Del Califa – Stuart’s Moroccan venture – packed with a mixture of locals and tourists. The patio, scattered with palm trees and stony columns, is lit by ambient lighting and narrated by chatter and the occasional chirping bird. The menu is crammed with Middle Eastern fare, from Lebanese tabbouleh and falafel to tagines and kebabs. The service here is exemplary.

The next day we check out Vejer. We’re staying in the heart of Vejer, opposite a cute, tiled fountain that marks Plaza de España – previously home to the town’s bullfights and fiestas as it was the flattest area. Vejer is a tiny, ancient village dating back to the Bronze Age, which is 10km from the sea and around a 45-minute drive from Cádiz.

Aesthetically, it’s the kind of place you see on photos of Spain on Instagram – narrow, snaking streets strung with washing lines that lead only to churches, tapas bars, palm trees and crumbling, ancient walls. Like many places in Andalusia, there is a Moorish influence present in Vejer. The town’s church, Iglesia del Divino Salvador, divided into two styles (Mudejar and Gothic), is built on the site of an ancient Arab mosque. You’ll also find statues and ornaments with women wearing cobijadas (a black dress and veil with only one eye visible) everywhere. Though Stuart tells us they’re cultural, not religious.

Later, we head to Califa Tapas – one of Stuart’s many ventures, which he runs with help from his partner, Ellie Cormié, a Scottish writer, restauranteur and interior designer. The two met when Ellie chanced upon Vejer and fell in love – both with him and the town. They were introduced to one another by Annie Manson, another Scot who runs cooking classes in Vejer.

At one of her famous cooking classes, Annie tells us how she came across Vejer.

“I ended up here because I was looking for a lock up and leave the beachfront apartment in Tarifa – as a bolt hole from my busy London catering company (Annie B’s Parties & Lunches). Living in Spain was never on the agenda. On the last day of a four-day trip in March 2003, I ended up in Vejer for the first time to look at my house. I walked in and fell in love.”

Annie’s house feels like a cross between a Moroccan riad and a typical Spanish villa. There’s a big kitchen, an internal courtyard with a small dipping pool in the centre and a sprawling terrace with views across the valley and new town.

As we start her cooking class, she tells us she’d be lost without her sous chef, Pepi, who steps in now and then to offer some advice. Annie is also a sherry expert, and her passion for it is palpable. She thrusts glasses to each group member, taking a swig of her own as she does. “See if you can guess what this one is”, she says while putting two on the table. “One is a fino; the other is a manzanilla”. By this point, we’re all pretty well-oiled, and the question lingers.

Soon, Nawal, a Moroccan chef who works in one of Stuart’s restaurants, comes in to cook a fish tagine. She demonstrates on the stove, sweating the potatoes before adding herbs and spices and, later, the fish: the tagine pot cracks, and liquid spills from it at one point. Stuart tries to mop it up, but she tells him it’ll seal itself – and it does. We have dinner on the balcony, accompanied by several sherries, before calling it a day and drifting back into town.

We spend the coming days drifting between Vejer and its surrounding areas: hiking through the stunning La Brena y Marismas del Barbate Natural Park and zipping from Cape Trafalgar to Vejer on electric bikes, passing along part of the EuroVelo cycle route through ramshackle farming villages, past towering windmills and finishing up watching a donkey chowing down on poppies back in Vejer.

Then, on our final evening, we sit having dinner at another of Stuart’s restaurants, Corredera 55. He recalls another tale as we gauge on rich pork cheeks and indulgent desserts. This one is about a time a famous travel writer visited Vejer. Stuart took him to one of his favourite old-school bars, El Cura, owned by a grumpy bloke, Luis, who never smiled and made up a tale for a laugh.

“I told him locals would go in, usually on a Friday and Saturday night, and they’d make a bet. And basically, if you could get Luis to laugh or crack a smile, you’d be invited to drinks all night long. And, of course, he published it. It would be hilarious because, after that, I’d go in occasionally, and there’d be a group of Danes or Americans. They’d be standing there telling jokes and pulling stupid faces, and Luis could never understand. He’d usually stand there and look at them like complete idiots.”