Presenter, author and traveller Kate Humble shares her travel stories with us. 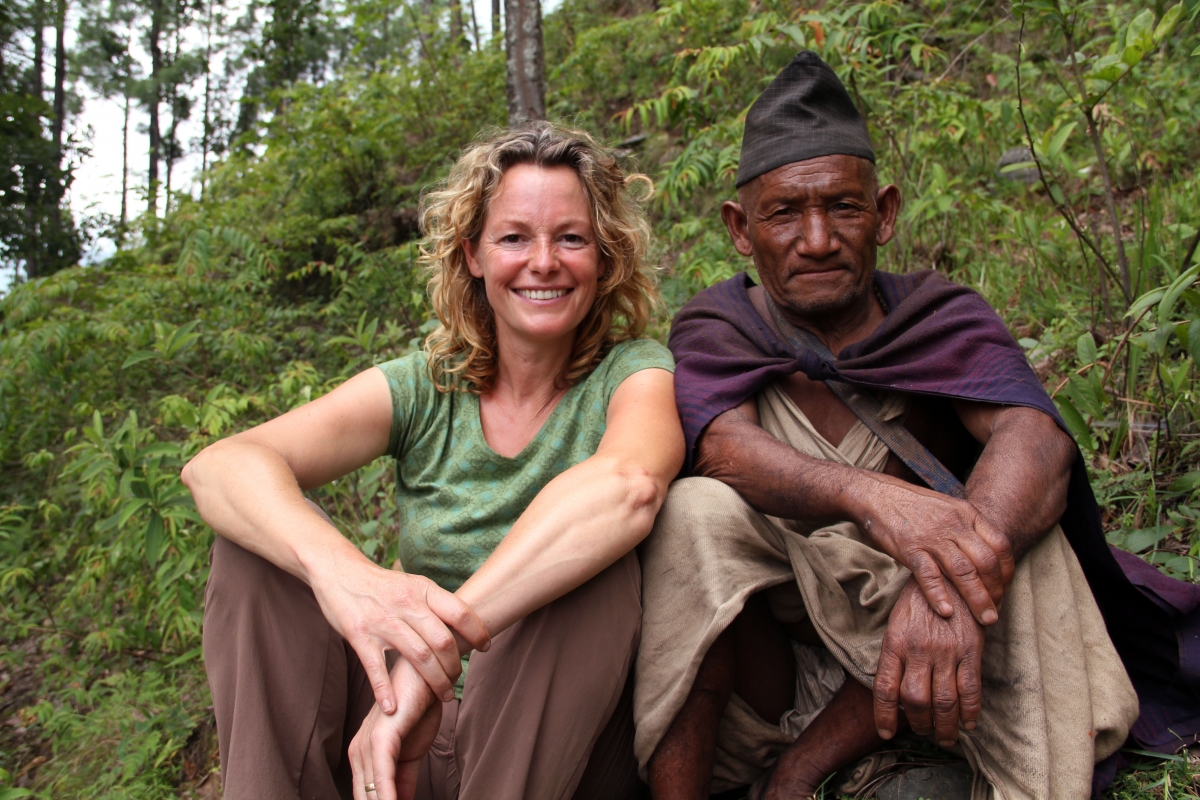 For this month’s Travel Tales, we caught up with television presenter, author and infamous traveller, Kate Humble. She told us about her early childhood holiday memories (like when she carried a dead puffin around Skegness), her meeting with a kind stranger in Namibia and why she still has nomadic tendencies.

Tell us about your first holiday memory?

I don’t know how old I was, maybe five or six, when we drove to Alfriston in East Sussex.  I was terribly car sick as a child, so every journey would have to be broken up with lots of stops, and I remember having a picnic in a field, sitting on a tartan rug eating apples in the sunshine. Very Enid Blyton!

We stayed in a hotel and the garden was full of coo-ing woodpigeons, a sound that immediately takes me back there when I hear it now.  And we went to Drusillas Zoo, which I loved.  It didn’t have any big exotic animals, just things like rabbits and guinea pigs and very badly behaved goats.

What did a travel/holiday mean to you growing up?

Going on holiday always seemed like an adventure. We rarely went abroad, but the very act of travelling, of packing up the car and setting off was always exciting. We had a lot of childhood holidays on the island of Sark.  For someone as travel sick as I was it was torture getting there – driving to the ferry, then the ferry over to Guernsey, then the little boat to Sark itself, but once there, I never had to get in a car again, as there are none on the island. Everyone had bikes, there was a gang of us who went every year and we children were allowed to head off on our bikes on our own for hours and hours to explore.

Tell us about a special holiday moment when you were a child?

My grandmother had a great friend who had a bungalow on the Lincolnshire coast near Skegness and some years we would go and stay with her.  We would spend all day on that huge expanse of beach and in the dunes.  One day I found a dead puffin. I’d never seen a puffin before – alive or dead.  This one was in perfect condition (apart from being dead!) and I remember thinking I had never seen anything so beautiful – that smart black and white plumage and rainbow beak.  I carried it around like a child with a teddy bear, until my mum persuaded me we should bury it, which we did, with much solemn ceremony.

We were driving down a very rough dirt road in Namibia when our truck suddenly ground to a halt.  It had fuel, but it just died.  Some distance off the road was a small farm.  I walked down to see if there was anywhere there who could help us.  I found a man wearing the uniform of a park ranger.  He laughed when I told him what had happened and said he knew exactly what was wrong with our car.  “the road is so bad,’ he said, ‘that the cables sometimes get shaken off the battery and the car stops working.’  He looked under the bonnet and he was absolutely right.  The car fixed, we asked if we could give him anything in return. He needed new batteries for his radio, which we went to buy him, returning the next day to deliver them. He was so delighted he took us to the magical Petrified Forest, where he worked as a ranger, and we had the whole, magical site to ourselves.

Tell us something you’ve never told anyone before (about a trip you’ve been on)?

I slept in a ditch at the side of the road in Madagascar for two nights waiting for transport in a very remote part of the island.  I don’t recommend it!

Who do you think would make a great travel partner? (dead or alive)

Lassie – dogs are perfect travel companions.  Clever, resourceful, energetic and have no wish to go to night clubs.

How much does travel influence your food?

A lot.  I’ll often try and recreate dishes I’ve eaten abroad, although I’m yet to attempt the testicle soup I had in Mongolia…

I just don’t think it is possible to have a favourite country.  I’ve been so lucky to have the opportunity to travel as widely as I have.  I’ve been to all 7 continents and visited over 100 countries.  I will always feel drawn to African countries because Africa was the first continent I travelled to on my own and it was a formative journey.

I spent years and years looking for the place that I might feel happiest living, and whenever I travel I still always wonder whether I could live in the country or the place I am visiting.  I was very tempted by a farm that was for sale in a very remote and beautiful region of South Africa, but I couldn’t afford it! I still dream of living nowhere, but being nomadic, travelling in my camper van and stopping whenever I come across somewhere that is enticing.  And eleven years ago I did settle in a new country, albeit still part of the UK where I knew no one and had no connections.  And I have to say that Wales now feels more like home than anywhere I’ve lived in my adult life.

Travelling for me has been the most important park of my education.  I didn’t go to university.  Instead I spent a year in Africa, travelling alone, aged 19, and I learnt more in that year than I had in all my years at senior school.  And every time I travel I learn something new, discover something, put something I’ve read about or heard about into context.  Taking ourselves away from what is familiar (and you don’t need to go to far flung parts of the world for this to happen) I think opens our minds as well as our eyes.  It can inspire, educate, give greater insight, instil tolerance and remind us what an extraordinary place the world is.

I’ll be spending most of August in Arctic Norway, first on an island called Senja and then leading a trip for Natural World Safaris to Svalbard.

The paperback of my book Thinking on my Feetis out at the end of May.  I’m doing a number of theatre shows and literary events (see katehumble.com for details).  I’m filming a new series of Animal Park for BBC1 and a series for Channel 5.

Thinking on My Feet by Kate Humble published by Aster is out now in paperback (post June 1st publication) available from Stanfords, home to the world’s largest collection of travel books, maps, guides and globes, priced £9.99 (www.stanfords.co.uk)

More from the Travel Tales series…