Outrage on packed commuter train as woman is fined for standing in the DOORWAY of a first-class carriage because there was no other space. 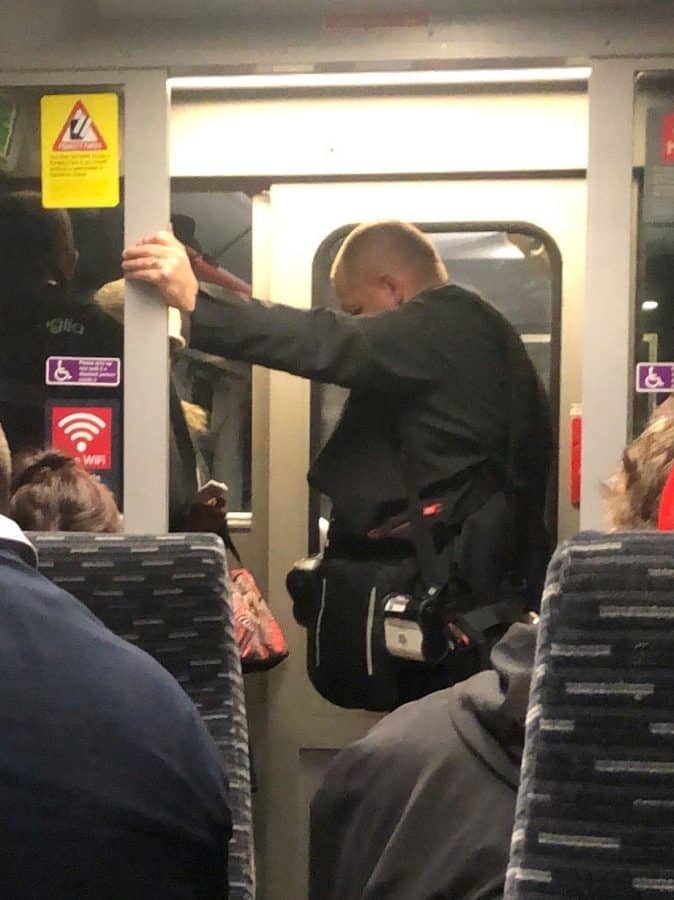 Furious commuters blasted rail chiefs today after a woman paying £6,000 a year for a season ticket was fined for standing with just ONE FOOT in a 1st class carriage.

The un-named commuter was stopped by a ticket inspector on Nov 13 on the Greater Anglia Trains Liverpool Street to Clacton-on-Sea, Essex, service.

The train was packed full with commuters leaving the un-named woman no other choice but to stand by the doorway with her a single foot in the compartment.

She was confronted by the inspector in front of astonished commuters when the train stopped in Shenfield, a suburb of Brentwood, Essex.

Taking to Twitter, other commuters vented their frustrations at the treatment of the woman.

Ben Cooper tweeted: “Someone is trying to charge a woman for having stood in the doorway of first class on packed train and I’m about to blow my f***ing top.

Meanwhile Katie Burnell tweeted the Greater Anglia train service to say: “The ticket inspectors on the 18:35 LST- Clacton on Sea are behaving like bullies.

“A woman is being charged a fine that is completely shocking – she stood one foot in 1st class in a packed carriage.

“Something needs to be done. They’ve cornered her. Camera in the carriage needs to have the footage reviewed. SHE DID NOTHING WRONG.

A third commuter, Georgie Smith, commented: “Absolutely disgusting behaviour from a ticket inspector on @greateranglia service who is issuing a woman a fine for daring to stand with ONE FOOT in first class despite the train being so busy no one could move.

“Glad she had the support of many people who didn’t just stand by though.”

Speaking of the conductors, she said: “They actually get commission and have targets to hit, so “just following orders” doesn’t seem valid to me.”

Another commuter added: “I think Greater Anglia should be ashamed of themselves, these trains get so packed you have no option. DISGRACEFUL.”

Greater Anglia, which has been criticised for delays and packed trains, today remained unrepentant.

A spokesperson said: “First class carriages, including the vestibules and aisles, are for the use of first class ticket holders only.

“Our revenue protection officer advised the customer there was more space available further down the train.

“If the customer would like to appeal the penalty fare, they can do so via IRCAS.

“We would encourage her to contact us direct if she is unhappy with how the situation was handled.

“Passengers must have the correct ticket for the time and class of their journey when travelling on one of our trains.”