Germany’s certainly not short of cute towns oozing culture, history and charm. Small cities like Munich and Cologne are straight from a fairytale book, with incredible gothic architecture mixed with well-kept town squares and gingerbread houses on the outskirts. Factoring in the fascinating differences between the former east and west Germany, there’s so much to […]

Germany’s certainly not short of cute towns oozing culture, history and charm. Small cities like Munich and Cologne are straight from a fairytale book, with incredible gothic architecture mixed with well-kept town squares and gingerbread houses on the outskirts. Factoring in the fascinating differences between the former east and west Germany, there’s so much to discover about the country one can’t help but feel it’s an overlooked destination.

To discover more of this wonderful country (and attempt to bump into Angela Merkel, my hero) I ventured to the seemingly nondescript German city of Leipzig. Built as an important trading town between east and western Europe, it now houses over 570,00 people, one of the largest book fairs, and a University that brings vibrancy to the area. Because of its visiting contingent, there’s a huge proportion of hotels in the area; I stayed at the InterCity Hotel which was excellently located next to the station, a tram stop and a five-minute walk from the centre with delish breakfasts to keep me going while I played tourist.

Without doubt, there’s bags to explore, but thanks to its compact size, it’s ideal for an affordable weekend away. Here are eight of many reasons to put it on your bucket list.

1) Part of the ring road is called Martin Luther Ring

It’s the small things, right? Martin Luther Ring was actually named after reformist Martin Luther who visited Leipzig in his time, but we’re loving the world play in reference to Martin Luther King. The multi-laned ring road snakes around the city’s centre, giving a defined border to the mainly-pedestrianised area full of shops, restaurants, small squares and famous churches. The road signs are clearly visible, so take a snap for a giggle on Instagram.

2) The warehouses of Spinnerei 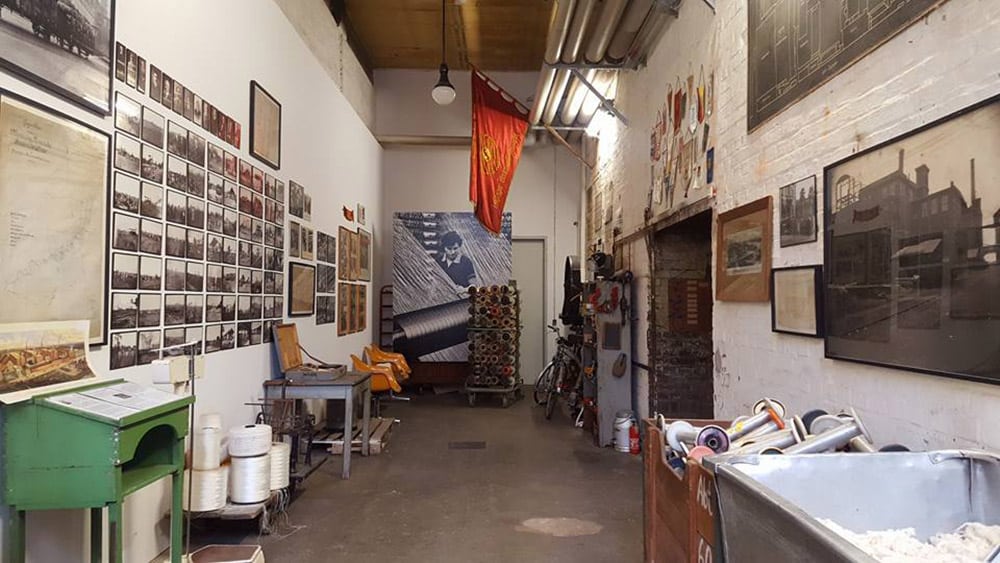 The former East Germany city still bears the scars of communism; large warehouses remain empty and bleak architecture prevails some suburbs. But Europe’s former largest spinning factory Spinnerei gives the sometimes sad story a happy ending: the complex has been turned into a creative village, with artists’ residences, studios, craft shops and even a cinema and museum (shown). At first, the area appears deserted, but visitors are free to try a door, and peek inside if it’s open. The corridors are graffittied, only adding to the hip vibe that rivals its larger neighbour of Berlin. 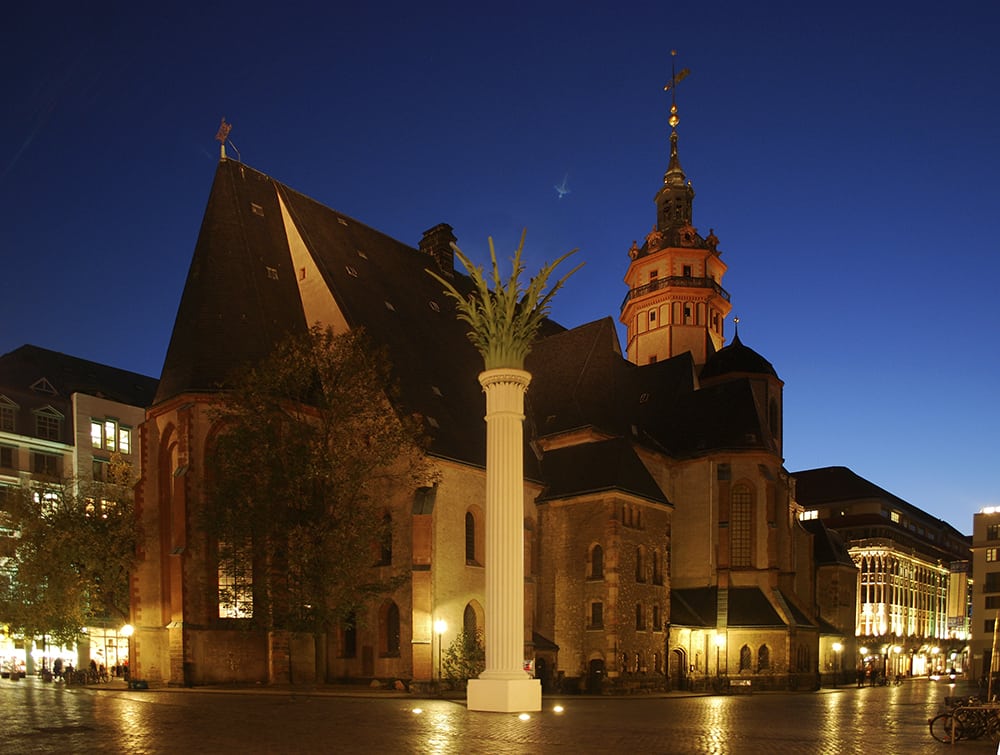 It’s shameful to think of Leipzig as a nondescript town when the first action that led to the end of the Berlin Wall took place outside St Nicholas Church, giving it a prime place in world history. Catching the moment when communist forces weakened, locals braved their wrath to peacefully demonstrate every Monday at 5pm against the regime. Each Monday, more and more gathered, eventually other cities followed, and the mass resistance led to the fall of the wall on 9 November 1989. Today, soft lights are dotted around the pavement slabs, and turn on intermittently, symbolising the steady pace in which the protests grew. 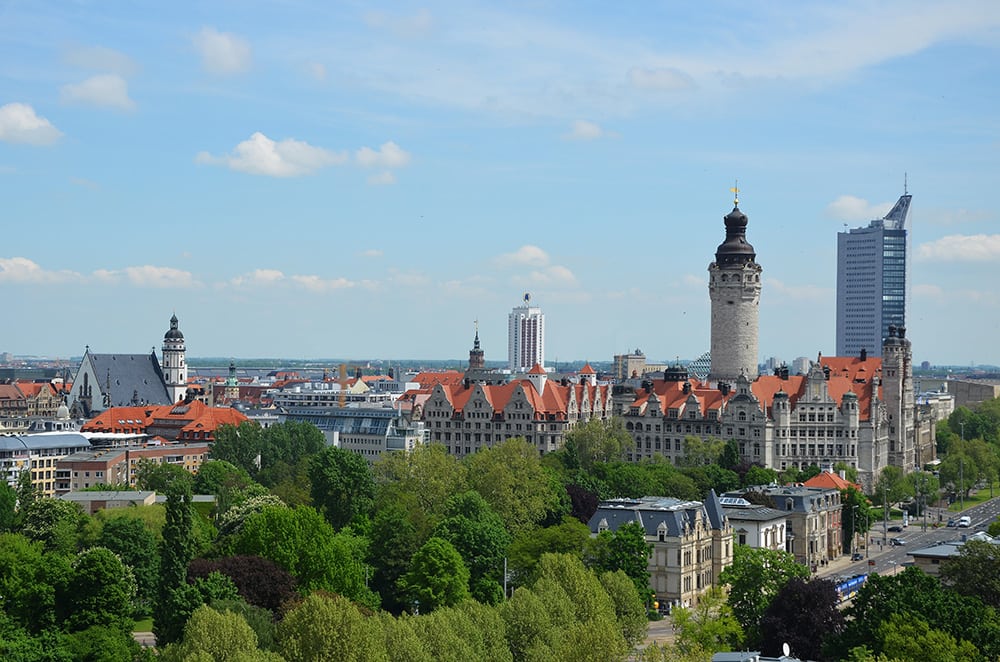 With sprawling trees, tall church spires and chocolate box houses, Leipzig from above a sight to behold. Luckily, there are a few choice places to witness it. The best is the top of The Monument to the Battle of the Nations, a huge building just a little outside of the city. There’s a lift to different levels inside it, but only the climbers can get to the dizzying height at the very top. For a more sheltered experience, The Panorama Tower has a restaurant with incredible views and competitively priced set menus, as well as a la carte. 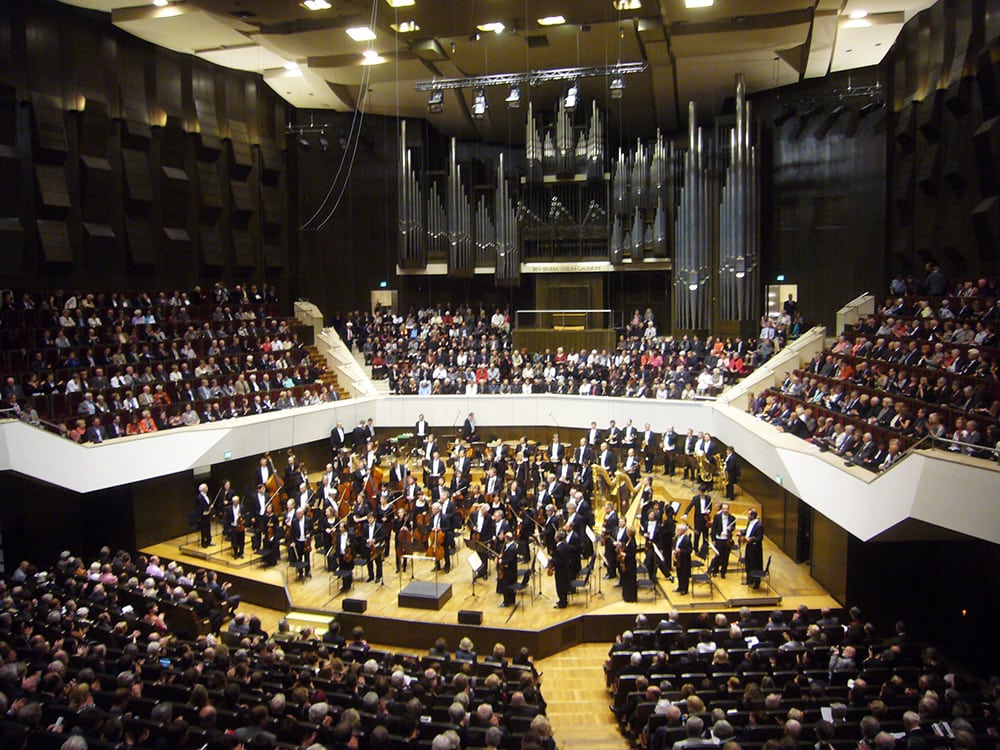 Supposedly, the famed concert hall of the Gewandhaus has one of the best acoustics in Germany. Spending an evening enthralled by the house orchestra, we wouldn’t disagree. Though the original hall was built in 1781, it’s benefitted from an excellent amount of investment, so the lavishness of the hall reflects the high standard of those appearing on its impressive stage.

6) The Stasi Museum will stick in your mind

That the Stasi museum (Runde Ecke) is located in Leipzig’s former Stasi HQ means there’s a resonance that stays with you well after the trip has ended. Use an audio guide to fully appreciate the artefacts, rooms and photos that are open to the public – the horrors of what the GDR regime’s secret police did in those very walls are made all the more real.

Apparently Leipzig is the vegan capital of Germany, which is a little like saying Amy Childs is the smartest person from TOWIE; the bar is pretty low. We’re not fully sure if it’s a vegan’s paradise, but we were impressed with the larger-than-usual range of meat and dairy-free options. The famous Auerbachs Keller (Leipzig’s second oldest restaurant made famous by Goethe’s Faust) is always packed could have easily stuck to a meaty menu, but veggies and vegans will find hearty eats. For modern veggie (halloumi, soya burgers and the like) served with nice cocktails and a young crowd, try Café Luise.