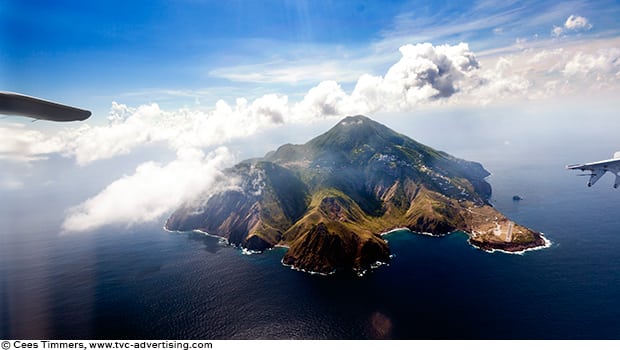 The adrenaline-pumping landing at Saba in the Caribbean has won top spot in 2017 Scenic Airports poll.

The world’s shortest commercial runway, on the Caribbean island of Saba, has topped a global travel poll of the world’s most scenic airport landings, conducted by the private jet booking service PrivateFly.

With a runway just 400 metres (1,312 feet) long and a challenging approach, pilots must have special training to land at the Dutch Caribbean island airport (officially called Juancho E Yrausquin Airport). Only certain turboprop aircraft such as the BN-2 Islander or Grand Caravan are agile enough to perform the short stop required.

One voter commented: “Cliffs, ocean and an adrenaline-pumping experience when you land, feet above a cliff and come to halting stop.”

A panel of major names in the travel industry formed the shortlist for the public vote, with travel writer Seth Miller nominating Saba. He described the “gorgeous scenery…a mountain sticking up in the middle of the ocean”.

Adam Twidell, CEO of PrivateFly and an experienced pilot, comments: “Flying into Saba is extraordinary – something I’ll never forget and recommend highly to any aviation enthusiast. You approach the mountainous island towering out of the sea, to see an impossibly tiny runway appear perched on a cliff. Only highly-skilled pilots can qualify to fly to Saba, so even as an experienced pilot I felt completely at ease throughout the approach. Saba has an exceptional safety record making it one of the most memorable civilian aviation experiences available anywhere in the world.”

Bruce Zagers, Commissioner of Tourism for Saba added: “We are thrilled to have been elected as the world’s most stunning landing 2017. With this accomplishment we hope that many more adventurist and casual visitors will choose Saba as their next destination, so that they too can experience landing on Saba.”