Lee Higgins experiences Tour de Provenance.  July 5th 2014, the Tour De France arrives in Yorkshire with anticipation at fever pitch. As both a cycling enthusiast and a proud Yorkshireman, my excitement was almost palpable. The world’s greatest bicycle race, beginning right here, on my own front doorstep. For a county renowned for its great outdoors, the Grand […] 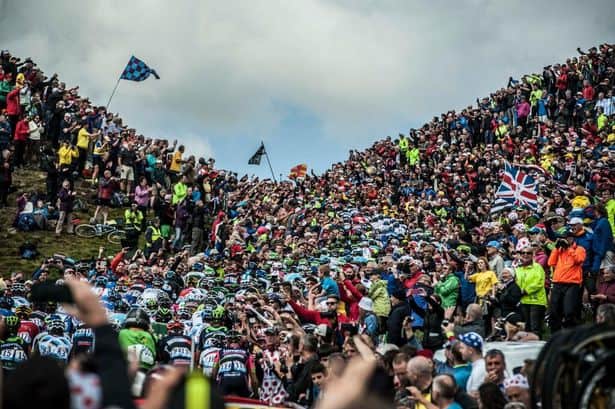 July 5th 2014, the Tour De France arrives in Yorkshire with anticipation at fever pitch. As both a cycling enthusiast and a proud Yorkshireman, my excitement was almost palpable. The world’s greatest bicycle race, beginning right here, on my own front doorstep. For a county renowned for its great outdoors, the Grand Depart was tantamount to the opening ceremony of the Olympics.

To say that Yorkshire embraced the hosting of the Tour is an understatement. For two days in early July, the county rolled out the red carpet for the world’s finest riders. Yellow, Green and Polka-dot bunting lined the streets, old bicycles were spray painted yellow and were proudly showcased outside Pubs, Restaurants and Cafes, one of our more famous exports even got in on the act, rebranding themselves as ‘Yorkshire Thé’ for the summer.

The crowds turned out in their numbers over two perfect days of cycling, with thousands lining the streets of our most famous historic Market Towns (Harrogate, Otley and Holmfirth to name but a few)  and tens of thousands finding vantage points along the Col de Buttertubs and Col de Holme Moss. A tunnel of noise and colour followed giants of the cycling world such as Froome, Contador, Kittel, Sagan and of course the imperious Nibali throughout all four corners of Yorkshire.

The Grandest of Grand Departs. It’s fair to say that the bar has been well and truly raised. Over to you Utrecht.

So six months on from le Tour, where are we? Has a lasting legacy been created?  Well, in a word, Yes. The idea of a ‘Tour legacy’ may not have featured as prominently on the evening news as that of the London Olympics. The infrastructure was not put in place to mould the next generation of cyclists. Instead, a lasting legacy relied simply on members of the public being excited and enthused by what they saw and experienced in early July, finding a bike, and going for a ride.

And what better place to go for that ride than Yorkshire? The rolling hillsides and ancient woodlands make for the most picturesque backdrop. The small hamlets and villages which populate North Yorkshire are bursting with character and the winding, undulating country roads offer both an interesting and challenging route. France may have Alpe d’Huez and Ventoux, but in England, North Yorkshire is about as good as it gets.

All cyclists will have experienced the annoyance of road traffic, the stop-start of passing through built-up areas. A cycling experience in North Yorkshire offers miles upon miles of quiet, unbroken highway. Quite a refreshing thought as most of us consider our weekday cycling commute, no doubt. It offers all that could be desired, from time-trail flat stretches, to quad-burning inclines, the terrain of North Yorkshire really does have it all.

Which is why Provenance Inns has created the Tour de Provenance. A route which is intended to resemble the first day of the 2014 Grand Depart stretching from Moulton to Harrogate. The route is over 150 miles in total, and would naturally offer a challenge to even the most hardened cyclist. However, it has also been sensibly designed so that it can be dissected into numerous parts, meaning that it is accessible for cyclist of any ability. For example, the Tour de Provenance route between Northallerton and Knaresborough is approximately 30 miles, so could be tackled as a one off cycle, part of a cycling-centred weekend or could equally serve as a warm-up for those who have the appetite (and endurance) for a longer ride.

Having cycled part of the Tour de Provenance route at the weekend, I must confess that I was impressed, firstly with the idea of creating a tangible and definite route which could provide a simple (and welcome) navigational aid for visitors who are not familiar with the area, but also with the route itself, allowing riders to take in all that is good about cycling in Yorkshire, and all that we so fondly remember about the first day of the Grand Depart. There was also a great sense of adventure; cycling into the unknown, using the small villages and local landmarks as way-markers as we headed to our destination.

Throughout the weekend, we stayed at the Carpenters Arms (Felixkirk) and the West Park Hotel (Harrogate) both of which are part of the Provenance Inns Group and are located along the Tour de Provenance Route. The Carpenters Arms is a traditional village inn which has real charm. It has a welcoming and warm feel about it; a perfect retreat on a dark, cold November evening. Rooms were clearly newly renovated, but retained their character through features such as exposed original timber roof trusses and an understated, countrified décor. The food and hospitality was flawless; rib-eye steaks were cooked to perfection and the Bakewell Sponge was moreish, even after a large starter and main course. The beer of choice was naturally Black Sheep, brewed just down the road in Masham. If it’s a genuine and authentic insight into Yorkshire you’re after, the Carpenter’s arms ticks all the boxes.

The West Park Hotel is a contemporary boutique hotel which has been transformed from a Victorian coach house. It sits in the heart of Harrogate, and has the buzz and feel of a slick, classy city hotel. As with the Carpenters Arms, the food was excellent. The Seared Grouse Breast (with Black Pudding and Pancetta) and the Pan Fried Wild Mushrooms with Toasted Brioche (for breakfast) were particular highlights. The rooms were finished to a high quality, reaffirming the fact that the hotel is located in one of Yorkshire’s most elite and desirable destinations.