By Sean Sheehan ‘I like to spend some time in Mozambique’ sings Dylan and he’s right on the ball there. A beautiful place for a winter break, filled with sunny, happy people and with some amazing places to stay. There was a time when most European travellers reached Mozambique  from South Africa but now you can […] 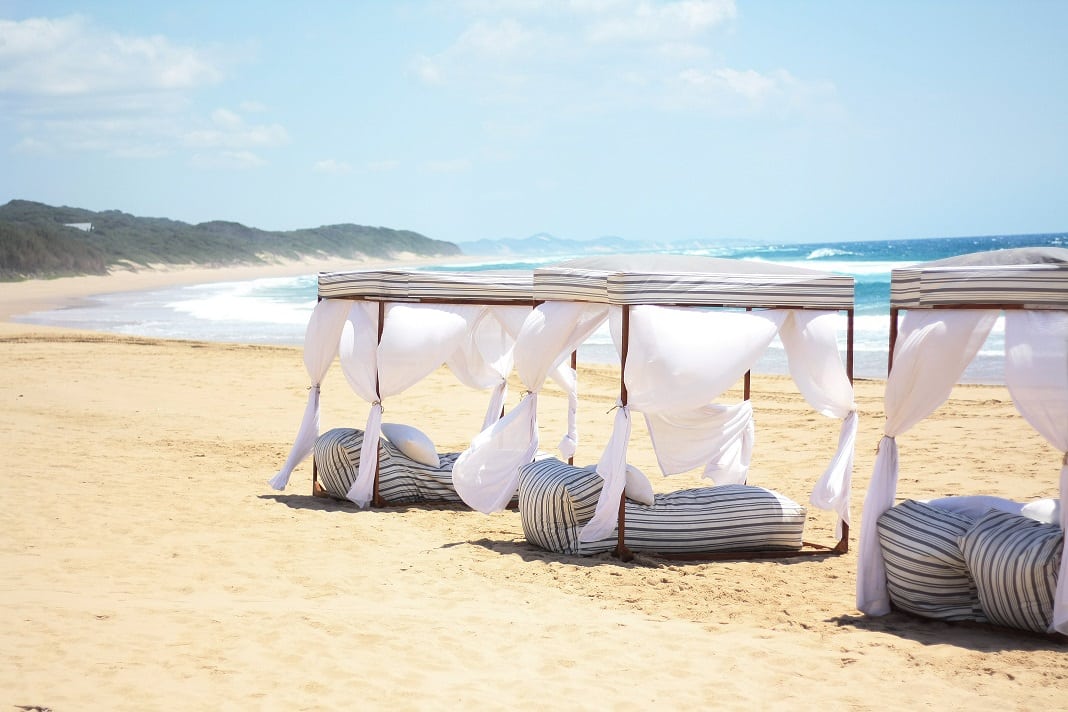 ‘I like to spend some time in Mozambique’ sings Dylan and he’s right on the ball there. A beautiful place for a winter break, filled with sunny, happy people and with some amazing places to stay.

There was a time when most European travellers reached Mozambique  from South Africa but now you can fly direct to the capital Maputo via a short hop to Lisbon with TAP. This brings you to a well ordered city sitting on the east coast of Africa looking out over the Indian Ocean. The grande dame in this  once war-torn city is the Polana Serena Hotel, a relic of the last post of the Portuguese  empire and now beautifully restored. A grand colonial portico, set in pretty flower beds of African lilies, distinguishes the front while inside an antique lift cranks you up to your spacious room. Manicured lawns and a parterre straight out of 18th-century France, lend grace to the grounds which also accommodates a pool, spa and lap pool. The city’s craft market, where a little bargaining can fulfil your gift buying for the year, is ten minutes away on foot. 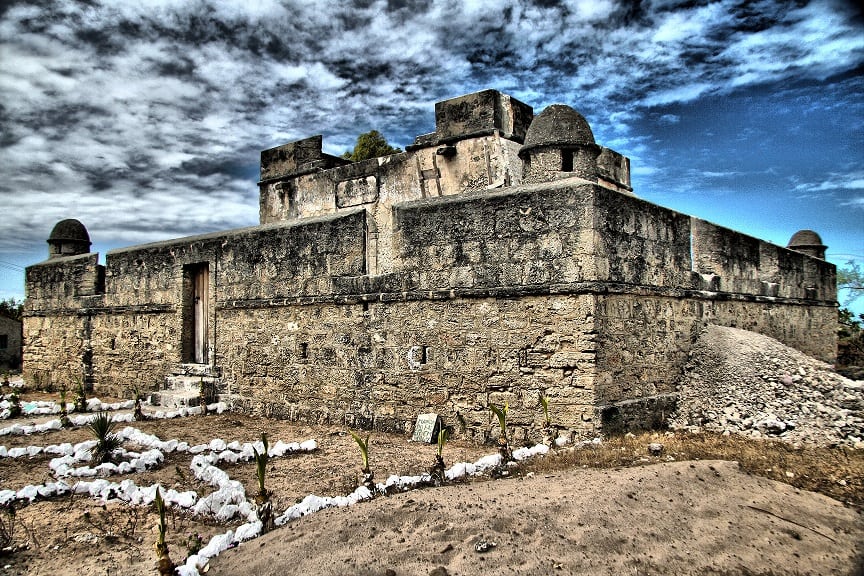 In contrast to colonial-style Polana , the shiny new Radisson Blu sits in a state-of-the-art complex defined by snazzy architecture which is more pleasing on the eye than any building you’ll find in Canary Wharf. The hotel’s corridors look over a central well decorated with artwork and the modern restaurant, Azur, is the best in the country for innovative cuisine: Mozambican-style food from braised goat to daring seafood dishes.

My favourite hotel in the city, the Southern Sun, is is right on the beachfront, with rooms looking out across landscaped  gardens to Maputo Bay. Although right in the heart of the city this place feels like a holiday destination with a busy pool and a buzz of activity but there is a bar for guests, tucked discreetly away from the noise, under an African rubber tree providing shade in the heat of the day and a cool hangout in the evening.

In neighbouring countries wildlife parks are big business with busloads  of visitors jostling each other to get the best shots of the big five. Mozambique has relatively little of this but an hour’s choppy ride on a launch across Maputo Bay will bring you to the Machangulo peninsula offering total relaxation.

At the head of the peninsula is Machangulo Beach Lodge, a series of pretty bungalows secreted into the hillside above a vast, empty, sandy beach. As the launch approaches the shoreline only a few thatched roofs show any evidence of a settlement. Greeted by dancing and singing employees, you paddle ashore to be driven in a little golf cart up to your room, either a pleasant canvas-and-wood framed bungalow or lower down a suite with kitchen and private pool. A creatively decorated dining/bar area beckons at sundown for drinks  while a beach bar can keep you hydrated as you while away the afternoon on a sun lounger. The lodge offers lots of activities from visits to other islands, a trip to the local village, scuba diving courses, fishing trips where you can eat what you catch for dinner. 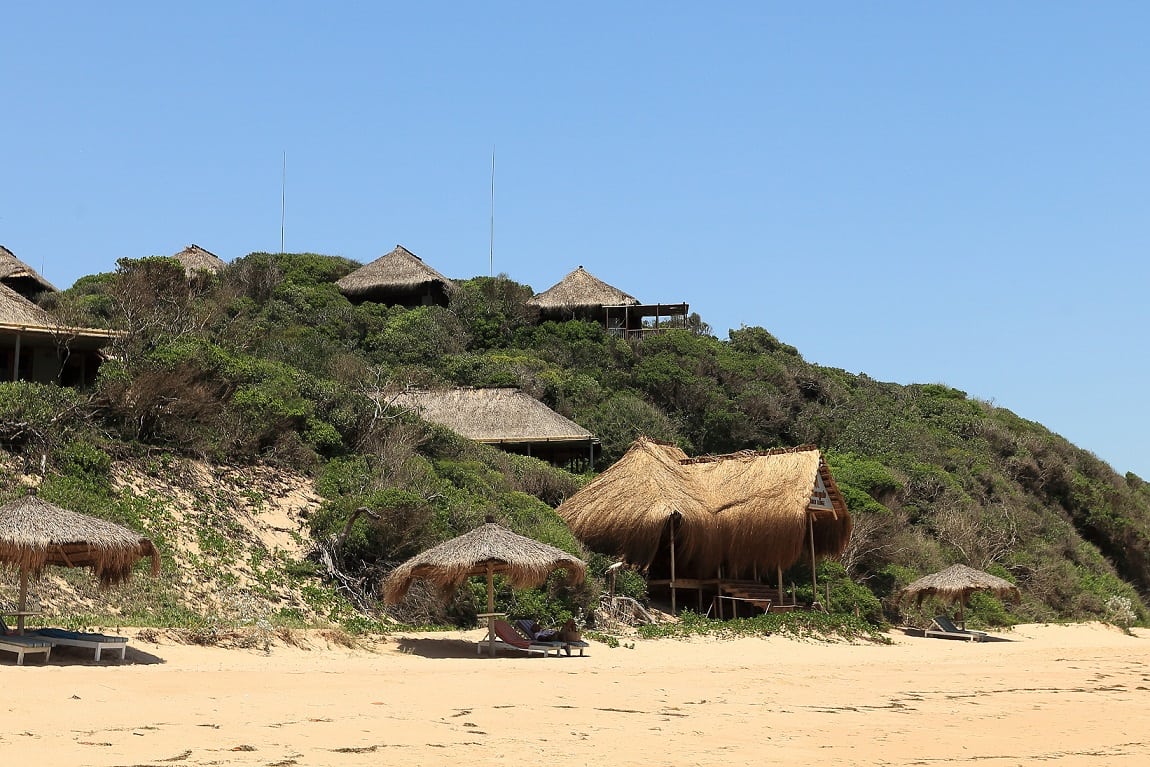 Further round the peninsula is a private house, Colina Verde, which can be hired for groups or eight or more. It comes with resident staff to welcome you and settle you in to one of the most glamorous homes this writer has visited. Built using local materials, this vast open air lodge has seven tastefully decorated double rooms, most with open air showers and a huge bath set into the room, French windows opening on to stunning sea views. Colina Verde’s manager is a deep sea fishing expert and you will find yourself out at sea pulling in strange sea creatures from the Indian Ocean. Trips to the local village, a picnic in the nearby game reserve and the lodge’s heated pool are other diversions  and if your visit is in October- November there are whales and dolphins close to the shore to watch.

For a Robinson Crusoe experience on the Machangulo peninsula there is Anvil Bay barefoot beach camp. Somewhere between 5-star accommodation and yurts, accommodation is all but hidden from view, buried in the bush at the back of the 10 km- stretch of empty, pristine beach.. Except for the awning-covered dining and bar and recreation area you’d never know there was a resort here. The bungalows are built around the vegetation so that trees stick up through the boarded verandas and lights hang from the trees. The place is eco friendly and non-exploitative: staff live in modest bungalows of their own, heat and light and the washing machines come from a solar array and water is from a deep well. Activities include fat bikes, scuba diving, fishing, treks through the reserve and meandering along the beach in the early morning. Turtles come up to lay their eggs in November and whales and dolphins pop up at regular intervals over October- November. The camp is part of a trust held by local people and profits are dedicated to their welfare. Wi-fi hotspots keep you in touch with the outside world if you really need it but you are as far from civilisation here as it is possible to get. 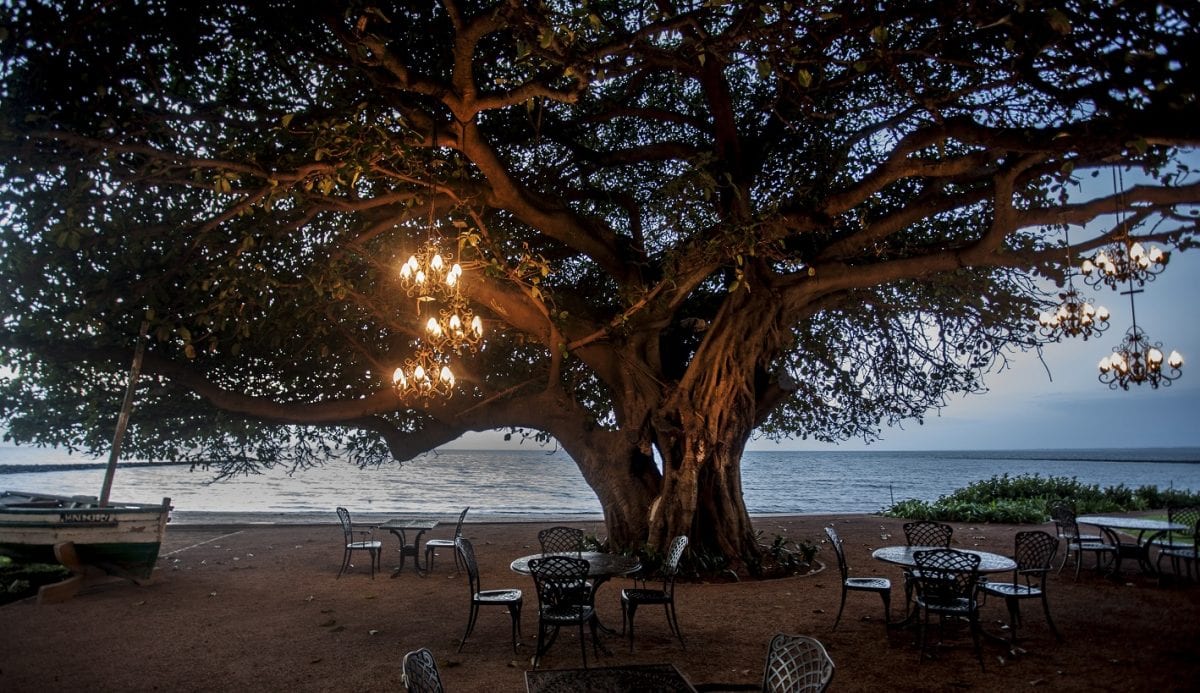 From the sublime to the shamelessly luxurious, White Pearl is further south on the coast. Here a series of suites and rooms are built into the hillside overlooking the ocean in a vast complex of bars, restaurants, pools, barbecue areas ,sitting rooms and sports centre. Each room has its own tiny pool, deck and loungers,  an outdoor shower and integral bath. Decorated in modern white and blue, the rooms are filled with every bit of tech you can imagine while a personal butler is on call for extra pampering. Best of all is the helicopter flight from Maputo airport, flying low over the nature reserve, giving a bird’s eye view of the private lives of the creatures that live here. Whales, dolphins and endangered turtles are here in their respective seasons while the reef creatures are present all year round.

If White Pearl is a little too rich for your taste a simpler yet wholly unusual place to spend your time in Mozambique is in the north of the country. A flight to Pemba and then a light aircraft brings you to Ibo Island. A century ago it was a thriving little Portuguese settlement with stone buildings, shops, a bank and some grand houses. Independence came, the Portuguese left and the buildings which had stood for a century or more began to crumble into their constituent parts. Now a strange, ghost town survives, its silence disturbed only by the quarrelling goats which roam the streets and the children playing kickabout with balls made of plastic and string. Some buildings have been reclaimed and turned into the police station, the school, the clinic and three guest houses which make the place a dream to visit. Best of the lot is Ibo Island Lodge, converted lovingly from the governor’s mansion and two other buildings. It sits alone facing the sea, with mangrove swamps and strange seabirds enjoying the solitude. The lodge has beautifully tended gardens filled with bougainvillea, African lilies and weaver birds, a pool, and a rooftop bar and dining area where evening cocktails watching the sky darken are a must. The trip to Ibo Lodge from Maputo can be arranged through Mahlatini LuxuryTours in Belfast (028 90736050) and, being experts in African travel, could organize your entire holiday in Mozambique.

TAP Portugal flies from London Heathrow & Gatwick to Maputo via Lisbon three times a week, prices start at £575 return including all taxes and surcharges. For further information, visit www.flytap.com or call 0345 601 0932.