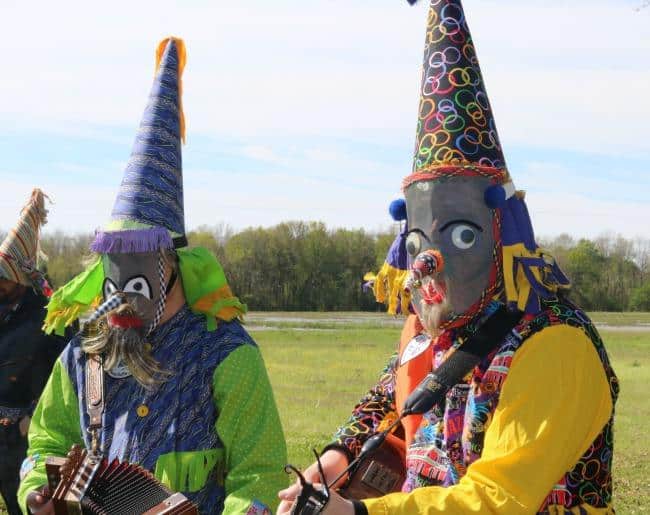 Under a sharp Arctic-blue sky, I’m slowly turning into ice on a stationary open-top float as I stand armed – both metaphorically and literally – with hundreds of beaded necklaces to throw into the crowds for Lafayette’s Mardi Gras parade. It’s a freakishly cold spell for this usually pleasant part of the world, but winter sun won’t ruin the day. In its 85th year, Layfette’s parade is too big to fail.

New Orleans is the most famous city for Fat Tuesday, but Lafayette’s is Louisiana’s second largest. Somehow, it’s largely dodged the tourist trade, and it’s all the more authentic for it. On the domestic flight on the way in, I sit next to a superfriendly lobbyist who works in Washington DC but is returning home for Mardi Gras weekend. She tells me about the well-practiced party and parade schedule that lies in store for her and her friends. On the day itself, most of the cars that clog up the side streets have the distinctive Louisiana license plate, though the two gents loading me up with beads are visiting from Texas, the next state along.

The queue of waiting floats curls around the corner, as crowds mark their territory along the four-mile route through its centre. Some position their pick-up trucks in prime slots, and bust out the crates of beer, trays of Po’boys (Louisianan baguettes) and speakers to rival the procession’s music. When the parade gets going, most of the kids run up to the floats, which loosely follow a striking colour theme of purple, yellow and green. They come with their hands outstretched and on their parents’ shoulders, for the best position to catch the beads, treats and candy that are constantly dished out from the parade. A few enterprising spectators are ready with their fishing nets, or have fashioned together hat-buckets for the occasion.

The route makes its way across a city centre that has become familiar to me over my visit. It touches Jefferson Street, the main drag of the city, crammed with Cajun restaurants, bars and shops. It snails past the ultra-modern Acadiana Center for the Arts, which is an expansive gallery and upscale music theatre. And it ends with a Grease-style funfair outside the Cajundome arena that’s heaving despite the low temperatures.

This, the independent parade, is the last of the Mardi Gras season, and arguably it’s the least cool one as the floats comprises of advertisers, companies and local politicians. The cool ones ran in the week preceding, set up by local creative groups (krewes) aiming to outdo each other with the fabulousness of their floats.

This is the urban side of Mardi Gras, a celebration that began as a feast of rich foods before the lean period of Lent. In the 18th century, the celebration became a strong tradition in the French colonial areas. The first celebrations took place in New Orleans in 1710s, and grew – by way of masks and balls – into the beaded-necklace party we know today. But in the outskirts of Lafayette, the more traditional elements have continued alongside the glitzy street procession.

To find out about it, I visit Barry Ancelet, a folklorist in the 2,000-strong community of Ossun.

“I’ve seen adults slap down five-year-old kids to get beads – you must wake up the next day surrounded by beads wondering what you were thinking,” Barry says of the city Mardi Gras. We’re speaking at his house in Ossun, or more specifically, his sociable kitchen that’s big enough for his large family of kids and grandkids, whose pictures are found in frames on every spare ledge.

Barry and his wife are spending the day making a giant gumbo, the famed Louisianan stew crammed with crayfish, pork, chicken and vegetables. It’s traditional feasting food after the Courir de Mardi Gras, a recently revived daytime tradition in which rowdy groups dress up in costumes, masks and hats. Suitably anonymised, they go around their community in a wagon, making door to door mischief and entertainment. And there’s daytime drinking involved, we’re not going to lie.

The house visits are ostensibly to ask for ingredients for the gumbo they’ll all share at the end of the day. The tradition has morphed from asking the donation of a live chicken, to carrying one around throughout the day and chasing it as it escapes – hence the name of the Mardi Gras run.

“It’s part of the hilarity the group brings,” explains Ancelet. “The chicken’s eggs were valuable in traditional homes, so donating one is like turning over the money maker. So the group give a party in exchange. They turn up to the house in beautiful coloured costumes making people laugh, playing games. And it’s worth it apparently, because it’s still happening.

“The tradition is in a similar vein to the ones between Halloween to Easter time that is otherwise a dead time [in the country],” he continues. “They involve processions, begging, costumes, performance for a donation. It needs players and hosts. And a donation is an expression of solidarity.”

The run isn’t usually an activity in which visitors can join in or watch, as it’s an exchange between the community, akin to Hallowe’en. But some runs, like the one in nearby Eunice, have evolved to welcome onlookers. Be warned: given that their M.O. is to cause mischief, don’t be surprised if you find your hat flipped backwards or your shoes tied together. Ancelet compares the laughter elicited to that of tickling: it’s funny and you laugh, but also you’re wondering when it’s going to end.

Later that day, I’m privileged enough to follow Ossun’s run for a bit, brought along by a long-time participant, Jesse. By the time we meet the group, they’re dressed up in their raggedy fabric costumes, with masks and pointy hats, the shape of which is meant to recall clowns rather than anything more nefarious. We catch up with them causing havoc and chasing the chicken in a neighbour’s field. They’ve definitely been drinking, and they’re full of song (each run has their own anthem – Ossun’s is an evocative call-and-response folk tune, sung in French).

Not the first to volunteer in performer-audience interactions, I’m a little nervous about the extent to which they’ll fool around with me. But the tomfoolery is mostly between themselves, and there’s the capitaine (the leader) of the run to keep everyone in check. When one person keeps another in a playful headlock for a little too long, the capitaine cracks his whip like it’s part of the game rather than its parameters.

As some chase the chicken and others roll in the frosty fields, one of the group slides up to me and puts their hand in my coat pocket, which makes us both giggle. And when they pile in to Ossun’s grocery store to wheel each other around in the trolleys, mix up the items on the shelves and hold an impromptu sing-song, they don’t mess with the shoppers who glare at them while trying to buy their sausages and biscuits. When it’s time to go, the capitaine yells for the Mardi Gras to retreat (spoken as if the collective personifies the day) and just as loudly as they enter, they return the right goods to the right shelves and pile back into the wagon, onto the next place. Truly, it’s impressive how drunk and respectful they are at the same time.

It might not be the Mardi Gras that most get to see, but it’s a reminder that there’s authenticity and community spirit behind Lafayette’s Mardi Gras celebrations. One to remember if you ever find yourself lunging for beaded necklaces like the jewels were real.

For more info on what to do and see in Lafayette, see Lafayette Travel.