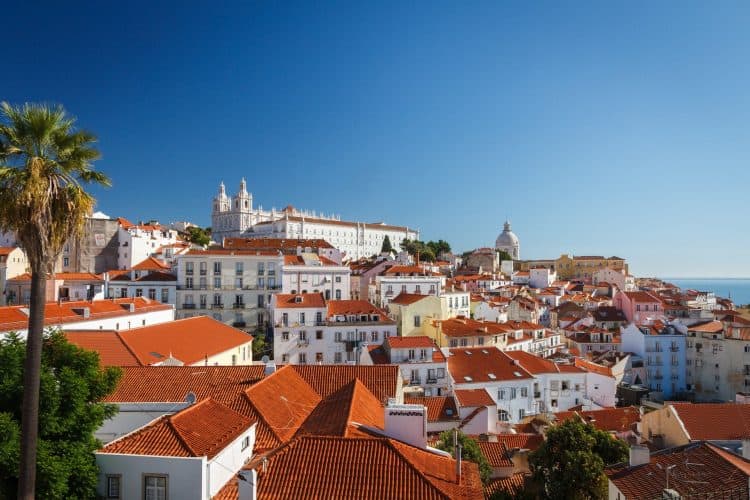 I arrive at Lost In, a well-known rooftop bar in Lisbon, and tell the waiter I have a reservation at 8 pm. He looks at me blankly, then says, “yes, but your name, what is your name?!” in the same tone a teenager uses when asked to clean his bedroom. Rather than express my displeasure at his manner, I do the classic British thing: smile, tell him my name and take my seat (then say I’m going to the bathroom and sneak out through the back door).

Now I’m hungry on a park bench, replaying lines in my head I wish I’d said, knowing I never would. It’s chilly and gustier than you’d expect for late spring in Portugal and, like a proper tourist, I’m wearing a thin t-shirt and shorts. I stop arguing with myself to work out what to do next. Then something happens.

A tall man wearing navy overalls and a pensive look starts playing Sergio Mendes’ Mas Que Nada. He’s standing beside the tree-lined park of Jardim do Príncipe Real, singing into a microphone behind an upturned trilby and an illuminated sign that reads ‘Udi Fagundes’. It shouldn’t be a spectacle to see a busker busking, but having gone without live music for over a year, it is.

Goosebumps spring up across my body like whack-a-mole, then, before I know it, I’m crying. Not funeral tears, but the kind my mam sheds watching a children’s act on Britain’s Got Talent. In front of me, the sun fades behind a Jamie Oliver restaurant that shouldn’t be there, while groups of youngsters, loved-up couples and boozy foreigners stream by, occasionally tossing a few euros into Udi’s hat.

I arrived in Lisbon a week earlier on one of the first legal flights out of London since lockdown three. “You’re our first British visitor, I think”, the manager at Urbano FHL Hotels – a new contemporary hotel in the centre of Lisbon – tells me on arrival. I throw my bags in the room, then head out for a wander. Most Lisboetas seem happy to have British tourists back, except one souvenir shop owner who tells me, “British people don’t buy much, anyway.” He’s waiting for the Brazilians and Italians (big spenders, apparently).

At Maria Catita, I order a beer, water and tuna steak without checking the price (dear reader, I’m a travel writer in the middle of a pandemic). One bowl of olives, a stack of bread, a tuna steak the size of an Elephant’s foot, and a glass bottle full of premium mineral water – so big it could put out a bonfire – later and the bill arrives… €25. I let out an audible sigh of relief and pay up.

Strolling through the massive Praça do Comércio after lunch, I reach a small esplanade facing out to the Tagus river. The Ponte 25 de Abril bridge – named after Portugal’s carnation revolution on the same date in 1974 – reaches across a blue sky to Almada on my right. Kids with faces plastered in ice cream play freely, as a smiley veteran paddles in the water and a lady poses for photos with her arms spread like Kate Winslet in the Titanic. Holidays are back.

I spend the rest of my afternoon eating petiscos (small plates) while fighting to stay on precariously placed seats and juggling cutlery sliding from slanted tables (Lisbon has seven hills, most lined with restaurants). Like the one at the excellent Taberna Portuguesa where I find out two sharing plates of mushrooms sautéed with coriander and pork ribs in beer marinade is more than enough for a slender man.

A waitress tells me to visit Praia da Cova do Vapor beach by taking the boat from Belém – a former seafaring neighbourhood that’s home to the impressive Torre de Belém fort and Pastéis de Belém bakery – known for its long queues and famous custard tarts. After dinner, I mooch up to hipster rooftop bar Park (it’s at the top of a parking lot), then straight back out when I realise I’m nowhere near cool enough to be there.

The following morning, I go for swish coffee at Hello, Kristoff – a corner café with pale pink and white flump-like walls, a high-end magazine wall and lots of millennials hunched over Macs. The lovely French owners, who opened the cafe during the pandemic, advise me to check out Cascais and Sintra while I’m in town.

Around the corner, Helena Henriques smiles as she shows me a Louis Vuitton’s guide to Lisbon, where her shop Wetani is listed. “I was a little bit worried when I opened but since this, we have started doing well” she beams pointing at the book. Helena quit her job in the corporate world to open the shop. It’s a pretty place with stacks of abstract prints, brightly coloured earrings, ceramics and handpicked women’s clothes. I round the day off with some superb shrimp tacos at Paloma Negra – a Mexican pop-up currently hosted at hip, minimalist brunch spot The Mill from 6 pm-10pm on Thursday, Fridays and Saturdays.

I spot a tiny red and gold art décor kiosk called Quiosque de Sáo Paulo on my final day in Lisbon. Marta, my waitress, translates the menu for me and confidently recommends a cured pork sandwich. There’s plenty on offer, so I ask where they make everything. “We get it from the hotel around the corner; we have a scooter boy that brings it to us.” She explains.

Nearby a bloke in a cheap suit inhales fags like he’s in a chain-smoking contest. The sun is high in the sky, and the trickling sound from the fountain behind me is disrupted only by trams and buses that chug by. My restaurant-quality smoked pork and pickle sandwich with cucumber and mustard mayo arrives almost as quickly as my beer – and is polished off as swiftly as the lemon and kiwi tart that follows (all for €10).

Back on the park bench, Udi finishes his set. We share a beer, chatting about Bolsonaro, the flamenco in Sevilla, and his upcoming gig at Flores da Pampa – a cracking restaurant with wacky decor and a sunken dining room that plays live music. And before he rushes to catch the bus, I thank him for reminding me of what I didn’t realise I’d missed.

People-watching in sunny plaças, wandering without purpose, and allowing bad experiences to transcend into serendipitous encounters with folk I thought I’d never meet. On my walk home, the temperature drops, and I remember I haven’t eaten, then my battery dies. I’m hungry and lost in Lisbon, once again, but perfectly content.