by Mischa Mack Thirteen years ago my husband and I, married that day, waved goodbye to family and friends through the rear window of a 1957 Armstrong Siddeley. It was midnight, we were giddy with excitement and had no idea where we were headed. My parents had arranged a surprise hotel for our wedding night. […] 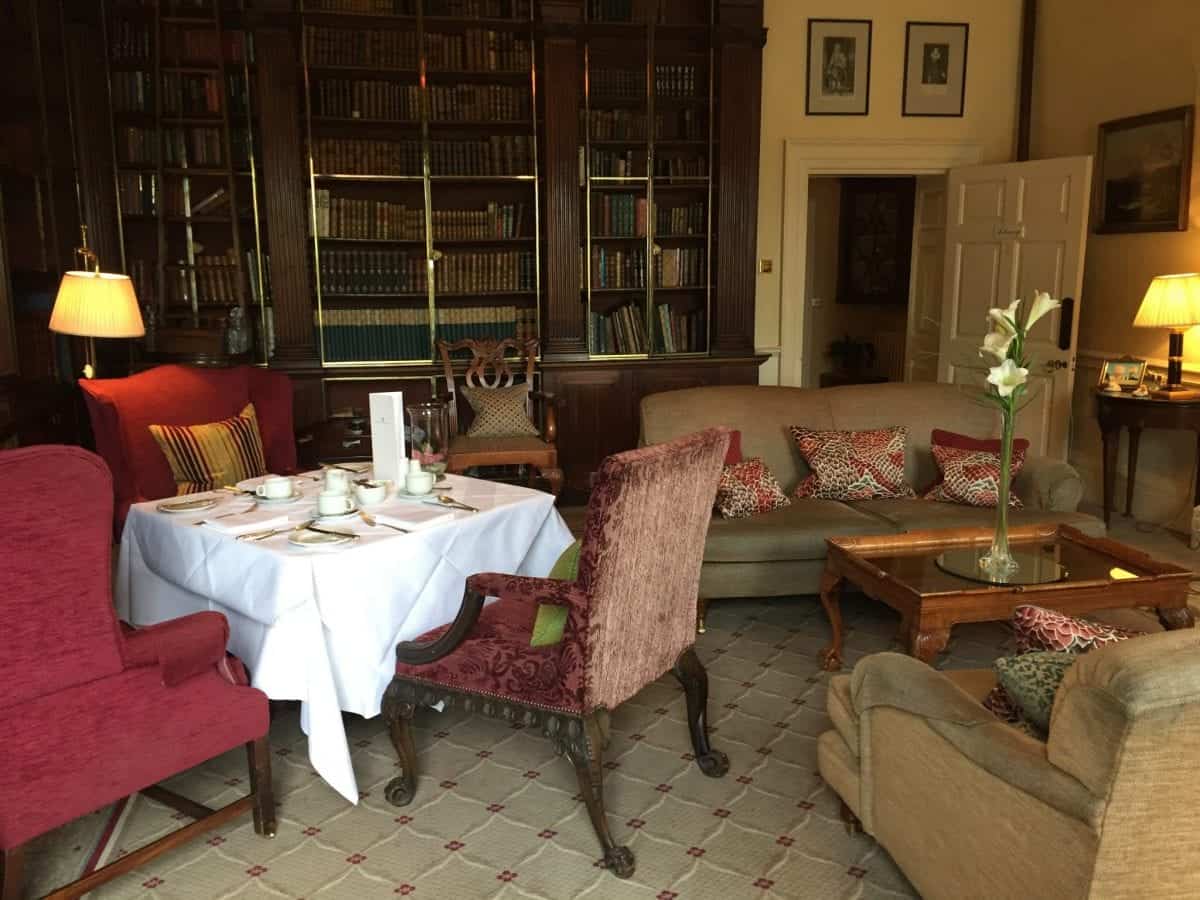 Thirteen years ago my husband and I, married that day, waved goodbye to family and friends through the rear window of a 1957 Armstrong Siddeley. It was midnight, we were giddy with excitement and had no idea where we were headed. My parents had arranged a surprise hotel for our wedding night. In stately fashion we rolled through Wiltshire villages, dissecting the day with feverish hilarity. We laughed at the vicar asking my dad not to smoke in the church, and wondered which of the guests would have the biggest hangover in the morning.

The first 30 minutes of the journey passed quickly. By 45 we were yawning. An hour in, not only were we in Somerset but also beginning to wonder if this was some passion-killing plot conjured by my parents. But come on, we’d been together for six years…surely it was a little late for that?

When we eventually arrived at Ston Easton Park, a Palladian mansion in rolling parkland – 11 miles from Bath and 13 from Bristol – the schlep made sense. The understated elegance of the place, and the beauty of its surroundings (which we didn’t discover until we opened the bedroom shutters the next morning), has since remained with me. 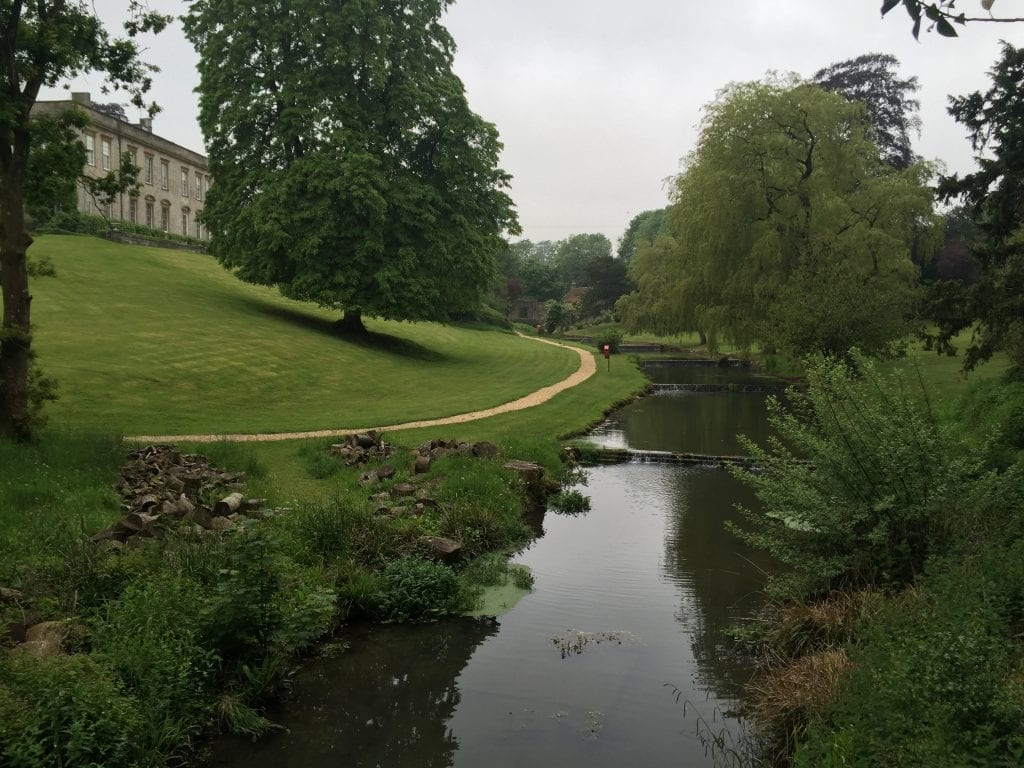 On this return visit the hotel, which feels more like a grand home with just 20 rooms, was exactly as I remembered it. Except this time the passion-killing was entirely self-inflicted. 13 years and two dependents later, gazing into each other’s eyes, even for a moment, was out of the question. Between a nine-year-old daughter who jammed her z bed in line with our four-poster and insisted on talking until midnight, and a self-important miniature dachshund who slept draped across my neck, this was never going to be a bring-your-flameproof-nightie occasion. 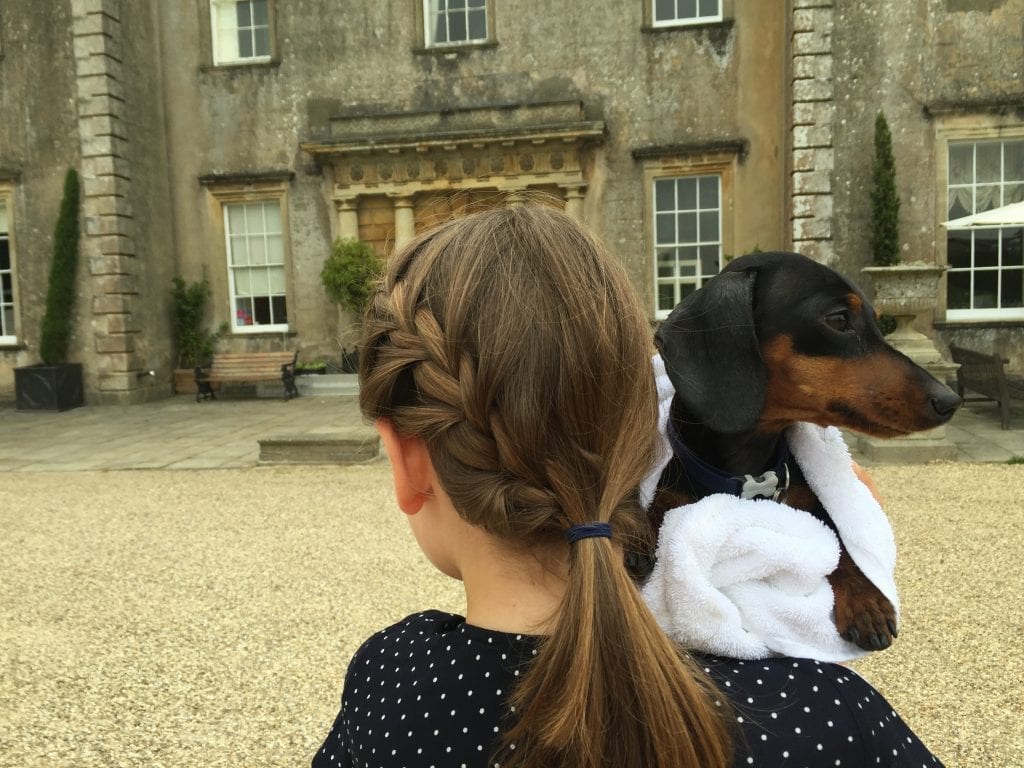 Now if luxury means marble bathrooms with rainfall showers, Shrager-esque interiors, Plasma televisions, a spa the size of Luxembourg and an infinity pool, then Ston Easton isn’t in the least luxurious. However, if luxury can mean Downton Abbey-like sumptuousness, antiques and oil paintings, bold and elaborate fabrics, furniture you sink into, and old-school reverential service, then here is its epitome.

The satisfaction of staying at Ston Easton is rooted in simple pleasures that have survived through the centuries. There’s no spa, no swimming pool, no gym, no tennis court. Instead, there’s 36 acres of gardens and parkland created by the last great English landscape designer of the eighteenth century, Humphry Repton, to explore. Behind the house, a well-kept lawn runs steeply down to a river which bulging willows weep into and ancient little bridges adorn. Tucked away, here you’ll also find the Gardeners Cottage, a cute but substantially-sized property with three bedrooms.

If you don’t have your own dog to walk you’re welcome to borrow Oscar, the resident and rather aged cocker spaniel. Our feisty mini beast, Buddy, unexpectedly took his first wild swim here. Judging by what happened to parts of his anatomy, it’s safe to say the water is extremely cold.

The food at Ston Easton Park is classic yet inventive. Head Chef Martin Baker has worked with Marco Pierre White and Gordon Ramsay and it shows. The Wiltshire ham hock starter, decorated with tiny green leaves and a white flower, is served with a savoury truffle, pickled beetroot, a quail’s egg and piccalilli – an unusual but pleasing combination of tastes and textures.

For the main course I chose roast turbot, its grape and chive sabayon wonderfully subtle and light. Served with buttered tarragon tagliatelle and pak choi, I wondered whether there would be just too many flavours, but each was distinguishable and the saffron still came through. I’d only ever had a raspberry clafoutis, so I was intrigued to try the hotel’s apricot version. The accompanying almond ice cream and mint crème fraîche were the highlights; this classic French dessert needs to be really fruity and fluffy and this one didn’t quite hit the mark.

Given the splendour of Ston Easton Park’s public rooms – including the main lounge, the Saloon, which has been described as ‘one of the finest rooms in Somerset’ – you might expect a degree of stuffiness. On the contrary. Guests are encouraged to feel at home and, unasked, went to the trouble of setting up a breakfast table in the library (where original mahogany bookcases remain intact) so that Little Prince Buddy could join. The continental breakfast is disappointing but the delicately presented Full English (my husband’s choice) is, I’m told, even better than 13 years ago.

Ston Easton Park isn’t an obviously family-friendly hotel, nor does it claim to be. Our daughter loved the hotel’s grandeur and its grounds and is capable of sitting more or less still for a protracted evening meal. But if you need ball pits and baby listening, this place isn’t for you. For couples, particularly dog-owning ones, it’s a dreamy getaway. And if you’re looking for a wedding location, it would be hard to find a more quintessentially English setting…and there’s a lot to be said for having your wedding night accommodation on site.