For a reason unbeknownst to us, Portugal is a hotbed for spa hotels. Probably more than any country in Europe per capita, there are swathes of luxury retreats with promises of R’n’R, coming away a new person, and stepping away from the hustle and bustle of the world. We want all of that. To our […] 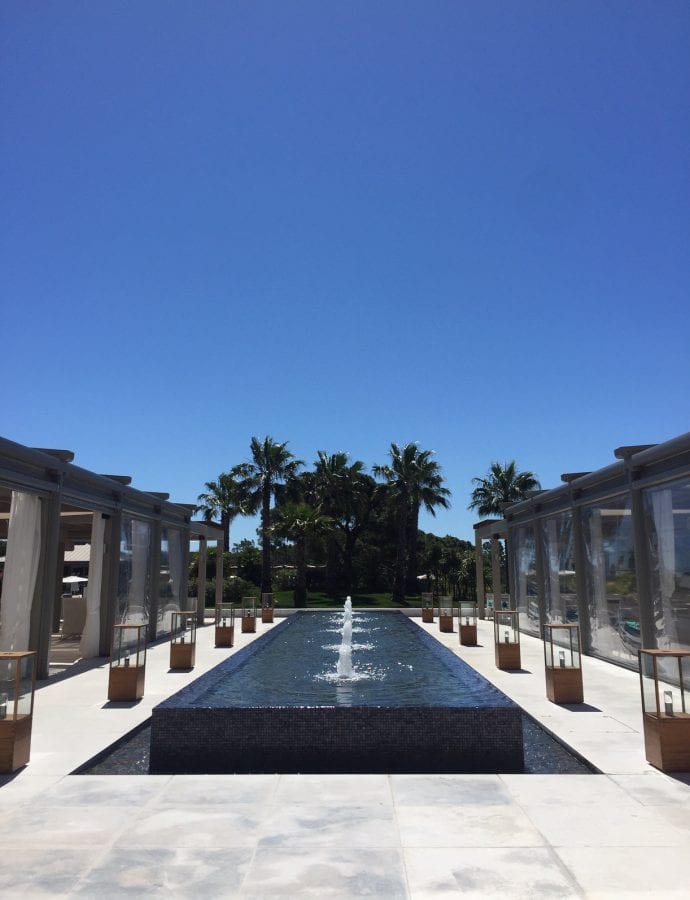 For a reason unbeknownst to us, Portugal is a hotbed for spa hotels. Probably more than any country in Europe per capita, there are swathes of luxury retreats with promises of R’n’R, coming away a new person, and stepping away from the hustle and bustle of the world. We want all of that. To our room, please.

Having last year holidayed in the Portuguese beach town of Cascais, where the sky was cloudless, the veggie food was terrible and the wine was plentiful, this time around my BFF Laila and I were only too happy to be wooed by Epic Sana’s promise of five-star pampering in its Albuferia resort. Especially as I felt it was time to get over my prejudice against the Algarve – even saying the word out loud makes me shudder a little. So, packing as many Nakd bars as possible, off we went. And here’s how we found it…

A half-hour, €50 ride from Faro Airport in Portugal, Epic Sana is right on Albuferia’s coast, with a walkway leading from the hotel to the sandy beach. The area is typical of the Algarve, with lush greenery on top of rocky cliffs, which shade the beach like God’s own windbreaks. Town-side, there’s the usual stuff for Brits abroad: a sports bar, pizza joint, Indian, souvenir shop.

But once you’ve made your way up Epic Sana’s magnificent driveway, there’s every chance you won’t want to leave… General room vibe
The hotel features 160 deluxe rooms, 43 apartments and 24 garden suites. Balconyed and facing the Atlantic, the twin deluxe room we had was perfect – large enough to throw the contents of our luggage everywhere, and cosy enough for it to feel like home. Like the rest of the hotel, it’s boldly decked out in strong colours – even the toilet roll is green. Some might find it too much but I adored their conviction, and loved staying somewhere so different to the neutral colours of my home. That said, the biggest flaw in the hotel was found in the rooms: the bathroom had sliding doors which didn’t properly shut (as the picture shows). Even if they had, the paper-thin makeshift ‘walls’ and amplifying, echoey room means courting couples might want to being an extra pair of earplugs. Did I put that delicately enough?

Stealability of toiletries
There are certainly travel sized goodies to steal, but not a name-brand, so best just to leave them there and save room in your clear liquids bag for little bottles of port.

Shower amazingness
Yes, the shower was amazing. It was strong, had both a rain showerhead and a hand-holdy one, didn’t splash, and the temperature was easily controlled. Just remember to check the room is vacant before singing in it.

Wifi strength
It couldn’t be better, both in strength and reach – even the pool bar away from the main reception had excellent wifi. There’s no need to keep logging in either. Once you’re in, you can stream to your merry heart’s content – good thing too as there’s only a couple of English channels, though one did show movies.

Spa fun
In the main block with the indoor pool, gym and ever-popular yoga studio lies the lightly-scented treatment rooms, complete with panpipe music. Just being there and donning the comfy robe is enough to send the blood pressure down a few levels, let alone when the therapists get their hands on you. I went for the Sayanna’s signature massage, for which I got a male masseuse. Concerned for his eyes, I was apprehensive about this, but it turns out the extra strength made me care less – it was a heavenly stress-reliever, and melted away every ache in my body. While the massage took every last knot out of me, on the last day I had a facial which I’d recommend if you want to feel pampered and glowing – it was 90 minutes of bliss. Dinner options
The hotel itself has three main restaurants: the pool bar/restaurant Open Deck, the buffet restaurant Abyad and the fine dining option, Al Quimia. Lunch always in Open Deck, the only place serving food at that time. The food here was as heavy or light as you’d choose. While the salads were giant and tasty, it must be said, it was a little pricey for the food served (a ‘mystery meat’ chicken burger at a five-star hotel?) and I ran out of veggie options after the second day.

But if a change takes your fancy, cafes and pizza joints lie just outside the hotel. While the food wouldn’t be anything to write home about, it will tide you over between a delicious breakfast and a feast for dinner.

Most nights we opted for the €39 buffet at Abyad; we’re suckers for all-you-can-anythings. The first course was arguably the most interesting, with delicate portions of creatively presented starters. Not only did these include salads and meat cuts, but also smoothies, just in case you’re hankering for a shot of nutrition. The main meal wasn’t the best I’ve had; to ensure the food didn’t go dry it was bathed in oil which settled at the bottom of the dish. And as with the rest of Portugal, they’re not naturals with flavouring food – attempts like the orange and ginger chicken were clumsy and most dishes were plain and not well-cooked. But there was enough of a choice – especially for seafood-lovers – to cobble together a tapas-style dinner that left you satisfied.

On the last night, despite the hotel being taken over by a conference, I tried out the fancy restaurant, Al Quimia. I didn’t warm to the place immediately; the decor was lovely but standard for hotel fine dining restaurants. Thankfully the food marked it out as something special. The chestnut soup was served with truffle, whole mushrooms and an egg yolk on a nest of noodles that had cooked by the time you took your first mouthful. The main was a choice between cod and guinea fowl, so it was only vegetarians treated to two hunks of chargrilled tofu, the meatiest and smokiest cuts I’ve ever had. Terrific. Breakfast spread
Actually, whatever about dinner THERE WAS SELF-SERVICE PROSECCO AT THE BUFFET. Holiday = made.

Overall
Following the sun’s example, we took a shine to Epic Sana. It’s small enough to feel intimate, but large enough to have all the amenities you’d need – plus, unlike my expectations, there’s a good mix of European clientele so it’s not just Brits abroad.

Kinks can be found if you’re looking, but as far providing the right environment to recharge the batteries and act as bonding time for me and my pal, it was…well, epic.