Review by Leslie Byron Pitt/@Afrofilmviewer Carl Bernstein: All these neat, little houses and all these nice, little streets… It’s hard to believe that something’s wrong with some of those little houses. Bob Woodward: No, it isn’t.    – All The President Men, 1976, Alan J. Pakula. Like so many recent Oscar Winners. It’s easy to feel, […] 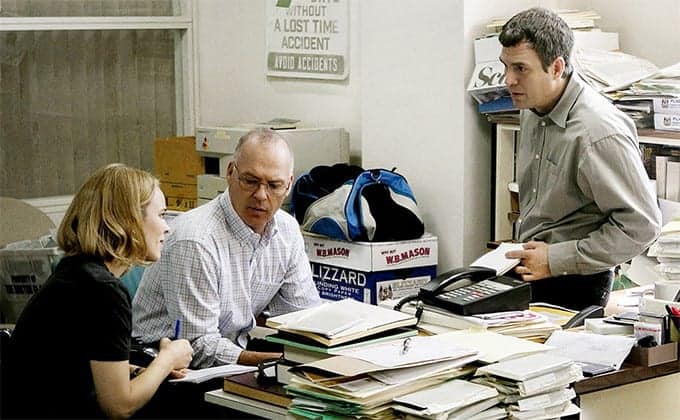 Carl Bernstein: All these neat, little houses and all these nice, little streets… It’s hard to believe that something’s wrong with some of those little houses.

Bob Woodward: No, it isn’t.

Like so many recent Oscar Winners. It’s easy to feel, much like the #OscarSoWhite hubbub, that Spotlight has already seemed to be forgotten. The likes of Mad Max: Fury Road and its director is still being mentioned in film sites across the web, but the trail of talk for this analytical drama has seemingly gone cold. Spotlight has often compared to the aforementioned classic investigative drama;  All the Presidents Men (with good reason), but it’s been clear from when The Dark Knight (2008) did not gain the award recognition, that audience’s perspectives are quite set on what should be considered the “best” picture.

The spectacle may well be what casual audience’s heads are more likely to turn towards, but this doesn’t mean that Spotlight is no slouch. It’s pocketing of Academy Awards only highlight the film’s strengths. Be it the solid cast of likable character actor veterans or the delicate, near invisible direction from a formidable independent director. Spotlight is type of smart and incisive film, which always does well with Academy voters. It’s quite simply a well-oiled machine.

Spotlight also delves into areas and themes that clearly make the Academy tick. As an account of the Boston Globe’s investigation of widespread and systematic sex abuse of children by Catholic priests, Spotlight taps into the type of topical themes that often find themselves showcased at award shows. It’s a film which highlights solid investigative journalism. A seemingly dying trade slowly crumbling from under our feet due to the blogging and citizen journalism. The dogged, determined sniffing and seeking we witness in Spotlight, often displayed by the dishevelled Michael Rezendes (Ruffalo), neatly harks back to the single-minded work, we notice from Redford and Hoffman’s portrayals of Woodward and Bernstein in All the Presidents Men. The similarities don’t end there. Both films show their journalistic teams pushing against the grain of public consensus. The Spotlight team are lapsed Catholics, living in a city with a largely catholic region. Distanced enough to view their case with scepticism, yet close enough to feel the communitive and emotional pull that the church holds over the district. In the same way, Woodward and Bernstein discover the Watergate scandal just as Nixon was re-elected by one of the largest landslides in U.S history. The strength of both films lies in the resilience of the protagonists as they scrutinize these powerful establishments.

Along with Masanobu Takayanagi wide, bright photography, director Tom McCarthy helps present the city as a character in itself. Details of the case are conversed openly through wide open city spaces. We don’t really get near a close up until the midway point of the movie. McCarthy is more interested in keeping the environment in view. People working. Kids playing. What we’re seeing is a secret in clear sight. “Boston is still a small town.” States Boston’s Cardinal Bernard Law. “The city flourishes when its great institutions work together.” A comment which only helps flaunt just how far we’ve tumbled down the rabbit hole. Consider Bernstein’s neat little houses.

As with so many investigative dramas of its ilk, Spotlight delivers pushes the depth of the scandal with tried and tested methods. We see the montages of reporters roving through the city talking to anyone that will. We see the team stonewalled by smug antagonists who clearly know more, and of course, where would a film like this be without trips to dark dusty achieves to discover long forgotten key evidence. These aspects are to be expected in a film such as this, but because of the way the cast sells each moment, you forget the mechanics. Ruffalo again shows his formidable ability to lose himself in a role as Rezendes. Rachel McAdams’ portrayal of Sacha Pfeiffer can sometimes feel like a loose limb, but this is never down to her quietly confident performance. The same goes for Liev Schreiber, a consummate performer whose pensive performance as Marty Baron is only upsetting due to the small amount of screen time it procures. John Slattery enjoys busting chops as Ben Bradlee Jr, while Micheal Keaton brings up the rear and smooths down the edges with his effortless charm.

It is, however, Spotlight’s smoothness which goes against it sometimes. The spiky cynicism that seeps through so much of something like All the President’s Men isn’t felt as sharply here. It’s true that the sense of peril may be somewhat diminished here, particularly with how a modern audience views the likes of religion as well as journalism. This doesn’t stop some Spotlight’s more wistful moments about the finer parts of reporting from hitting home. There is a satisfaction in watching all the films puzzle pieces fall into place.  A vindication in seeing a certain amount of justice taking place, despite the outer conflict feeling somewhat softened. The beauty of Tom McCarthy’s Spotlight is that by the time you question such things, the credits are rolling.

Spotlight is out on DVD/Blu-Ray 23 May